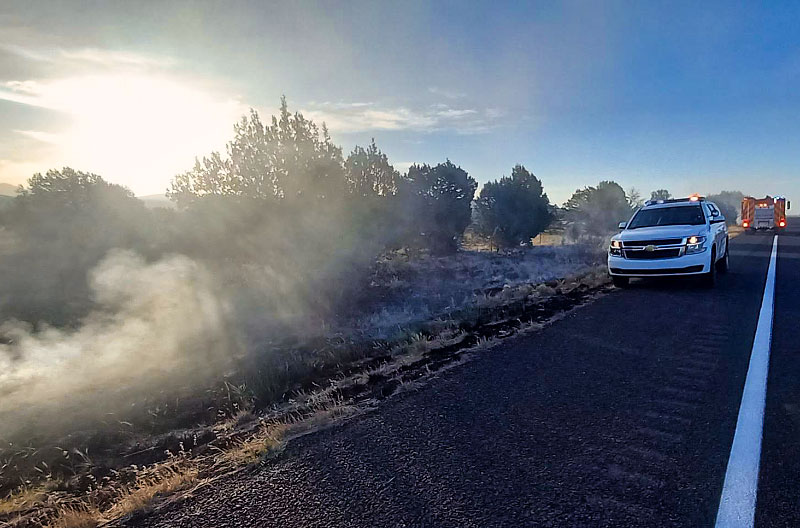 Dragging chains can cause wildfires

PRESCOTT ARIZONA (June 6 ,2022) –With wildfire season upon us, YCSO wants to remind residents of the danger that a dragging chain from your vehicle can cause and ask that you be aware of anything that may ignite a spark from your vehicle.

Around 4:15 Saturday morning June 4, 2022, YCSO dispatch received a call from Department of Public Safety (DPS) to report a fire east of Hwy 89 near mile marker (MM) 354. It should be noted that a similar fire was found just an hour prior at MM 340 and was extinguished by responding deputies and doused by fire personnel. When YCSO deputies arrived on scene to the second fire, personnel immediately began to assist DPS with extinguishing the open flames and flare-ups using only what they had in their patrol vehicle; a fire extinguisher and a shovel. Deputies were able to control the fire to smoldering until an Ash Fork fire crew arrived and doused the remainder of the fire. The fire was out by 7:44 am and burned approximately 100x25 yards of dry fuel source but could have been far worse. For safety’s sake, personnel scanned the stretch of highway for any further fires – none of which were found.

Deputies determined the cause of the fire was likely due to dragging chains from a vehicle which created sparks on the roadway that caused the dry grass to catch fire.

Due to quick action, preparedness, and teamwork between YCSO deputies, Ash Fork Fire Department, Arizona Department of Transportation, and Kaibab Fire Department, these fires were prevented from growing out of control. In light of these preventable fires, the Yavapai County Sheriff’s Office stresses the importance of inspecting your equipment to ensure chains are properly secured.