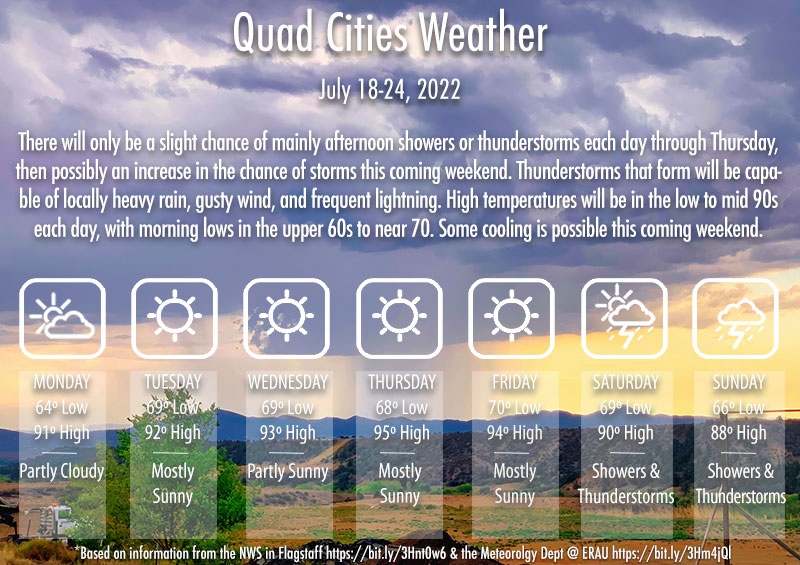 There will only be a slight chance of mainly afternoon showers or thunderstorms each day through Thursday, then possibly an increase in the chance of storms this coming weekend. Thunderstorms that form will be capable of locally heavy rain, gusty wind, and frequent lightning. High temperatures will be in the low to mid 90s each day, with morning lows in the upper 60s to near 70. Some cooling is possible this coming weekend.

A mesoscale convective system (organized as a broken line of thunderstorms) moved across the Quad City area late last night. It had begun in the early afternoon near Tucson, swept northwestward across the Phoenix area in the evening, and the eastern flank of the line moved across our area around midnight. Moisture was a bit lacking with this event, and also due to its fast-moving nature, rainfall amounts were generally less than 0.25”. However, the storm became well organized, with a relatively large vortex (called a bookend vortex) that was evident on the radar over Prescott as the line moved through our area. There was also some convection that formed ahead of the line in the Chino Valley and Paulden areas. The pressure contrasts within the storm produced a peak wind gust at the airport of 41 mph, but I imagine there might have been some severe wind gusts (over 58 mph) in some areas.

This week, the winds aloft will weaken and the high pressure aloft will build over Northern Arizona. The high pressure being centered near us will produce a bit of warming and drying the next few days. Thus, I expect that we will have a trend towards less thunderstorm activity today through about Wednesday or Thursday. Then, for the coming weekend, as the high pressure becomes centered a bit further north and the easterly winds increase a little across the region, we should see a gradual cooling trend and an upswing in the daily likelihood of thunderstorms. Easterly winds in the middle atmosphere tend to produce vertical wind shear with the prevailing southwesterly surface wind, helping to organize thunderstorms.

One of the most important ingredients for sustaining and organizing thunderstorms in this region (like the ones we had last night) is vertical wind shear. Vertical shear is a change in the horizontal wind vector with height. Normally, thunderstorms dissipate within a half hour of hour because they produce cold air near the ground that stabilizes the storm’s environment (due to the cooling of the air by evaporation and melting). The type of thunderstorm that forms in weak vertical shear is called airmass or single-cell storms. Vertical shear helps to sustain and prolong the life of thunderstorms by helping to keep updraft regions separate from downdrafts and allowing them to feed on unstable air for a longer period of time. When the winds in the lowest 10,000’ (or 3 km) change by more than about 20 or 25 mph, we tend to observe multicellular storms which are more capable of backbuilding over the terrain (leading to flash floods), and more capable of larger hail. We also can observe convective systems like we did last night when vertical wind shear is in place. This week, the vertical shear will be weaker from this afternoon through Wednesday, possibly picking up later in the week.

MetMail is an unofficial weather discussion and forecast transmitted once per week via email. Embry-Riddle offers an undergraduate bachelor-of-science degree program in Meteorology (https://erau.edu/degrees/bachelor/meteorology?campus=Prescott). Please spread the word to all potential qualified candidates!