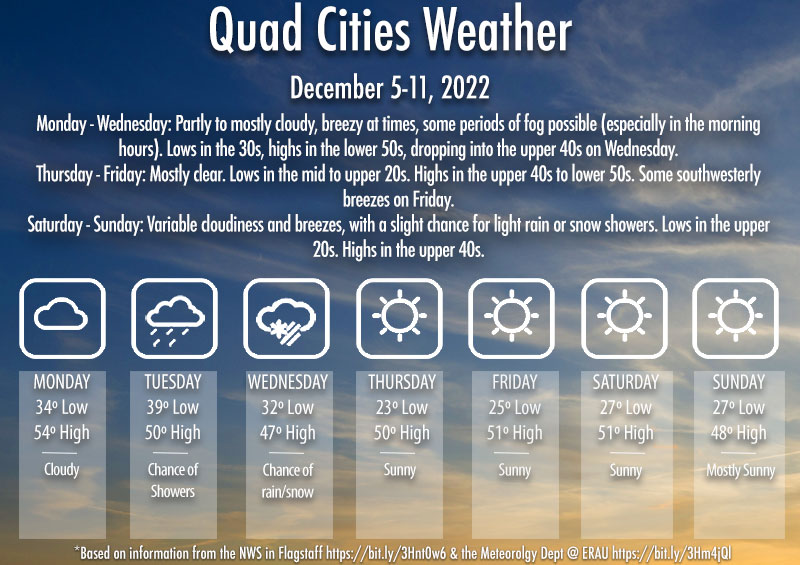 Monday - Wednesday: Partly to mostly cloudy, breezy at times, some periods of fog possible (especially in the morning hours). Lows in the 30s, highs in the lower 50s, dropping into the upper 40s on Wednesday.

Thursday - Friday: Mostly clear. Lows in the mid to upper 20s. Highs in the upper 40s to lower 50s. Some southwesterly breezes on Friday.

Saturday - Sunday: Variable cloudiness and breezes, with a slight chance for light rain or snow showers. Lows in the upper 20s. Highs in the upper 40s.

A very moist airmass moved into Arizona over the past weekend, bringing widespread stratiform precipitation to Southern Arizona. Northern Arizona had very little accumulation, but the fog/mist that rolled into the area on Saturday night to Sunday morning was impressive! I suspect that the fog was caused by the very moist air being advected into the area from southern Arizona and being lifted and cooled over the higher terrain. Fog is rare here in Prescott, especially the advection/upslope fog we had last weekend. Rather, radiation fog (which forms as the ground cools off at night and cool, moist air pools into the valleys) seems to be the more common type of fog in this area. By definition, fog is a cloud whose base is less than 50’ AGL and that lowers the visibility less than 5/8 of a mile. Mist, on the other hand, is when cloud lowers the surface visibility to between 5/8 and 7 miles.

Mist is not a precipitation type. We had small raindrops that fell around the Prescott area on Saturday and Sunday, but the correct term is “drizzle”. Drizzle is defined as small raindrops with diameters less than 0.5 mm. I sometimes hear people say “it’s misting outside”, but this is incorrect. It would be correct to say that it is “drizzling”. I also hear people say that it drizzles all the time in the Pacific Northwest, but what they should say is that light rain is common in that area (normal-sized raindrops with a low accumulation rate).

The next few days we may see some more fog or mist and light rain or drizzle, especially Wednesday, as the moist airmass hangs around. The fog/mist will be more likely in the early morning. A trough will move through the area on Wednesday, with slightly cooler and dryer air moving in behind it.

Another series of weak weather disturbances could move through northern Arizona on Saturday – Sunday for another slight probability for light rain or even light snow showers (but with little to no accumulation).

MetMail is an unofficial weather discussion and forecast transmitted once per week via email. Embry-Riddle offers an undergraduate bachelor-of-science degree program in Meteorology (https://erau.edu/degrees/bachelor/meteorology?campus=Prescott). Please spread the word to all potential qualified candidates!

This clickable map will give you an official detailed local weather forecast for any location in the Western U.S.