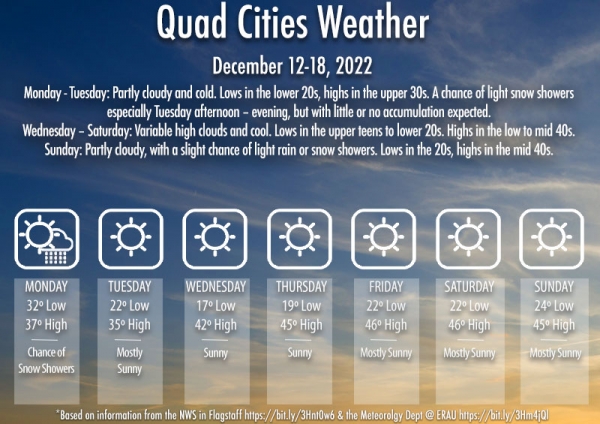 Cold weather this week, with some snow.

Latest Update, 12/12/22 9 PM: Contrary to what computer model forecasts were indicating earlier today, we have seen very localized amounts of 0.5” – 2.0” of snow in parts of north-central Arizona in the past couple of hours. Cold but saturated air persists above us, combined with weak instability and modest lifting associated with an approaching disturbance. As a result, isolated show showers have developed, some of which have been heavy at times. Some short-range computer models are now indicating that another two or three inches could accumulate this evening through early tomorrow morning over the Prescott area. Be aware that by morning, several inches of new snow could be on the ground in local areas, potentially affecting travel.

Tomorrow, additional snow showers could develop, especially in the afternoon to early evening.

Monday - Tuesday: Partly cloudy and cold. Lows in the lower 20s, highs in the upper 30s. A chance of light snow showers especially Tuesday afternoon – evening, but with little or no accumulation expected.

Wednesday – Saturday: Variable high clouds and cool. Lows in the upper teens to lower 20s. Highs in the low to mid 40s.

Sunday: Partly cloudy, with a slight chance of light rain or snow showers. Lows in the 20s, highs in the mid 40s.

It’s beginning to look a lot like Christmas! I didn’t hear any complaints today, except from those who don’t enjoy shoveling or driving in snow. The forecasts must have been pretty accurate! It’s hard for a weather forecaster to have happy customers unless his/her forecast is very accurate AND the forecast includes the kind of weather that people want to experience. ?

With a cold airmass overhead and moist air at the surface, with another weak upper trough expected to swing through the area tomorrow, expect a slight chance of light snow showers the next couple of days, especially on Tuesday afternoon - evening. Another couple of weak disturbances will move through from the northwest on Thursday and again on Friday – Saturday. Expect cool weather this week with periods of high clouds, but no new precipitation is expected Wednesday through Saturday.

On Sunday, another weak trough could move across Arizona from the west, and it will tap into enough moisture and create enough lifting for a slight possibility of light rain or snow showers.

MetMail is an unofficial weather discussion and forecast transmitted once per week via email.Embry-Riddle offers an undergraduate bachelor-of-science degree program in Meteorology (https://erau.edu/degrees/bachelor/meteorology?campus=Prescott). Please spread the word to all potential qualified candidates!

This clickable map will give you an official detailed local weather forecast for any location in the Western U.S.