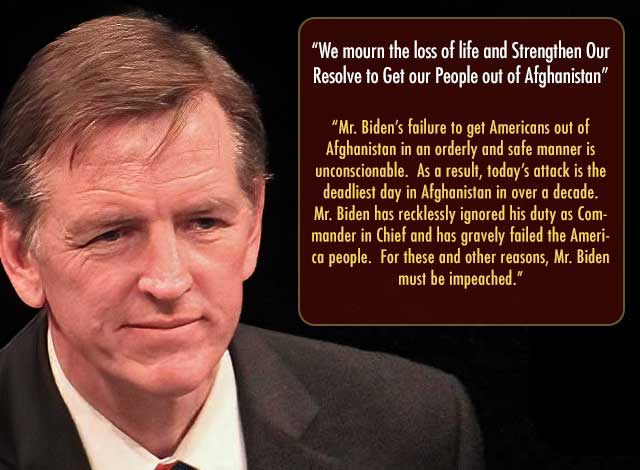 Gosar on Afghanistan Attack:  “We mourn the loss of life and Strengthen Our Resolve to Get our People out of Afghanistan”

Representative Gosar calls for President Biden to be impeached.

“Today’s tragic death of at least a dozen service members is a reminder of how grateful we are for the selfless acts of courage our men and women in uniform exhibit every day.  I am incredibly grateful for their service to our country and my heart goes out to the families of the fallen who bravely gave their all trying to protect Americans abandoned in Afghanistan.

We mourn the loss of life and strengthen our resolve to get our people out of Afghanistan.

While questions concerning the details of the terrorist attack remain, one fact is clear: the deaths of these soldiers are the direct result of Mr. Biden’s disastrous method of withdrawal of troops from Afghanistan.  This was wholly preventable.  Mr. Biden’s decision to pull American soldiers out before evacuating American citizens and equipment has sadly led to the predictable loss of American lives.  In 2019 the House Armed Services Committee was informed about the presence of ISIS-K.  The reckless manner this withdrawal was undertaken is nothing short of gross negligence and pure incompetence, and it has resulted in the panic and now death.  On top of $80 billion in lost military equipment.

Instead of rescuing Americans, Mr. Biden has been illegally flying tens of thousands of Afghans into our country.  Congress has not authorized this massive illegal immigration airlift.  We will likely face terrorist events in our country because of Mr. Biden’s illegal and immoral transport of illegal aliens into our country.  I repeat my request: focus on getting our citizens and our troops out.

Countless more American citizens remain stranded.  Mr. Biden must immediately inform the American people how he intends to safely evacuate ALL American citizens before others continue to be allowed to board American flights for safe haven to our country.  We cannot have any more loss of American life.

Mr. Biden has demonstrated an incredible dereliction of duty in Afghanistan. I supported President Trump and Mr. Biden’s decision to get American troops out of the failed 20-year war in Afghanistan.  Biden rejected the Trump plan, a plan that was vetted and approved by everyone in the region and would not have abandoned our people and equipment there.

Mr. Biden’s failure to get Americans out of Afghanistan in an orderly and safe manner is unconscionable.  As a result, today’s attack is the deadliest day in Afghanistan in over a decade.  Mr. Biden has recklessly ignored his duty as Commander in Chief and has gravely failed the America people.  For these and other reasons, Mr. Biden must be impeached.  His incompetence, violation of his oath of office to execute our laws faithfully, and his involvement with corruption in the Ukraine, require his removal from office,” concluded Congressman Gosar.

On August 26, 2021, the United States was attacked by a terrorist group called ISIS-K using at least two suicide bombers.   At the time of this writing, 12 U.S. soldiers were killed and another 15 injured.  In addition, another 60 people were killed and 140 wounded.  The Biden administration was warned for over a week of the terrorist threat at the airport but Mr. Biden did nothing to prevent this.   In addition to failing to get U.S. citizens out of Kabul, Mr. Biden has focused on illegally and immorally transporting tens of thousands of Afghans to the U.S.   He has literally put Afghans first over U.S. citizens, and now we have suffered the most one day casualties in over a decade.

Prescott, AZ - Congressman Paul Gosar, D.D.S. (AZ-04) issued the following statement after sending a letter to Secretary of State Antony Blinken in response to reports that the Biden administration dissolved the Contingency and Crisis Response Bureau (CCR), a unit within the Department of State tasked with rapidly evacuating Americans who came into harm’s way while overseas.

“Just as the Taliban was beginning its march across Afghanistan, the Biden administration shockingly canceled a program designed to provide logistics, medical, and airlift support to protect American’s overseas in connection with evacuation efforts.

The CCR was designed to prevent this very catastrophe from occurring. Canceling this program at a time when the Biden administration should have been finalizing well thought out plans to remove our citizens from Afghanistan is, to be perfectly blunt, idiotic. This combined with Mr. Biden’s disastrous troop withdrawal in Afghanistan leaves no question that Mr. Biden is not fit to hold the highest office in the land and should be impeached,” concluded Congressman Gosar.

Click here to read a copy of the letter I sent to Secretary Blinken.