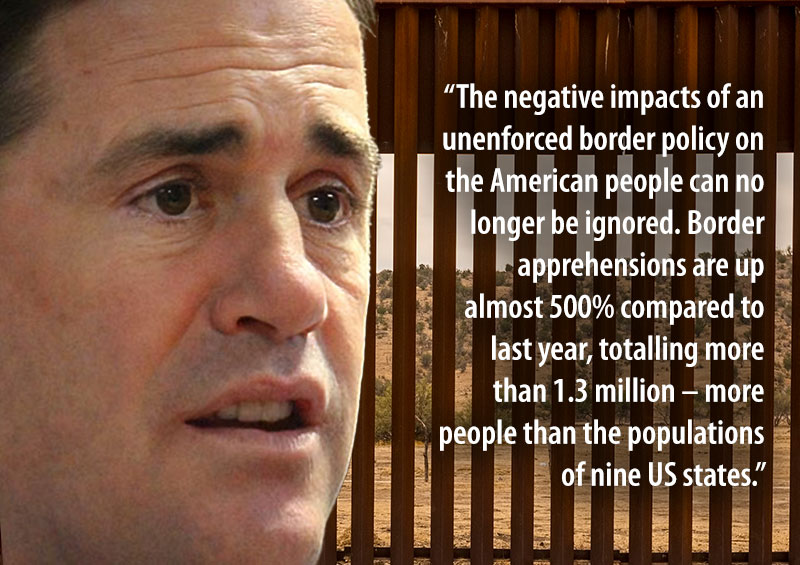 “The negative impacts of an unenforced border policy on the American people can no longer be ignored.”

With border apprehensions up almost 500% compared to last year, Governors are requesting an open and constructive dialog with President Biden within 15 days.

In a letter released today, the governors say they are “seeking an open and constructive dialogue regarding border enforcement on behalf of U.S. citizens in our states and all those hoping to become U.S. citizens. We must end the current crisis and return to border operations that respect the laws of our land and the lives of all people, including those in our states looking to the federal government to enforce and protect our nation’s borders.”

I sent a letter with 25 fellow governors requesting an urgent meeting with President Biden to find meaningful solutions to the worst border crisis in more than two decades.

The attempted border crossings pose a serious threat to the health and safety of migrants and Americans, and it can put a tremendous amount of stress on law enforcement and border security officials. A few weeks ago, a mother and her 10-year-old daughter who crossed the border seeking asylum were found dead from heat exposure in the Yuma desert. Additionally, just last week, Yuma Sector Border Patrol agents apprehended a group of 140 migrants attempting to illegally cross the border.

“Border apprehensions are up almost 500% compared to last year, totaling more than 1.3 million — more people than the populations of nine U.S. states,” the letter states. “Approximately 9,700 illegal apprehensions have prior criminal convictions. Cartels and traffickers are making $14 million a day moving people illegally across the border. More fentanyl has been seized this fiscal year than the last three years combined — almost 10,500 pounds of fentanyl when only 2 milligrams prove fatal. This is enough to kill seven times the U.S. population.”

Governor Ducey and other governors have taken action at the state level to address the border crisis, but their abilities are constitutionally limited as implementation of our nation's immigration laws lies in the hands of the President of the United States.

The governors requested to meet President Biden within 15 days.

BACKGROUND
In August, Governor Ducey called for the resignation of Secretary of Homeland Security Alejandro Mayorkas following his explosive leaked comments on the border crisis. Governor Ducey said in response, “This administration has completely lost control of the border … A defeatist is not what we need when it comes to fighting for border security.”

THREAD: The Biden-Harris administration listened to the concerns of AZ, TX and others and kept Title 42 border restrictions in place. They recognized the significant risk to the health of our communities — details I outlined in a letter last month. @GovAbbott 1/ —">https://t.co/hif2fyoKg7


In June, the Arizona Legislature passed and Governor Ducey signed the FY 2022 budget, including $25 million in state funding for the National Guard border mission and $30 million to assist law enforcement with border security operations, in addition to existing funding for the Border Strike Force.

In May, Governor Ducey joined 19 fellow governors to call on President Biden and Vice President Harris to reverse their destructive border policies.

In April, Governor Ducey declared a state of emergency and deployed the Arizona National Guard to the state’s southern border. The Governor also convened the State Emergency Council to immediately fund the mission with $2.5 million as well as $200,000 for county sheriffs. The Governor extended the missionin August.

NEW: We are back underneath the international bridge in Del Rio, TX, this morning, where up to 12,000 migrants are still camped out after crossing into the US illegally. Conditions here are similar to a third world refugee camp. @TxDPS has secured area while BP works. @FoxNews pic.twitter.com/HKFPYuZZMp

.@tedcruz is doing the work of the Biden Administration on the #BidenBorderCrisis. —">https://t.co/ezRH1vQ9bA