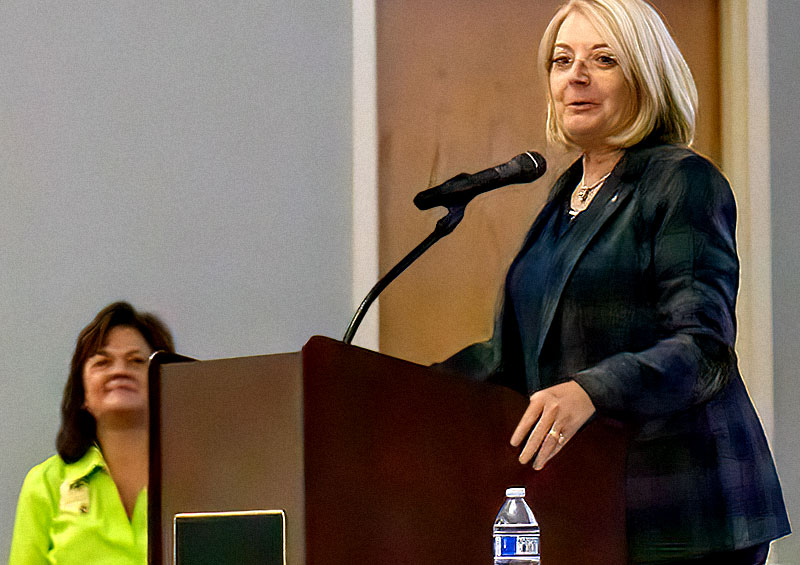 Senate President Karen Fann was surprised at the award

This award was created to honor the most outstanding Yavapai County Republican Committee Precinct Committee member for extraordinary service to the Republican Party – both at the local county and state level - over many years.  This year was the fourth year the award was given.  Previous winners were Malcolm Barrett, Steve Pierce and Ken Bennett.

Upon announcing this year’s winner, Yavapai County Republican Chairwoman Lois Fruhwirth shared “Karen has a long record of public service and has contributed in countless ways to promote Republicans and the Republican Party at local, county, state and national levels.  The Precinct Committee members involved in selecting this year’s winner evaluated all the nominations, came to the same conclusion as to the winner, and it was unanimous.”

“Karen has never wavered from our Republican core values.  She has proven to be a true fighter for Arizonans, standing up to liberal media and leading the Arizona Senate efforts to finding the truth regarding election integrity.  Her efforts to ensure election integrity have elevated her from local and state elected leadership, to national political ‘rock star’ status never before seen in Yavapai County.”

“For more than 20 years, Karen has been a contributing donor to our County Committee.  She counsels candidates and potential candidates wisely.  Her record of consistent and extraordinary service to Yavapai County and the state of Arizona has been outstanding.”

To an audience standing ovation, a surprised Senate President Karen Fann shared “Thank you!  This is an honor that I never thought I would ever achieve.  You guys have always been so amazing.  You have been my support.  You’ve been for there for me with so many encouraging words and prayers.  Thank you so very much.”

Additional Information about the Yavapai County Republican Committee can be found at yavgop.org by calling the Republican Headquarters at (928)776-4500.