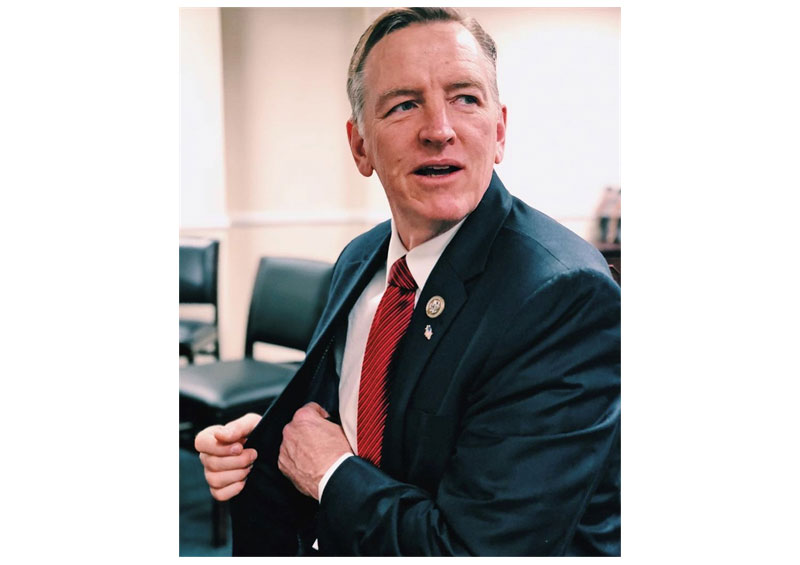 "If I must join Alexander Hamilton, the first person attempted to be censured by the House, so be it."

“Turns out I am the man the Democrats fear the most."

The radical Left, led by Nancy Pelosi, continued its attack on free speech and marched forward with steadfast determination to cancel anyone who disagrees with their Marxist agenda. Their target this week?  Yours truly.  Turns out that I am the man the Democrats fear the most.  Why?  For standing up to the Biden administration’s open border immigration policies and plans to grant amnesty tens of millions of illegal aliens hiding in our country.  More on that later in the newsletter.

On Wednesday, House Democrats voted to censure, or more appropriately, censor me because of a silly cartoon depicting the invasion along the southern border and the Left’s dangerous quest for amnesty for millions of lawbreakers. Everyone who actually watched the cartoon knows that it was not real and that there is no actual threat, or even a perceived threat, to anyone.  House Democrats, always ready to be triggered by the latest fake offense, never bothered to watch the video.  Their minds were made up long before they voted to silence me.

A day before Nancy Pelosi went after me, I went on the Stew Peters Show to explain to the American people exactly why the Democrats are trying to cancel me.

My entire Republican conference was united in support of me and voted against this political stunt.  I am incredibly grateful to Leader McCarthy and everyone who stood up and spoke on my behalf.  After the vote, President Trump phoned me to personally thank me for standing up in support of the America First agenda.

I will continue to speak out against Mr. Biden’s failures while serving my constituents to my fullest ability.  Thank you to the countless number of people, all across the country, who phoned or wrote me to support my efforts to hold this administration accountable.

Click here to read my press release and my remarks on the House floor.

Washington, D.C.—Congressman Paul Gosar, DDS (AZ-04), issued the following statement in response to the Democrats’ attack on his First Amendment right to speak out against illegal immigration and open borders in the upcoming budget bill, known as the Build Back Better Plan.

“President Trump called me his “warrior” for a reason.  I have been fighting for America First and against the Democrats’ efforts to destroy this country with open borders, drugs, illegal immigration and human trafficking all condoned and initiated by the Biden administration.  My team created a short anime video that depicts, in literary form, the plague of open borders and the people who promote and support it.  It is done in a superhero format with good guys and bad guys.   It flies through the air.  It moves fast.  But it does not incite violence.  It does not promote violence.

Even Twitter, the Left’s mouthpiece, did not remove the cartoon noting it was in the public’s interest for it to remain up. The cartoon directly contributes to the understanding and discussion of the battle taking place along the southern border resulting from Mr. Biden’s open border policies.

If this cartoon “incites violence” and needs to be banned and me “punished” for it, then the Cartoon Network, Disney and all of Hollywood must be shut down and “punished” for all the cartoon and film violence they portray.  I don’t advocate this, I am merely pointing out the lunacy of those who think this cartoon is violent and incites violence.  And I remind everyone that pretending to be upset over a cartoon and wanting to suppress the ideas in a cartoon is what happened to the Charlie Hebdo magazine in France.  All right-thinking people condemned that then, and they should condemn the Democrats now for their violation of free speech.

The actual inciters and promoters of violence are Democrats like Maxine Waters who asked an angry mob to run Trump supporters out of town, or Vice President Harris, who helped raise bail money for violent arsonists so they could be sprung from prison only to burn more property.  On May 30, 2020, according to Reuters, 13 Biden campaign staff donated money to bail out criminals so they could return to the streets.  Some of the criminals bailed out by the Democrats included:

“Among those bailed out by the Minnesota Freedom Fund (MFF) is a suspect who shot at police, a woman accused of killing a friend, and a twice convicted sex offender, according to court records reviewed by the FOX 9 Investigators.  According to attempted murder charges, Jaleel Stallings shot at members of a SWAT Team during the riots in May. Police recovered a modified pistol that looks like an AK-47. MFF paid $75,000 in cash to get Stallings out of jail.  Darnika Floyd is charged with second degree murder, for stabbing a friend to death. MFF paid $100,000 cash for her release.   Christopher Boswell, a twice convicted rapist, is currently charged with kidnapping, assault, and sexual assault in two separate cases. MFF paid $350,00 [sic] in cash for his release.”

In response to burning, looting and rioting, one member of Congress tweeted that the riots and protests were good as they “make others uncomfortable.”  That same member told rioters not to stop because “if you are calling for an end to this unrest, and if you are calling for an end to all this [violence], but you are not calling for the end of the conditions that created the unrest, you are a hypocrite.”  Thus, we have members of Congress urging more violence and inciting more violence.  Actual violence.  Over $2 billion in property damage, 100 days of burning and looting and 34 people killed.

Yet they remain on their committees.  They were never censured for actual incitement to violence.

One member of Congress stated that a cartoon can’t hold a gun, but “Congressman Gosar can.”  This reckless incitement to violence will go unaddressed.

Let us not conflate real violence, supported by Democrats, with a mere cartoon that harms nothing but simply lampoons the globalists who push for open borders, amnesty and the destruction of our country, our republic,” concluded Congressman Gosar.

Click here to read a copy of the prepared floor remarks given by Congressman Gosar.

The Censure of Rep. Gosar is an Attack on Free Speech. Remarks by Rep. Gosar, as written.
November 17, 2021

THE CENSURE OF REP. GOSAR IS AN ATTACK ON FREE SPEECH. Remarks by Rep. Gosar, as written.

Madame Speaker, I rise today to address, and reject, the mischaracterized accusations from many in this body that a cartoon from my office is dangerous or threatening.

It was not and I reject that false narrative categorically.

I do not espouse violence towards anyone. I never have.

It was not my purpose to make anyone upset.

I voluntarily took the cartoon down not because it was itself a threat, but because some thought it was.

Out of compassion for those who genuinely felt offense, I self-censored.

Last week, my staff posted a video depicting a policy battle regarding amnesty for tens of millions of illegal aliens.

This was an anime that speaks to young voters who are too often overlooked.

Even Twitter, the Left’s mouthpiece, did not remove the cartoon noting it was in the public’s interest for it to remain.

The cartoon directly contributes to the understanding and discussion of the real-life battle resulting from this administration’s open border policies.

This body is considering passage of Mr. Biden’s reckless, socialist/marxist $4.9 trillion spending bill that provides $100 billion for amnesty to tens of millions of illegal aliens already in our country.

This is what the Left doesn’t want the American people to know.

Our country is suffering from the plague of illegal immigration. I won’t stop pointing this out.

For this cartoon, some in Congress suggest I should be punished.

Millions of illegal aliens, drugs and human traffickers are being let in and moved around our country. In the dead of the night all condoned by this administration.

I have said decisively there is no threat in the cartoon other than the threat immigration poses to our country.

And no threat was intended by my staff, or me.

The American people deserve to have their voices heard in Congress.

No matter how much the Left tries to quiet me, I will continue to speak out against amnesty to illegal aliens, defend the rule of law and advance the America First agenda.

If I must join Alexander Hamilton, the first person attempted to be censured by the House, so be it.

Madame Speaker, I yield back.