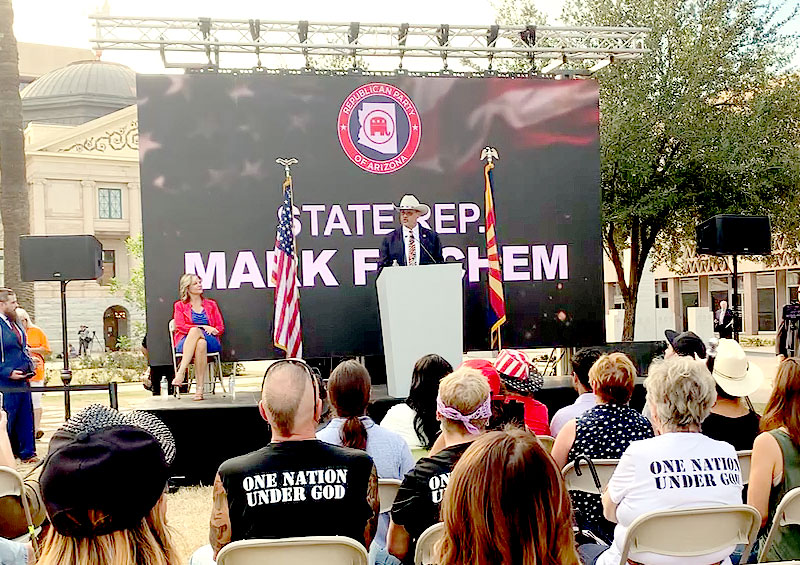 Representative Finchem Introduces HCR 2033, But It’s Unlikely to Get Through

STATE CAPITOL, PHOENIX – State Representative Mark Finchem has introduced HCR 2033, a concurrent resolution calling for the elections of Maricopa, Pima and Yuma Counties to be set aside based on clear and convincing evidence that the elections in those counties were irredeemably compromised.

“The circumstances surrounding these elections undermine voter confidence in the election system, moreover, they ultimately translate into doubts about election integrity.

“The questions first raised over a year ago about the legitimacy of the 2020 General Election persist. Evidence and testimony collected since November 3, 2020, has reached the point of clear and convincing and is now in the hands of the Arizona Attorney General for action. Citations of various elements justifying the Resolution can be found in the body of the Resolution. We have debunked the ‘baseless claims’ narrative promoted by the propaganda pushing media and are now on to the business of providing specific relief to the People.

“While some may say there is no valid constitutional, nor statutory grounds for such an action, they clearly are disregarding longstanding jurisprudence. Article II, Section 1, Clause 2 of the U.S. Constitution provides, in relevant part, ‘Each State shall appoint, in such Manner as the Legislature thereof may direct, a Number of Electors, equal to the whole Number of Senators and Representatives to which the State may be entitled in the Congress.’ U.S. Const. Art. II, § 1, cl. 2 (emphasis added). The Supreme Court has described the constitutional authority of the state legislatures to determine the manner of choosing electors as ‘plenary.’See McPherson v. Blecker, 146 U.S. 1, 35 (1892); see also Bush v. Gore, 531 U.S. 98, 104 (2000).

“The Supreme Court of the United States has even noted that, ‘whatever provisions may be made by statute, or by the state constitution, to choose electors by the people, there is no doubt of the right of the legislature to resume the power at any time.’McPherson, 146 U.S. at 35 (emphasis added, quoting with approval Sen. R., 1st Sess. 43rd Cong. No. 395); see also Bush v. Gore, 531 U.S. at 104 (‘The State, of course, after granting the franchise in the special context of Article II, can take back the power to appoint electors’).

“That there is no process under current law for the Arizona Legislature to ‘decertify’ an election, does not mean that the Legislature cannot provide a remedy for outcome-determinative fraud and illegality in the conduct of the election, exercising powers it has directly from Article II of the federal Constitution, for as the Supreme Court stated in McPherson, ‘there is no doubt of the right of the legislature to resume the power [to appoint electors] at any time, for it can neither be taken away nor abdicated.’

“In the case of Maricopa, Pima and Yuma Counties, the fact that there is evidence showing illegal acts occurred, whether by intent or omission does not matter, the margin of error exceeds the margin of victory. If we are a nation governed by the ‘rule of law,’ as we so often espouse, then violations of the law must have consequences. In that regard, the 2020 General Election is irredeemably compromised, and it is impossible to name a clear winner of the contest.”

Mark Finchem is a Republican member of the Arizona House of Representatives serving Legislative District 11, which includes portions of Pima and Pinal Counties. Follow him on Twitter at @RealMarkFinchem.

Speaker of the House Rusty Bowers pulls out all the stops

For example, recently, State Representative John Fillmore (R-Apache Junction) introduced one of the most sweeping election integrity bills. Fillmore’s bill, HB 2596 would ban most absentee ballots, require various unique markings on ballots to ensure authenticity and would confine voting to relatives small-sized precincts. Require valid state-issued identification; limit voting to occur on Election Day only; require voting to be cast in person by the voter and their precinct (not a vote center), and require that ballots shall be counted by hand and canvassed and the results made public within 24 hours after the polls are closed.

Speaker Bowers responded by assigning the bill for consideration to every committee in the House. Yes, that includes the Education Committee. And the Maps Committee. Even the transportation committee.

Rachel Alexander, writing for the Arizona Sun Times, explains it this way in a February 6, 2022 article, "State Rep. John Fillmore (R-Apache Junction) introduced one of the most sweeping election integrity bills this session, but it appears all but doomed due to a rare procedural maneuver deliberately made to stop it by House Speaker Rusty Bowers (R-Mesa). Bowers scheduled all 12 House committees to hear HB 2596, basically guaranteeing it will never reach the floor since some of the committees won’t bother to hear it.”

On December 4th, 2020, Speaker Bowers issued a press release which was republished by the Sonoran Alliance, stating, "No election is perfect, and if there were evidence of illegal votes or an improper count, then Arizona law provides a process to contest the election: a lawsuit under state law.  But the law does not authorize the Legislature to reverse the results of an election…

"I and my fellow legislators swore an oath to support the U.S. Constitution and the constitution and laws of the state of Arizona.  It would violate that oath, the basic principles of republican government, and the rule of law if we attempted to nullify the people’s vote based on unsupported theories of fraud.  Under the laws that we wrote and voted upon, Arizona voters choose who wins, and our system requires that their choice be respected."

Even though he made that statement more than a year ago, Bowers does not appear to have changed his mind.

The Tucson.com website reports, “...Bowers said he’s not willing to go along with ‘capricious’ alterations to the law sought by 'people of that ilk, the screaming, demanding, arrogant, self-righteous bunch.’ And the speaker said it is his job to stand up and say 'no,' even when others cannot — or will not."

When asked about Finchem’s bill, Bowers is reported to have responded succinctly:

"'Mr. Finchem’s obviously unconstitutional and profoundly unwise proposal will receive all of the consideration it deserves," Bowers, R-Mesa, said in a statement issued late Monday.’"