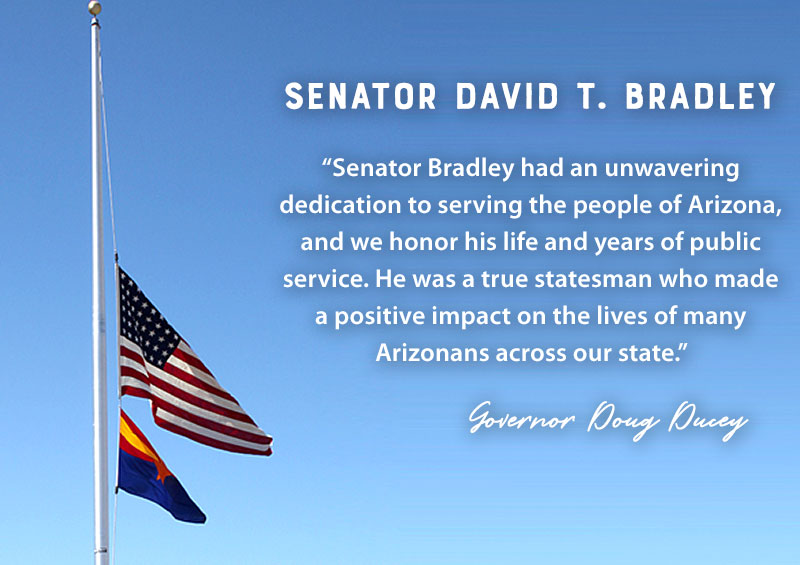 PHOENIX — Governor Doug Ducey ordered flags at all state buildings be lowered to half-staff from sunrise to sunset tomorrow, February 20, 2022, in honor of former Senator David Bradley, a long-time public servant who passed away today.

“Arizona is saddened by the passing of Senator David Bradley,” Governor Ducey said. “My deepest condolences go out to his wife Debbie, and his family and loved ones. Senator Bradley had an unwavering dedication to serving the people of Arizona, and we honor his life and years of public service. He was a true statesman who made a positive impact on the lives of many Arizonans across our state.”

Senator Bradley gave 25 years to public service, serving in the Navy, as a social worker for the state, and in the Arizona Legislature, where he served for 16 years. While in the Senate, he served as Minority Leader for two years, during which he worked across the aisle to advance important priorities. He was a licensed professional counselor and played an integral role in youth development.

“David worked tirelessly to make Arizona a better place, whether through elected office, as a counselor for youth or his work for nonprofits. He cared deeply about doing what is best for Arizonans, and I have the utmost respect for him.”

“During his time in the Senate, he lived as an example that working across the aisle, for a common good, benefits all Arizonans. Whether by expanding educational opportunities for foster kids, addressing the opioid epidemic, or passing the Drought Contingency Plan, he made a lasting impact on our state."