Brnovich: Arizona Elections Have Severe Vulnerabilities that Must Be Addressed Featured 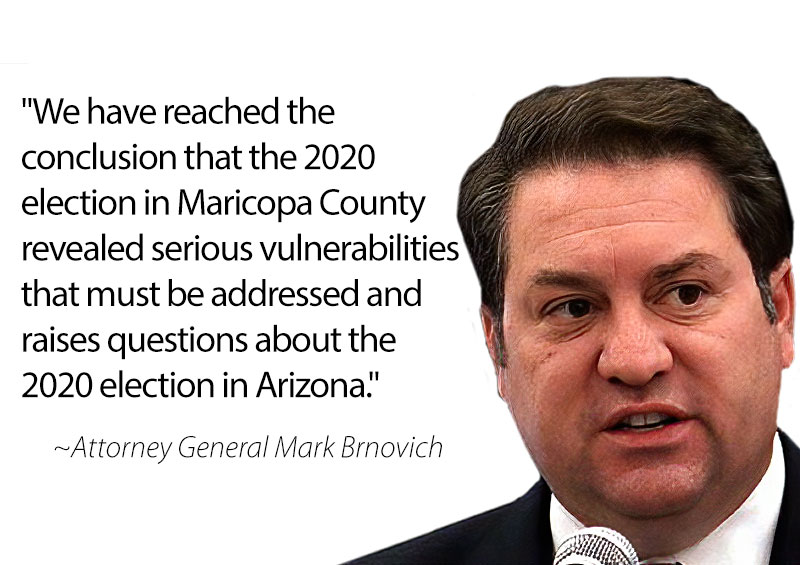 The report isn’t complete, but several areas of concern in Arizona’s 2020 election have come to the forefront.

Six months ago, AZ Attorney General Brnovich's office received reports from the State Senate concerning the Maricopa County Forensic Election Audit. This report was turned over to the Election Integrity Unit (EIU), along with additional complaints alleging election failures and potential misconduct in 2020.

The EIU investigators and attorneys have collectively spent thousands of hours reviewing the Senate’s audit reports and the other complaints. They have conducted interviews and analyzed Maricopa County’s election system and processes.

“I am very concerned by any potential vulnerabilities in our state's election systems, including those that the audit and other complaints have alleged...”

He explains that the EIU's review is ongoing, and therefore, this interim report is limited on what can be disclosed.

So, why is the EIU’s review limited and ongoing?

Well, it’s the same problem that the Senate had. Despite the fact that Maricopa County officials have no Cyber Ninja straw horse to beat in this investigation, they continued to ignore, delay, refuse and litigate against requests for information. (During the Senate investigation, Maricopa County used their distrust of Cyber Ninjas as one of their many excuses for a lack of cooperation.)

“Maricopa County has not always timely and fully responded to our requests for records, necessitating follow-up correspondence or additional requests... Similar to the manner in which it responded to the Senate subpoena, Maricopa County occasionally chose a combative and/or litigious approach to providing requested information rather than assuming posture of transparency. Because we do not have civil subpoena authority, this has necessarily delayed the EIU in investigating all issues.”

The first set of responsive documents took nearly four months after the initial request to fulfill. But, not all of what was requested by the EIU was provided.

In other words, the EIU investigation is still developing in material ways, as they wait for the information to be provided.

In light of this, Brnovich is recommending that laws be changed.

"To address the deficiencies and delays in the manner in which Maricopa County has chosen to cooperate with the EIU, we recommend that the laws be changed to require the immediate production of information when requested by the Arizona Attorney General… Absent... civil subpoena power, the AGO remains limited to submitting public records requests. Such power will help expedite the Office's review, but investigations of this magnitude take substantially longer than the present six months to complete.”

However, the EIU has identified several areas of concern. 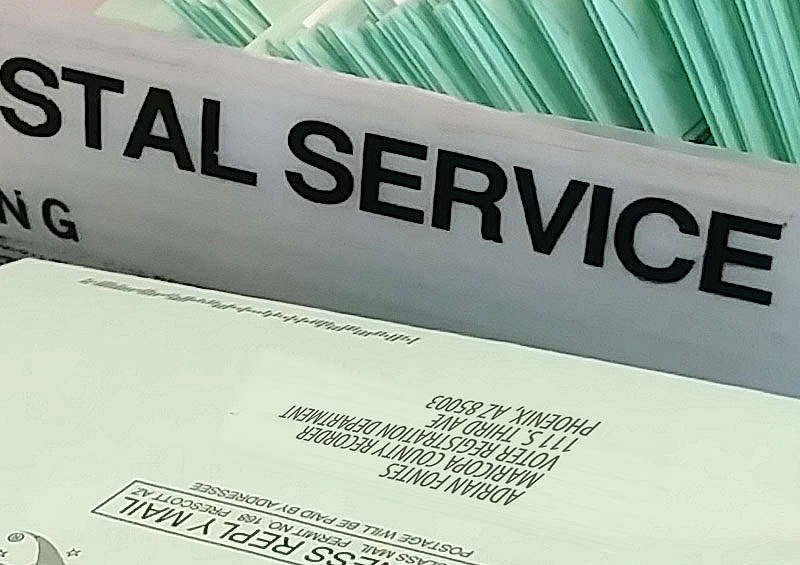 Under Arizona law, an early ballot is not complete and cannot be counted if it does not include a signature on the ballot affidavit. Once the ballot, with its signed affidavit has been received, that signature must be compared with the signature on the applicant’s voter registration record.

Brnovich states that the requirement of matching the ballot signature and the voter signature on file is currently, “…the most important election integrity measure when it comes to early ballots.”

Because there is a tight timeframe for signature verification, the EIU determined that it is often performed “…in an expedited manner by individuals with limited training in signature analysis.”

"For example, on November 4, 2020, the Maricopa County Recorder verified 206,648 early ballot affidavit signatures, which resulted in an average of 4.6 seconds per signature.”

The conclusion? “…the early ballot affidavit signature verification system in Arizona, and particularly when applied to Maricopa County, may be insufficient to guard against abuse."

Another area of concern is the number of early ballots rejected during signature verification for missing and mismatched signatures, which declined sharply over the last three election cycles, despite the increase in early ballot voters.

“One possible explanation for these trends, and the AG acknowledges there could be others,” writes Brnovich, "is that Maricopa County became less diligent with signature review beginning in 2018."

In November 2020, after an election challenge was filed in court, the judge ordered that both sides could retain counsel and forensic experts to review 100 randomly selected early ballot affidavits and conduct a signature comparison of affidavits where the signature match had occurred.

The plaintiffs’ expert testified that of the 100 ballots reviewed, 6 signatures were “inconclusive” - meaning she could not testify that the signatures actually matched the voter registration card.

The forensic expert for the defendants, who wanted to defeat the election challenge, testified that of the 100 envelopes examined, 11 were inconclusive.

That means the signature verification matches in 2020 were potentially between 6-11% inaccurate.

As the Brnovich report states, this information, “…suggests that improvement is needed.”

Brnovich recommends legislative remedies, pointing out that the verification standard set forth in statute is insufficient, and there must be opportunities for parties’ election observers to meaningfully observe the signature verification process in real time, and to be allowed to raise objections.

When one votes with an early ballot, they don’t have to mail it in. They can drop the ballot off at an Early Ballot Drop Box. 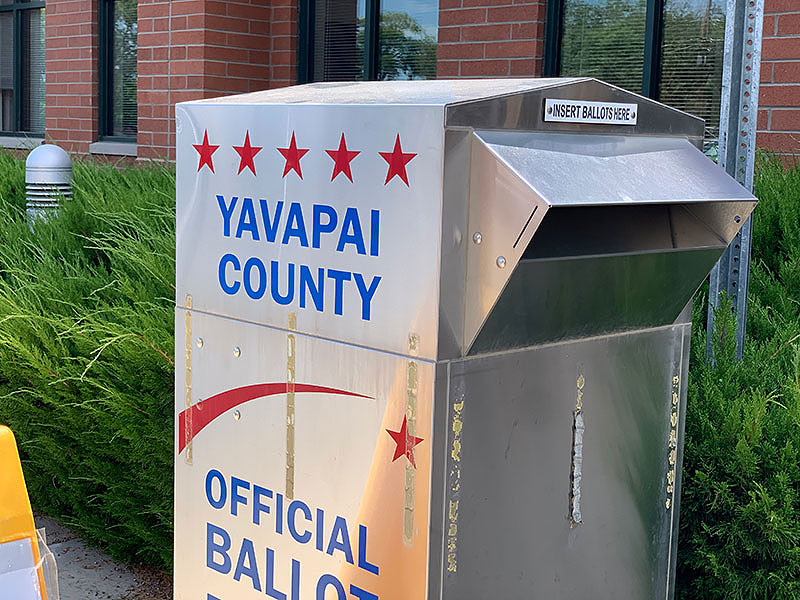 By law, for the 2020 election, the procedures governing the transport of ballots from a ballot drop box included:

Multiple violations of ballot transportation procedures were uncovered. Out of 1,895 Early Voting Ballot Transportation Statement, 381 forms (20%) were missing the required information, including:

According to Brnovich, “It is possible that somewhere between 100,000 and 200,000 ballots were transported without a proper chain of custody.”

Brnovich believes that the ballot custody and transportation procedures needs to be codified, as well as increased transparency in early ballot chain of custody including monitoring.

"Finally, because of the security issues associated with voted early ballots sitting in bins and containers in remote locations, the Legislature should enact laws that either prohibit drop box locations altogether or limit them to early ballot voting centers, polling day locations, or other secure locations staffed and closely monitored by election officials,” Brnovich says.

Use of Private Grant Monies

The purity of our elections necessitates that election officials and others are prevented from influencing the manner in which electors choose to exercise their right to vote.

Almost $8 million dollars of private, nongovernmental grant monies were used by the AZ Secretary of State Katie Hobbs, and Maricopa and Pima Counties during the 2020 elections.

"To secure the purity of our elections, our laws prevent election officials and others from influencing the manner in which electors choose to exercise their right to vote. During the 2020 elections almost $8 million dollars of private, nongovernmental grant monies were used by Arizona Secretary of State Katie Hobbs, Maricopa County, and Pima County for various election purposes as outlined in a report prepared by the Arizona Auditor General dated March 30, 2022. Available at https://www.azauditor.gov/sites/default/files/22-301_Report.pdf . We are carefully reviewing this report to determine any election laws were violated through the use of these funds. Although our review is ongoing, our initial findings raise serious concerns regarding the legality of certain expenditures."

Brnovich offers other suggestions for election laws in this report, such as increasing the penalties for election crimes and protections for whistleblowers. He also reviews the current measures the Attorney General’s office is taking to defend Arizona’s Election Integrity Laws.