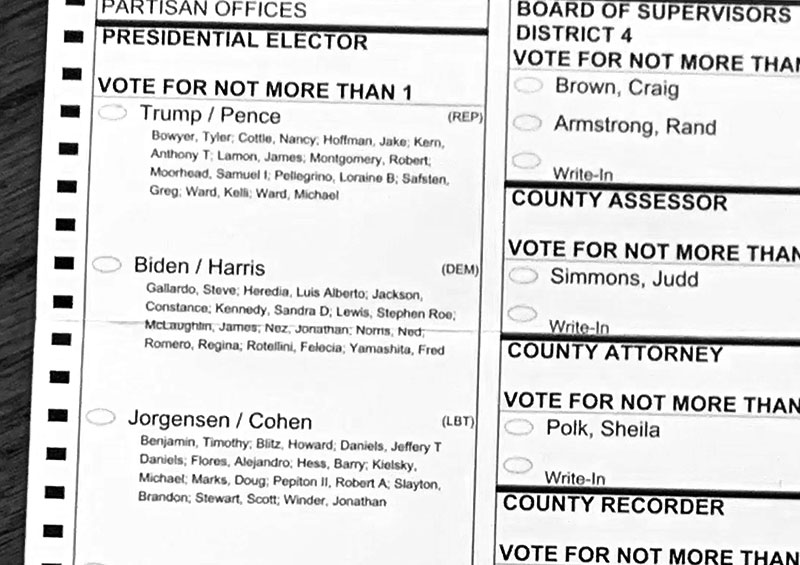 Thank you to Senate President Karen Fann and House Speaker Russell Bowers – and all, for what you are doing in Arizona. A fast check of signatures will easily give us the state. Votes against have been reduced to a very small number! https://t.co/NIGpkJHyoY pic.twitter.com/gJIozjtyES

Thank you, Arizona Senate President Karen Fann and Arizona Speaker of the House Rusty Bowers, for calling for this independent audit. —">https://t.co/58nw7bWEMs

Maricopa County Supervisors are Clint Hickman, Jack Sellers, Steve Chucri, Bill Gates and Steve Gallardo. Except for Gallardo, they are all Republicans.

Senate Government Chair Michelle Ugenti-Rita posted that she spoke with Supervisor Steve Chucri, who indicated that he supports the independent audit, and he is encouraging the other board members to support a full audit as well.

“A significant number of voters believe that fraud occurred and with the number of irregularities it is easy to understand why,” said House Majority Leader Peterson.

Indeed, many questions have been raised about the Arizona election, from a wide variety of sources. With the razor-thin margin of just 10,457 votes separating Joe Biden from President Trump, it would not take that many irregularities to flip the results.

According to Sidney Powell’s federal lawsuit, filed December 2, 2020, alleging widespread fraud in Arizona, there are likely more than 400,000 fraudulent votes. 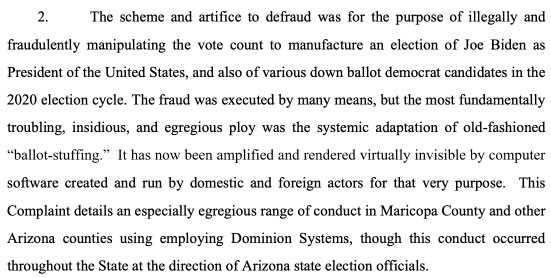 Powell claims there are:

94,975 ballots returned but not recorded

100,724 historically unprecedented levels of turnout in specific counties or precincts

8,000-35,000 - Several sources claim to have found that ballots were cast in the name of people who were dead.

1.3+ - That’s the weight Shiva Ayyadurai believes Biden votes were given over votes cast for Trump, according to his testimony at the Arizona Hearings.

2,000,000 - Ballots with signatures improperly verified and authenticated, according to Congressman Andy Biggs.

In Arizona, the data shows that the total number of illegal ballots counted and legal ballots not counted likely exceeds 300,000 votes — far more than the number of votes separating the presidential candidates.

A court case brought by Dr. Kelli Ward, Director of the Arizona Republican Party was rejected, despite a few altered ballots, stating, “The court finds no fraud, no misconduct, and no effect on the outcome of the election,” Maricopa County Superior Court Judge Randall Warner ruled. “Plaintiff has not proven that the Biden/Harris ticket did not receive the highest number of votes.”

The Arizona Republican Party indicated they will challenge the ruling to the Arizona Supreme Court.

In the meantime, the Amistad Project of the Thomas More Society has filed suit against Maricopa County on Wednesday night, stating that the County took money from a private organization, which goes against state law.

This violates Arizona law, which does not allow election funding from sources other than taxation or federal grants.

The Amistad Project also is asking some pertinent questions nationally about the chain of custody. They say that there needs to be a "2 person - 1 key” policy for picking up ballots from drop boxes, and that each drop box should be monitored by video camera surveillance. The press conference below provides important information, although it is on a national perspective. (Watch the video below starting at 19:56)

What Do the Voting Numbers Show?

In going back 5 presidential elections to 2024, there is a steady increase in newly registered voters and in ballots cast.

With newly registered voters, the expectation is that the ballots cast will increase, although it’s not likely the increase will be as high as the number of new people registered. People will register and then choose for whatever reason not to vote. But in 2020? There were 66,000 more voters than there were newly registered voters. That’s significantly higher than it’s been since 2004.

Does this prove anything? No. However, it does not discredit any of the other claims listed above.

Also, in going back 5 presidential elections to 2004, the county voting percentage has generally risen, although not necessarily in the expected counties or as high as one might theorize about. That being said, overall , the state voting percentage increase in the 2020 General Election is between 2.8% and 5.7%.That’s a large increase. 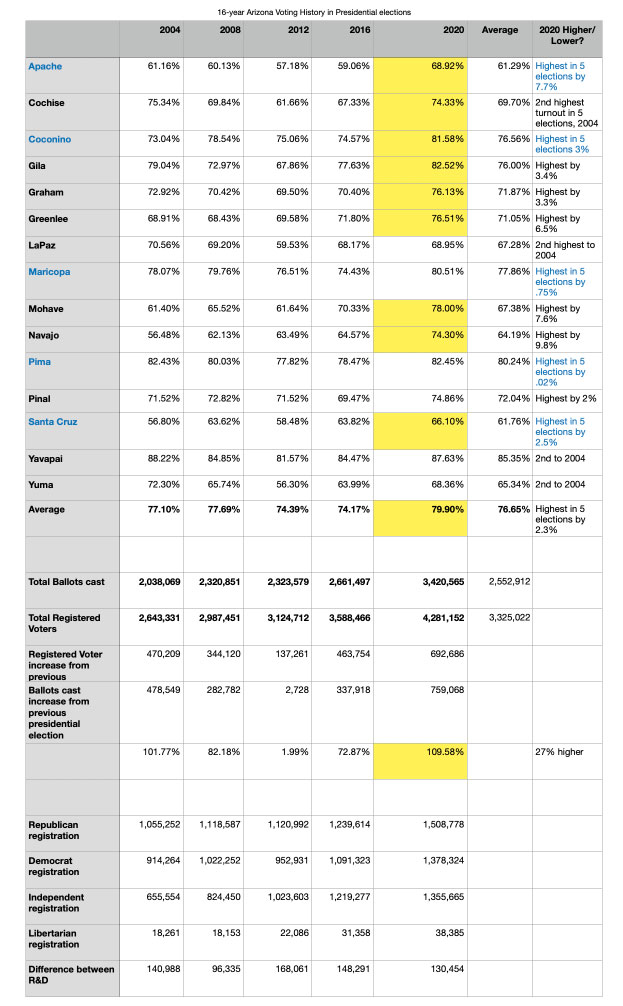