Representative Nguyen honors those who served in Vietnam

STATE CAPITOL, PHOENIX – A legislative proclamation sponsored by State Representative Quang Nguyen (R-1) was read today on the floor of the Arizona House of Representatives honoring veterans and victims of the Vietnam War:

Whereas, the Vietnam War is the main conflict between North and South Vietnam, fought from 1955 to 1975, and involved the North Vietnamese Army and the Viet Cong guerrilla forces in armed conflict with the Armed Forces of the United States, allies, and the Army of the Republic of Vietnam; and

Whereas, nearly three million U.S. soldiers served in-country between 1961 and 1973, serving side-by-side with the Army of the Republic of Vietnam, fighting for freedom against communist North Vietnam and the Viet Cong, who were supported by the communist nations of the Soviet Union and China; and

Whereas, the cost of human life was high, with more than 58,000 American servicemembers, over 250,000 South Vietnamese soldiers, as many as two million civilians on both sides, and more than one million North Vietnamese and Viet Cong fighters who lost their lives during the course of the conflict; and

Whereas, the cost of lives, and mounting opposition to the war, prompted President Richard Nixon and Congress to order the withdrawal of all American combat and support units in 1973 with the stipulation that the U.S. would return if the communist forces reinvaded South Vietnam; and

Whereas, the North Vietnamese and Viet Cong reinvaded South Vietnam in the Spring of 1975, ultimately capturing the capital, Saigon, placing its people under communist control; and

Whereas, further American intervention was blocked by the 93rd and 94th United States Congresses; and

Whereas, according to the United Nations High Commission for Refugees, between 200,000 and 400,000 boat people died at sea, and approximately one million South Vietnamese were forced into re-education camps, including 300,000 South Vietnamese soldiers; and

Whereas, the members of the Armed Forces who served bravely and faithfully in defense of South Vietnam from communism often did not receive proper treatment upon their return and in years following their service;

Therefore, I, Representative Quang Nguyen, Republican, Legislative District 1, invite all of the members of the Arizona House of Representatives to join me today, March 29, 2021, National Vietnam War Veterans Day, in honoring the service and sacrifices of a generation of veterans who served in South Vietnam and throughout Southeast Asia during the Vietnam War; and to express the appreciation that veterans of the Vietnam War and their families so well deserve; and to remember the millions of victims who suffered the war’s devastating consequences, and the communist oppression and tyranny that followed.

A copy of the official proclamation is below. 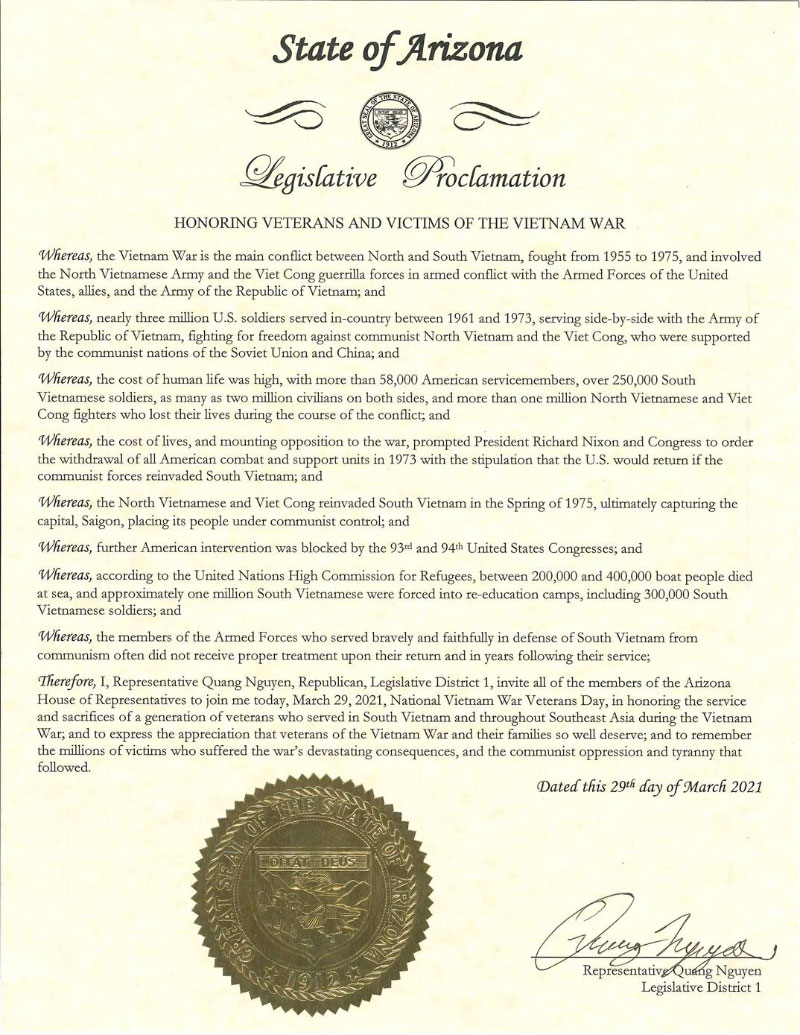 Quang Nguyen is a Republican member of the Arizona House of Representatives serving Legislative District 1, which includes Prescott, and portions of Yavapai and Maricopa Counties.