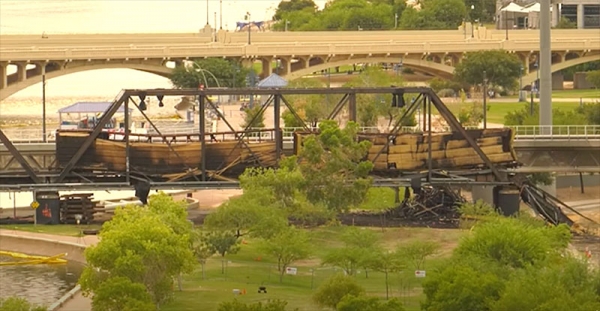 Tempe Fire Medical Rescue and Tempe Police are working with Union Pacific as it seeks to remove a 150-foot section of the damaged bridge that previously spanned Rio Salado Parkway prior to the Wednesday morning derailment and fire. The full bridge does not need to be removed and rebuilding efforts will take place on the southern portion.

The operation involved small precision charges placed in designated and precut locations around the base of a small portion of the bridge, so that the damaged section fell in a controlled manner between the south bank of the lake and Rio Salado Parkway onto a grassy area. There is expected to be a single loud noise similar to a large aerial firework, but with no light flash.

Nearby residents were advised to leave their residences during the demolition as a cautionary measure.

On Wednesday, July 29, at 6 AM, a cargo train derailed and one of the cars caught fire on the railroad bridge that spans the Tempe Town Lake. Thankfully, no one was injured during the incident.

History about the bridge

This historic bridge was built in 1912 and began operations in 1915. The track is owned and operated by Union Pacific.

In late June, Tempe Fire Medical Rescue responded to a minor derailment at the same location which resulted in a small fire and some debris on Rio Salado Parkway. Repairs for that derailment were made by Union Pacific.

The City of Tempe does not manage or inspect the train track and cannot provide updates at this time on the cause of the derailment or prior inspections.

On July 31, Tempe Mayor Corey Woods declared a local emergency regarding this incident.

The fire and derailment caused all boating classes and activities to be closed until further notice. Tempe Beach Park is also closed and pedestrian traffic is restricted in the area.

This part of the cleanup effort is a coordinated effort with input and evaluation from ADEQ, EPA, APS, SRP, Southwest Gas, ADOT, Valley Metro and other partners to ensure the operation is completed safely with minimal interruption to surrounding services. According to the Arizona Department of Environmenatal Quality, air quality is good and there is no risk to the public from the derailment.

At a Saturday media briefing, Clint Schelbitzki, Union Pacific General Director of Public Affairs, thanked residents for their patience.  “We know this is disruptive,” he said. “We’re working…as quickly as we can, as safely as we can, to get through this with our partners, with the community, and we appreciate the patience of the community as we proceed with the reconstruction of this bridge and opening up this area.”

Two of the train cars that derailed Wednesday morning near Rio Salado Parkway contained cyclohexanone, a flammable industrial chemical used to make nylon and paint remover. The cars have since been up-righted and removed from the immediate bridge area.

The lumber car that had been in the middle of the bridge over Tempe Town Lake has been safely removed to the north side of the lake.

In total, nine of the 12 derailed cars had been removed from the area as of Saturday afternoon.

Two workers exposed to chemical are back to work

Two workers contracted by Union Pacific were splashed Friday with a hazardous liquid chemical during the cleanup effort, but both are back at work today.

ADEQ continues to provide emergency response support to the City of Tempe to address any environmental concerns associated with this incident. ADEQ is the lead regulatory agency in charge of protecting public health and the environment.

ADEQ is overseeing Union Pacific as they conduct a thorough environmental investigation and requiring the company to assess the potential impacts of this incident. The investigation will be used to determine any necessary remediation work to be conducted by Union Pacific.

In addition, ADEQ and the Environmental Protection Agency (EPA) are monitoring air quality in the incident response area this weekend. For questions about ADEQ’s response, call 602-540-8072.

Information about the derailment and the bridge’s history is available at tempe.gov/RailroadBridge.

The Union Pacific emergency claims line is 1-877-877-2567, option 1, for any affected residents who feel they incurred costs as a result of the Sunday demolition.