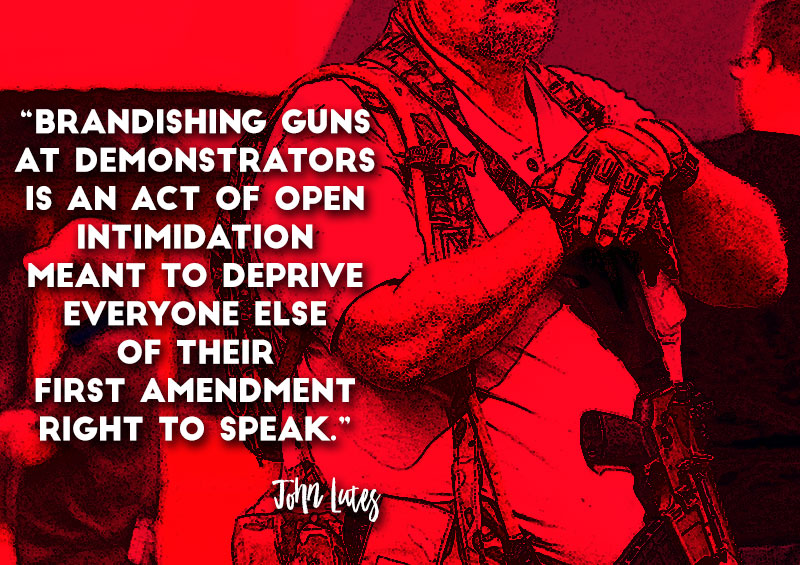 Displaying weapons while screaming profanities in public does not keep our town safe.

I was disturbed to see images of angry men in camouflage wielding assault-style weapons on the courthouse square, harassing a student-led demonstration in support of Black Lives Matter. We promote ourselves as “everybody’s hometown,” and we should behave like it. The videos from the recent demonstration and counter-demonstration speak for themselves. It hurts downtown businesses to have open displays of aggression on the square. Prescott needs to be better than this.

Everyone has the right to peacefully gather and assemble, and Prescott’s courthouse square has been the site of many peaceful demonstrations. From homages to those killed at the Tree of Life synagogue to Gulf War protests, cultural festivals and Republican rallies, the square is a sacred space for diverse expression of civic life, and we need to keep it safe for everybody to use in “everybody’s hometown.”

The people responsible for maintaining the safety of our public spaces are our local peace officers. The Prescott Police Department and the Yavapai County Sheriff’s Office effectively managed the situation and prevented physical harm or violence from happening. We should applaud that. It particularly concerns me that some groups clearly have so little faith in our local law enforcement that they feel compelled to show up with their own weapons for a demonstration. It is up to our local law-enforcement professionals to determine whether they need backup, and that would only come from other professionals. Here we had self-appointed paramilitaries, also known as vigilantes, many from out of town, with high-powered weaponry simultaneously claiming to defend our town and aggressively asserting their own political agenda against people they disagree with. The virtue of law enforcement is that they are accountable to the law and are sworn to protect all citizens, regardless of political affiliation or agenda.

As a former holder of a federal firearms license selling rifles on Whiskey Row, I know that responsible gun ownership is the key to preserving the freedoms guaranteed by the Second Amendment. Brandishing guns at demonstrators is an act of open intimidation meant to deprive everyone else of their First Amendment right to speak. It may not be technically illegal, but it is tremendously irresponsible and we should recognize it as such. Threatening behavior opens the door to tragedy.

Whoever organized the armed counter-demonstration on September 4 did not consider the impact it could have on Prescott’s image and tourism-dependent economy, on the long-term vitality of civic practice at the courthouse square, or on people’s lives if something went wrong. They also disrespected our law-enforcement professionals by not trusting them to manage the situation. Displaying weapons while screaming profanities in public does not keep our town safe. I expect better of those exercising their constitutional rights.

I ask all responsible gun owners to consider how high emotions can lead to tragic results, and exercise sensible self-restraint in exercising the rights we all cherish.