The Journal of Prevarication: Some Call it Pork Featured 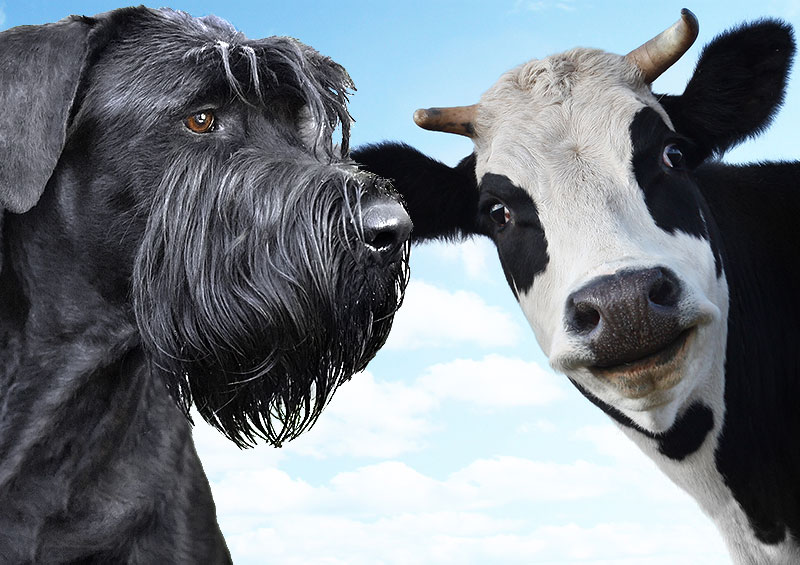 What to do with a miniature cow…

Miniature cows are great for sliders!

Fibber, our miniature schnauzer, doesn’t watch much TV. But he’s fascinated by the new Jack in the Box commercial that shows tiny cowboys herding cows about a foot tall.

As the snappy jingle says, they’re “herding cows the size of schnauzers, but they’re cattle.”

After Fibber watched the commercial the second time, he turned to me and said, “I don’t believe that for a minute.”

I said, “Hey, have faith. People don’t believe that I have a talking schnauzer, either.”

If you haven’t seen this commercial, you can catch it at

The idea is that it takes tiny cattle to make mini sirloin burgers.  Burger King beat Jack in the Box to the idea of mini burgers, so Jack had to come up with something.

What is significant is that the little cattle used in the commercial are raised in Arizona. They are called Hualacopa cattle because they live in the tiny Hualacopa Valley, west of Wikieup.

The TV exposure promises to bring new prosperity to a valley that has been in recession since 1728. That’s when full-sized cattle escaped from a Spanish mission near Yuma, and drifted up to Hualacopa.

The annual average precipitation in the valley is minus-two inches. There’s not much there for a cow to eat, except rocks. Over the decades, cattle shrunk like raisins in the sun.

The only water is a mirage of California’s Salton Sea, which  often projects itself onto the valley. A cow can walk clear across the mirage and not get her feet wet.

Rancher W.D. Forty, who inherited the herd from his grandfather, has been hauling water to the little cows most of his life.  That chore got easier after scientists at the University of Arizona developed freeze-dried water, an improvement on the dehydrated water they had invented in the 1950s.

Still, Forty could not give the Hualacopa cows away.  They didn’t have enough meat on them to satisfy a buzzard, and they were too messy for pets.

Then the congressman who represented the Hualacopa Valley talked W.D. Forty into applying for a federal research grant to develop the breed.  He helped Forty get an appropriation for four and a half million dollars.

Some of the grant went to fatten up Hualacopa cattle with steroids and fat hay shipped in from Nebraska. But most of the money went into a shrewd marketing campaign, aiming to lure filmmakers.

A rival rancher heard about the subsidy and said, “That’s pork.”

W.D. Forty smiled and said to his accountant, “No, that’s bull.”

That’s what Fibber said, too.

Editor's Note: This column was originally published on May 13, 2009 at the Journal of Prevarication blog. We have republished it with the gracious consent of Jim's widow, Ellie Hartz-Cook.