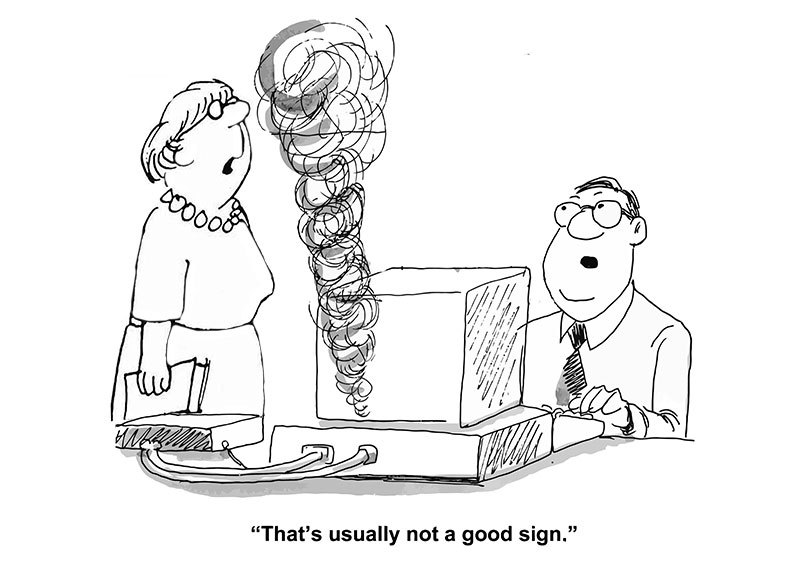 Technology is great until it isn’t.

We’re still crunching numbers around here. The little digits are all over the tile floors at the Wickenburg Institute For Factual Diversity. We have swept and vaccuumed, but we still hear them crunching when we walk.

I brought it on myself when I asked 24 billion bits of information to replicate themselves onto zip discs.

That stirred up all the bits, bytes and pixels–made all those ones and zeroes restless. When they got the chance–again, my fault–they ran amok. Stampeded.

I love computers, and I hate computers. I’ve been using them for 25 years, and I have owned a PC for 17 years. I won’t bore you with all the ways I have found to be incompetent with a computer. You have troubles of your own.

My current computer is getting cranky. The Windows 98 error messages are personal: “You want to do WHAT?” and, “Just who do you think you are?”

The other day my screen disappeared and a messageappeared in stark white on a blue background: “A fatal exception has occurred at 000000 035SUV. At least you’re consistent.”

I need to keep this computer running for a while because I’m starting on my next book, The Arthur Andersen Cooking The Books Cookbook.

While I have used less than half of a 6.4 gigabyte hard drive, I thought it might help if I cleaned off some of the clutter. But I wanted to preserve that precious clutter, in case the computer decides to crash.

I bought an external zip drive. The rest of the world has been storing things on CDs for years, and now they’re building computers with built-in DVD writers, and I’m just getting around to zip disks.

As usual, I had trouble figuring out how to use the drive.

It came with a minimal booklet telling how to install the software and plug in the USB cable. Its online manual told me everything except what I wanted to know.

I called Iomega and told a techie, “This is cute, the dancing disks on the screen, but I need to know how to copy my files to a disk.” In fewer than 100 words, he told me all I needed to know.

My big mistake was overlooking this one line in the manual: “Always shut down your computer before disconnecting the zip drive.”

After I copied all my files, I casually unplugged the cable while the computer was still running. Katie, bar the door!

Little numbers started pouring out of the USB port. My screen went blue and the white letters said, “A FATAL ERROR HAS OCCURED AT YOUR USB PORT. YOU’D BETTER START BAILING. NOW!”

As you know, we’re in the middle of a critical drought. While forest fires ravage Colorado, Arizona is bracing for dust fires. Cattle walk around like jerky on the hoof. I think the computer’s little rubber USB washers dried out.

Digits were pouring out–tiny ones and zeroes. They’re so small you’d think they wouldn’t be a problem, but you do the math: 6.4 gigabytes is more than six billion bytes, and it takes eight bits to make up a byte.

Fifty billion digits, give or take a few. Those from the unused portion of the hard drive are transparent, and hard to see. But the bits that have been used are opaque on one side, translucent on the other, and brittle.

Pretty soon, there was a big mound of bits on the floor. They hung in the air like dust, and formed a film of digits on everything in the house.

I couldn’t shut down the computer from the screen, so I hit the power switch behind, knowing Windows would chew me out for doing it that way.

I rushed to the garage for the shop vac. Miss Ellie opened the sliding door to the patio, and grabbed a shovel. After she dug our dog Willie out from under the pile, she started shoveling numbers out to the door.

It took all of the following day to make our house functional again. We still need to mop the floor, but I hate to use the water during this drought.

I went to CompUSA and bought a Compaq Hard Drive Refill Kit. Nowadays, the smallest hard drive seems to be 20 gigabytes, so I have about a hundred billion digits left over.

If any of you have a data spill and need some numbers, let us know.

Editor's Note: This column was originally published on June 16, 2002 at the Journal of Prevarication blog. We have republished it with the gracious consent of Jim's widow, Ellie Hartz-Cook.
Rate this item
(0 votes)
Last modified on Sunday, 20 December 2020 17:40
Published in Conversations
Tags
« Rest In Peace, Lauren An Upside Down World »