Journal of Prevarication: The Elephant - errr, Elk - in the Living Room Featured 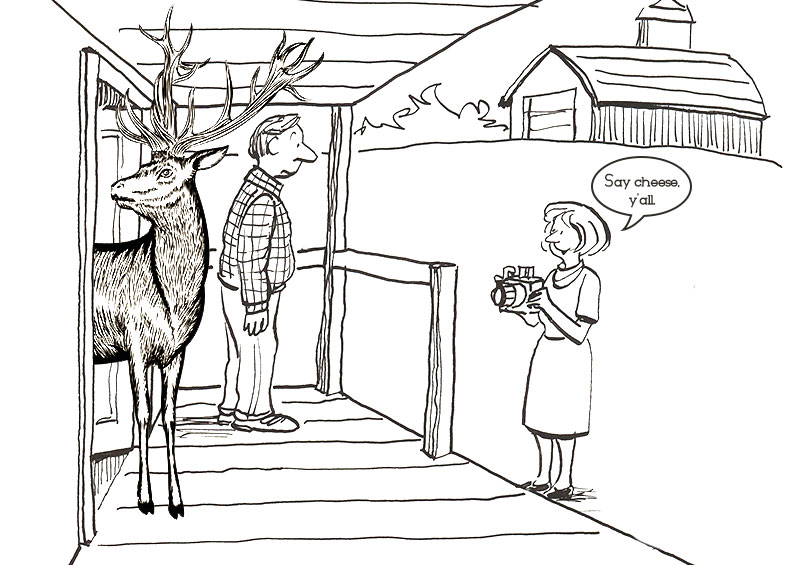 Antlers in the Attic

Editor's note: This article was originally published on June 3, 2002

If you don’t talk about the problem, it will go away. Yeah, maybe.

In the jargon of emotional guidance, “the elephant in the living room” is a metaphor for the obvious problem that no one talks about: drugs, alcohol, rotten table manners.

People think that if you don’t talk about the problem, it will go away. An elephant in the living room is not so distressing as a bison in the bedroom, except that an elephant is usually bigger than a bison.

Now we have to report elk, plural, in the den of a home near Flagstaff. Also in the bedrooms, kitchen, dining room and the loft.

The human family that owns the house was not so dysfunctional until the elk moved in. Now those people are emotionally frail.

All over the West, animals are invading human habitat, for two reasons: a drought which has left animals desperate for food and water, and the fact that humans have been invading the wildlife’s habitat, confusing the critters.

When I was a kid in northern Arizona, wild animals pretty much kept to themselves, and we did the same. It was a treat to come across an elk, a bear, a mountain lion. The coyote also was a shy critter, but not so bashful as the rare Mogollon blue marmalute.

At lower elevations, the homely wild pig called the javelina was so elusive as to lure hunters far into the brush. The javelina caused hunters to lie about his ferocity, since there were few who could attest to his actual bashfulness.

Nowadays, elk are so numerous in the mountains of the north that they are sometimes destructive pests. (The same could be said of people.) The elk tear up farmers’ crops and fences, and dash across highways in front of motorists, which is hazardous to both elk and motorist.

Here in Wickenburg, the coyote, the mule deer and the javelina come into our yards, joining rabbits, quail and the occasional rattlesnake.

The invasion is exaggerated this year by drought. Wickenburg has had no rain at all in 2002, and all of Arizona has been short of rain for several years. The last two summers, bears were coming into Phoenix residential areas, looking for food and water.

It was so hot and dry last week that roadrunners were plodding slowly across the highway. We keep our birdbath filled because we know how critically God’s creatures need water. The birds that visit us are getting larger and more aggressive.

One man said he saw a bobcat in his brother’s yard, looking for food and water. A cattle rancher who was slow to haul water to his livestock said he returned to his house and found that several cows had moved in with him and were drinking from the bathtub.

Little wonder, then, that an extended family of elk staged a home invasion at the development called Porcupine Shores, south of Flagstaff.

The homeowners, Bob and Beth Scratchmore, had gone to Phoenix on a shopping trip with their daughter Lily and their son Jason. When they returned home, they noticed the lights were on.

Bob called the Coconino County Sheriff’s Office on his cell phone. Two deputies soon showed up to check out the house.

As they opened the door, a bull elk ambled out onto the porch and walked off into the forest. A cow elk was lying on the floor in the den, chewing on houseplants and watching the 5 o’clock news.

The deputies helped chase the elk away, then discussed how to write up a report that wouldn’t get them laughed out of the sheriff’s office. One deputy, Dan Lockjaw, phoned The Wickenburg Institute For Factual Diversity and told me, “You ain’t gonna believe this.” The Scratchmores had a hard time getting to sleep that night. Finally, about midnight, they all drifted off and the house was quiet.

Beth awakened about 1:30 a.m. and felt someone nuzzling her neck. She grumped, “Bob, knock it off! I’m exhausted.” Then she heard Bob snoring gently. She turned on a lamp and saw a bull elk staring at her in a friendly manner. She screamed and grabbed the phone.

Dispatchers at the sheriff’s office had a hard time making sense of what Beth was saying. They sent six fresh deputies, two game rangers, a state livestock inspector, four paradmedics, a county dogcatcher and the Scratchmores’ State Farm agent.

As Beth fled toward the front door, she had to fight her way through a herd of elk. Officers rescued the rest of the Scratchmores, and shooed the elk outside.

One bull, however, was in the downstairs bathroom, drinking from the toilet. He almost filled the small room, and he refused to leave.

Unwisely, perhaps, one of the officers prodded the elk in a sensitive region of his body. As the elk jerked his head up, his antlers penetrated the ceiling and emerged in the upstairs bedroom of Lily, barely missing a deputy who was looking under the bed to make sure there were no more elk there.

A wise game ranger saw that Jason Scratchmore played cornet, and he had an idea. He took the horn outside and tried to emulate the bugling sound of one bull elk challenging another during rutting season.

The big elk quickly freed himself by kicking out one wall of the bathroom, then another. He left the scene, looking for battle, with part of the ceiling stuck to his antlers.

The Scratchmore home is for sale, as is, crime scene tape included. The family is living in a motel while Bob and Beth look for employment somewhere in the Midwest.

Bob keeps telling his crisis counselor, “An elephant would have been a whole lot easier.”

This has happened in other places, too!

Here is a link to the Arizona Elk Society: https://new1.arizonaelksociety.org