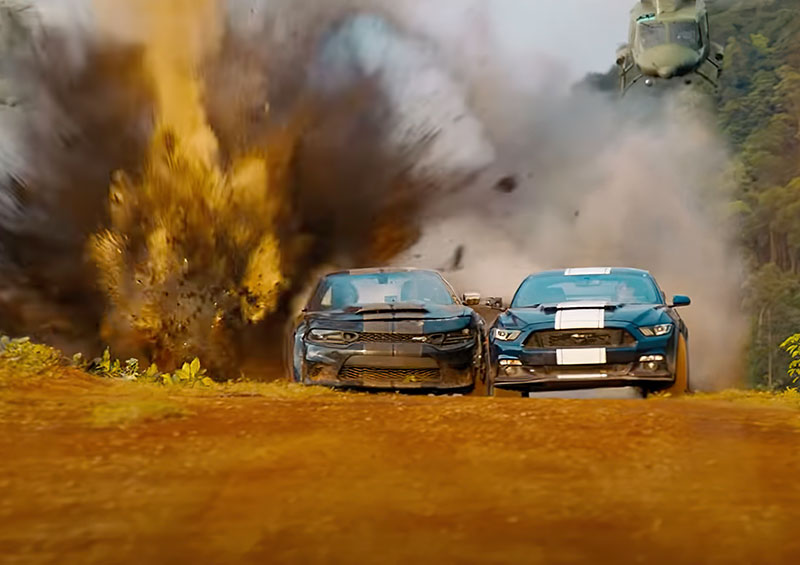 If this movie has anything, it has action.

Wow, nine of these things now, hard to believe but true. The films are loud, silly, colorful, and move so quickly that we stare at the big screen in abject amazement that such goings-on can make it into a film. And people eat it up. The franchise has generated over six billion dollars at the box office. We need no more of an explanation for “F9” than that. Hollywood, in this case, gives the people exactly what they want. The people in their turn give Hollywood billions of dollars. Perfecto.

Taiwan-born director Justin Lin made five of the previous films. He knows exactly what to show that will please us the very best.

One thing that pleases us is the wide cast of familiar actors playing familiar characters. We have Vin Diesel, Michelle Rodrigez, Tyrese Gibson Jordana Brewster, and rapper Ludacris all coming back as part of the Toretto family and friends. Wrestler John Cena has a prominent role. Charlize Theron returns as a villain. Helen Mirren, Nathalie Emmanuel, and Kurt Russel both return in smaller roles. Michael Rooker turns in a brief but competent dramatic role. It makes quite a list of big-name actors for one movie.

Sung Kang plays a character named Han who died in a previous film, but movie magic brings him right back. Barely an inconvenience.

Fans will enjoy one of the longest and most crash-filled scenes ever put on film.

I judge films sometimes by how I feel at the end. Am I a happier person, or perhaps wiser or even more thoughtful and caring? Me and my movie chums just stood around laughing when the film ended. I have not had a movie give me the hic-ups since “Some Like it Hot,” but this one did. It is so enthusiastic, frivolous, and fun that we couldn't help ourselves. And it is not like we made fun of the discontented plot or impossibilities in the script. The makers didn't care about authenticity, not a bit, so we didn't either. We just watched and enjoyed the spectacular ride. Just because a scene is silly or unrealistic doesn't mean that we can't enjoy it.

We enjoyed this extravaganza and I think you will too. Let your brain out to graze for a couple of hours, relax and savor the noise and bright colors.

“F9: The Fast Sage” runs longer than any of the other “Fast and Furious” movies at two hours and twenty-five minutes. This four explosion film wears a mild PG-13 rating.

Fans will want to know that the tenth edition of this popular series will come at us next year. The eleventh and last (we will see about that) in the series will film at the same time as number ten. We will get at least two more films.

According to Forbes magazine, star Vin Diesel has a net worth of two hundred and twenty-five million dollars. We who buy tickets like him.