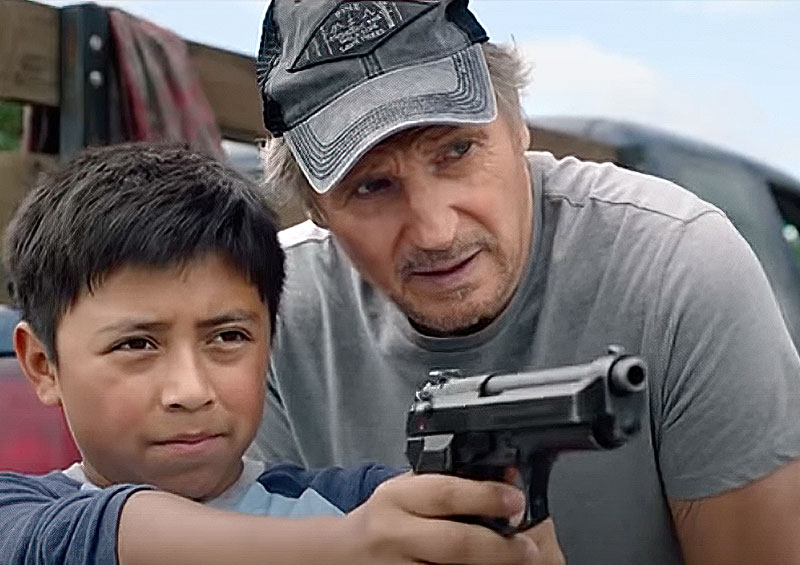 The Marksman does not surprise or disappoint.

We have become accustomed to seeing Liam Neeson in violent shoot 'um ups so “The Marksman” will not surprise or disappoint us. Neeson plays a believable hard man, even at his age. The Irish actor turns seventy this year, so the wise movie makers do not have him physically beating up bad guys. He outthinks and outshoots them. Neeson's movies of late have had a mixed reception with audiences. His three “Taken” films have grossed close to a billion dollars but others of his recent movies have struggled to make a profit.

Here he plays a widowed Arizona rancher along the border. He becomes involved with a small boy who is targeted by the narco-traficanties. What follows is a lower level of the usual Neeson style violence.

Fans will be pleased to see Katheryn Winnick. We remember her best as Lagertha, a shieldmaiden and queen in the long-running and very good TV series “Vikings.” She plays a border agent, the daughter of Neeson's now-departed wife. It is pleasant to see her.

“The Marksman” nearly makes it as a thriller. It also nearly makes it as a charming film about the old man and the boy with each teaching the other one or another major life lessons. It nearly makes it as a film about men with blood on their hands seeking redemption and finding it. Nearly is the word we need to focus on. Maybe the writers and director tried to put too much into the same film and ended up with not enough of any particular thing to satisfy us in the seats.

We end with a predictable film with few surprises and a couple of major clunks. I will mention one clunk and let the viewers discover the other. In a totally superfluous scene, the penniless, indebted old man and the penniless orphan boy burn a huge cache of cartel money. Nobody but nobody would do that.

I mentioned the long association that director Lorenz has with Clint Eastwood. We can see echos of “Gran Torino” and “The Mule” in this decidedly less interesting movie.

“The Marksman” runs just short of two hours and earns a mild PG-13 rating for lots of shooting, some swearing, and misuse of booze. This average thriller gets a sub-par two and a half sawblades.

Not so fun fact-The setting for “The Marksman” is Arizona but the shooting locations are in New Mexico.

Rate this item
(0 votes)
Last modified on Sunday, 24 January 2021 21:32
Published in PaysonAZ.news, Conversations
Tweet
Movie Review: Heart of the Gun »
back to top