Flags at Half-Staff in Honor of Judge Rosa Mroz Featured 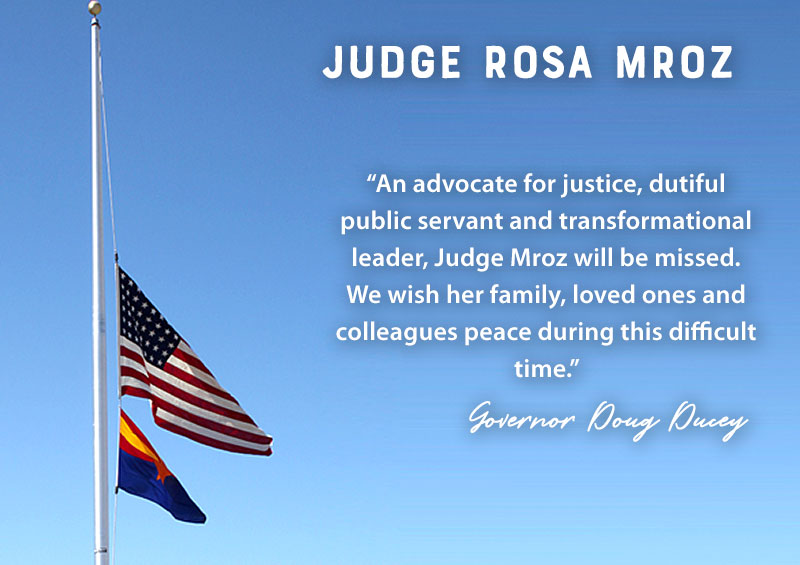 PHOENIX — Governor Doug Ducey ordered flags at all state buildings be lowered to half-staff Monday, February 7, 2022, in honor of Maricopa County Superior Court Judge Rosa Mroz, who passed away today after succumbing to injuries in a traffic collision.

Judge Mroz was struck by a vehicle in Phoenix while crossing an intersection on Feb. 2. She passed away today after several days in a Valley hospital.

“Arizona is saddened to hear of the tragic passing of Judge Rosa Mroz,” said Governor Ducey. “An advocate for justice, dutiful public servant and transformational leader, Judge Mroz will be missed. We wish her family, loved ones and colleagues peace during this difficult time.”

Judge Mroz had served on the Maricopa County Superior Court since 2004 and was appointed by Governor Janet Napolitano. Prior to her appointment, she served in the Arizona Attorney General’s Office and the Maricopa County Attorney’s Office, and worked as an associate in Arizona law firms. Mroz clerked for Arizona Court of Appeals Chief Judge Thomas Kleinschmidt and Arizona Supreme Court Justice James Duke Cameron.

Judge Mroz was a beloved member of Arizona’s legal community, serving not just as a judge, but a friend and mentor to many.