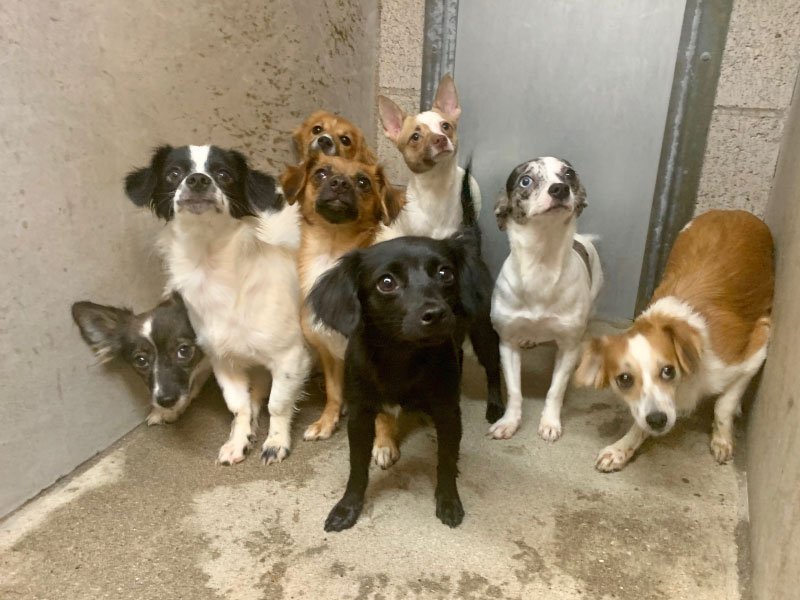 Upon returning to the residence to follow up the original investigation, Animal Control Officers came with a search warrant.

On July 1, 2021 our Animal Control Officers conducted follow up to the original investigation and requested the assistance of our Investigation’s Section in order to apply for a search warrant based on new information regarding animal cruelty in the 700 block of Prescott Heights Drive.  Detectives found probable cause to obtain a search warrant and at about 2 pm they served a search warrant on the residence.

The owner of the home was present when officers arrived and was cooperative with the search of the home.  During the initial investigation we did not have a search warrant or consent to enter the home and were not aware of the current condition of the home.  Detectives found the home to be packed with debris, plywood floors covered in animal excrement and dogs in cages who were not in good physical health.

With the assistance of the Yavapai County Humane Society, Prescott Valley Police Department, Yavapai County Sheriff’s Office and the Chino Valley Police Department there were an additional seventy-two (72) dogs and one (1) Potbellied pig that were removed from the home.  The ages of the dogs ranged from 10 days old to around 17 years of age.  There was one dog found in severe distress and was provided immediate medical attention but was later euthanized.  A second dog was found to have a severe leg injury and unfortunately the leg had to be amputated.

While officers were at the home the daughter of the home owner arrived and entered the driveway at a high rate of speed in her vehicle endangering the officers on scene.  She was identified as 47 year old Joanna Riggle.  She was taken into custody and booked into the Yavapai County Jail on charges of felony Endangerment as well as Animal Cruelty.  Charges against the home owner are pending at this time for animal cruelty.

A total of 158 animals were removed from the home since June 2021 and due to the health and structural concerns of the building, City of Prescott Code Enforcement, Building Safety, the Yavapai County Health Department and Adult Protective Services were contacted to assist in the investigation.

On June 4, 2021 at approximately 1030 am, a Prescott Police Department Animal Control Officer responded to a home in the 700 block of Prescott Heights Drive reference complaints of barking dogs and strong odors of feces coming from the property.

The Animal Control Officer was invited into a portion of the home and observed a large amount of small breed dogs in the home.  After having a conversation with the property owners, the owners advised that they were overwhelmed by the amount of dogs they had on the property and they wished to surrender a portion the dogs.

Due to the large quantity of dogs on the property a request was made to the Prescott Valley Police Department Animal Control Unit and they immediately responded to assist as well as employees of the Yavapai Humane Society.

A total of sixty-two (62) small breed dogs were rescued from the property and transported to the Yavapai Humane Society where they will be placed up for adoption.

All of the dogs were found to be healthy at the time of rescue and there no criminal charges pending in the matter.

We would like to thank the Prescott Valley Police Department and the Yavapai Humane Society for their assistance with this incident.
Rate this item
(0 votes)
Last modified on Thursday, 08 July 2021 04:20
Published in Prescott.news
Tweet
Tags
« 2021 Rodeo Parade - Biggest Photo Gallery in Town! About Politics and Copyright Theft »
back to top