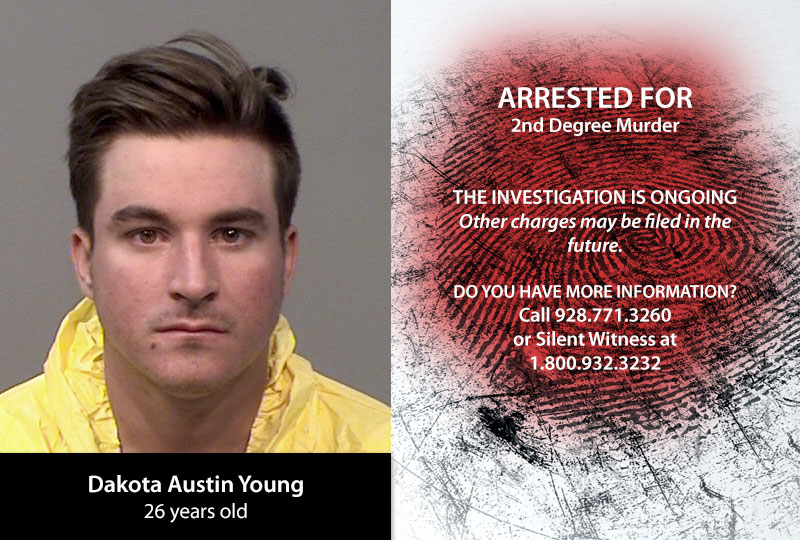 An update on Saturday’s shooting

Through the course of this investigation, Prescott Police Detectives determined that the Victim, 24 year old Adam Lee Emmermann, suffered a single fatal gunshot wound. Investigators have arrested and booked a suspect in this case on second degree murder charges. The suspect is identified as Dakota Austin Young, a 26 year old Prescott resident. At this time the investigation is ongoing and other charges may be filed in the future. There are no other outstanding suspects in this case and Mr. Emmermann’s next of kin has been notified.

On Saturday November 6, 2021 at about 3:15 am the Prescott Police Department responded to an apartment complex in the 300 block of North Rush Street in Prescott regarding a call of shots fired. Officers located several subjects and were directed to an apartment where a young male subject, in his 20’s, was found alive but suffering from a significant injury. Life saving measures were attempted on scene by first responders but the victim died prior to being transported to the hospital.

Several individuals were detained on scene and are being questioned at this time. The Prescott Police Department Investigation’s Section was called out and they are currently conducting an investigation into this incident.

At this time there are no outstanding subjects and there is no threat to the community regarding this investigation.

We will provide an update at a later time. The next of kin of the deceased victim has not been notified at this time and the name will not be released.

Officers and Detectives will be on the scene for the remainder of the day processing the scene.