Not the Preferred Way to Pave the Road... Featured 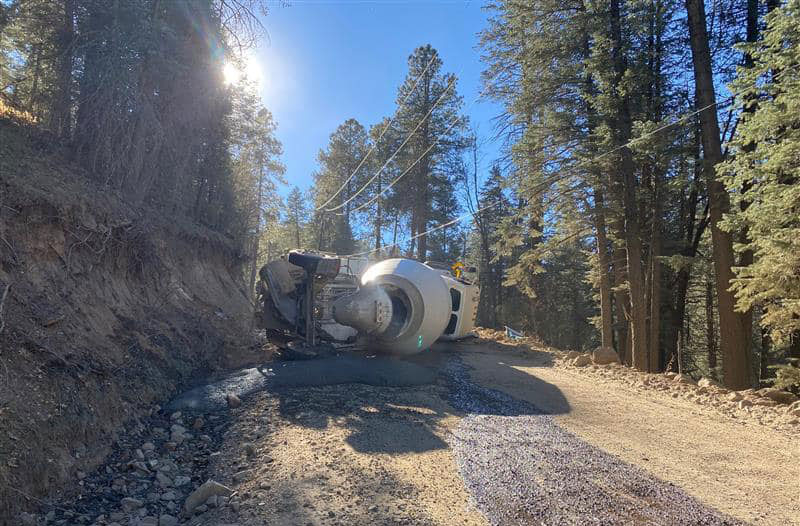 Walker Road can be a bit treacherous for cement trucks.

What happens when a cement truck topples while carrying 45K pounds of wet concrete?

A single vehicle injury accident occurred on Walker Rd at mile marker 9.1 in Prescott earlier this month. A cement truck was traveling southbound on Walker Road when it approached a sharp corner in the road. As the truck slowed down to a sudden stop because of traffic, it began rolling back down the hill and collided with the embankment on the eastside of the road. The sudden stop, coupled with both the momentum and weight of the vehicle, caused the truck to roll onto its passenger side and come to a rest completely blocking the road.

The truck was carrying approximately 10 yards of wet cement and was extremely heavy. During the recover, YCSO deputies were able to determine that the drum with the remaining cement weighed 45,000 pounds (22.5 tons). The driver of the truck was able to get out of the vehicle through the windshield, and according to witnesses at the scene, was very shaken up. A passerby took the driver to YRMC prior to YCSO’s arrival at the location. He sustained only minor injuries.

Representatives of the company that owns the cement truck arrived soon after the accident having already arranged for a tow truck and crew to recover the vehicle. Yavapai County Roads Department, which oversees Walker Road, also responded to assess the situation and assist with cleanup after the cement truck was recovered.

The truck and concrete were cleared from the roadway, but the cement mixer barrel was left on the trailer at the scene because the wrecker crew did not want to back the trailer down approximately 2 miles in the dark. They had it moved the next morning.

The quick action of the cement truck company and County staff prevented what could have been, in the overheard words of one Deputy, “one heck of a speedbump.”