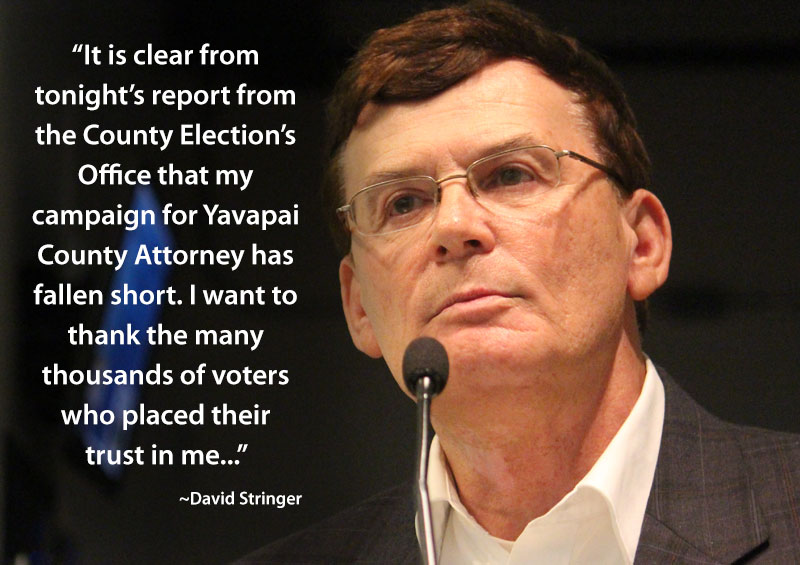 Leaving a message on his Facebook page, David Stringer, Candidate for County Attorney, concedes to Sheila Polk, although he never mentions her name.

It was a bitter campaign. Every commercial Stringer ran, every mailer he sent out, hammered out his message that Polk was anti-Trump, pro-amnesty and against the border wall.  Polk vehemently denied those accusations and answered by pointing out that she was supported by local law enforcement, and the strong agreement between Immigration authorities and Yavapai County. She also spoke of many endorsements and accomplishments she had gathered throughout her career.

As part of Polk's campaign, she pointed to a time that Stringer was arrested on sexual charges in Baltimore. In his defense, Stringer maintained that he was never proven guilty, although he didn’t clarify it was because he accepted a plea deal. Those charges were later expunged from the record by a Maryland court and his license to practice law was never declined. Stringer published quotes from former Attorney General Tom Horne (who is in litigation against Polk) and Federal Judge Steven Logan, both of whom issued strong statements against Polk. Neither Horne or Logan expressly endorsed Stringer.

Stringer also ran ads against Polk pointing to victims that died because of illegal immigrants. However, none of the deaths of the four victims had anything to do with Yavapai County or Polk. The widow of one of the victims posted a public message on Twitter, stating that her husband would never want to be affiliated with David Stringer and she firmly requested, “Just Stop.” According to AZCentral, the family of one of the other victims also asked that Stringer stop this ad. President Trump’s campaign sent a “cease and desist” letter demanding that Stringer stop using Trump’s photo in such a way that implied an endorsement from the President.

This campaign was likely the most expensive ever in Yavapai County for both candidates. The candidates turned in a Campaign Finance Report by July 28; Stringer’s report indicated that he had contributed over $250,000 to his own campaign, and Polk’s report stated she had received $199,585.96 in total contributions and donations throughout the election cycle. By the time that the final financial reports are turned in, the two candidates’ combined amount spent on this campaign will likely be close to half a million dollars.

Tuesday evening, Stringer left a message on his Facebook page conceding that he had lost the election.

"Today’s primary election for county attorney brings to a close the most hard fought, personally vicious, and expensive campaign in the history of Yavapai County. My purpose in running for County Attorney was to bring about reform and change to an office that has been occupied by the same incumbent for 20 years.

"It is clear from tonight’s report from the County Election’s Office that my campaign for Yavapai County Attorney has fallen short. I want to thank the many thousands of voters who placed their trust in me and urged their friends and family to vote for me in the face of the most salacious allegations any candidate has ever faced. I am grateful and humbled by your support and I wish I could thank each one of you personally.

"If nothing else, this election has demonstrated the importance of an office that has been uncontested for many years. Voters have been reminded that the County Attorney plays the central role in our criminal justice system. It is the County Attorney who determines who gets charged with a crime, and very often who goes to jail and for how long. The decisions of the County Attorney’s office drive the costs of our entire county government. Regrettably, with tonight’s election results, those costs are going up in Yavapai County and more low level offenders are going to jail, consuming resources badly needed to target the more violent offenders.

"For me, politics is always about ideas, not personalities. This election will have important consequences for the future. I will have more to say at a later date about the campaign and what the election portends for our country, for my fellow Republicans, and for our state as a whole. For now, I simply say 'Thank You' to those who stood by me and supported me, and I look forward to re-electing President Trump, Congressman Paul Gosar, and our Republican slate this November!”