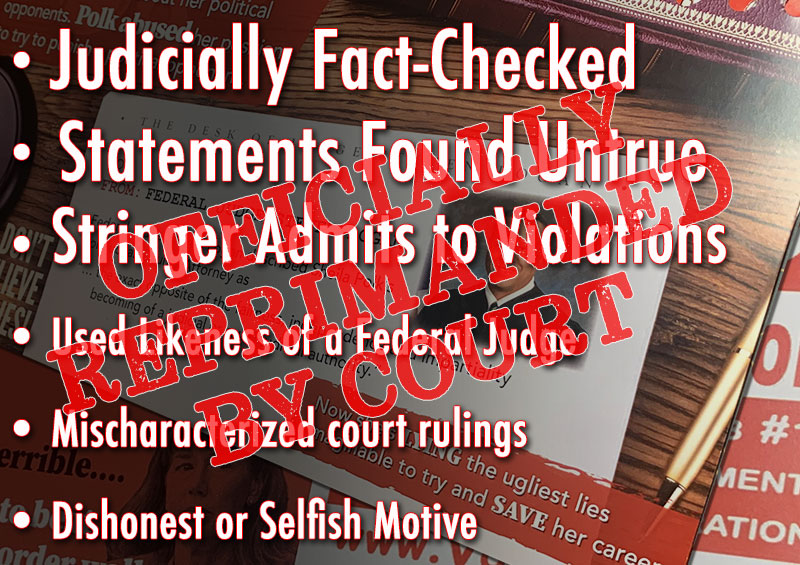 "Respondent’s conduct violated his duty to the profession, and the public.”

Disclaimer: The author of this article was once a partner with David Stringer in the ownership of Prescott eNews. However, all the information provided below came from public documents and campaign materials.

"Respondent knowingly approved campaign materials that were in violation of the Rules of Professional Conduct."

The 2019 election was one of the most expensive campaigns ever run in Yavapai County, as well as, arguably, one of the nastiest. David Stringer, former LD 1 Representative, who resigned in disgrace from the Legislature in 2018, challenged incumbent Sheila Polk for the Yavapai County Attorney position.

Money gets spent in many ways during a campaign. Signs, shirts, buttons are all used to remind people to vote for a candidate. But, in a district like Yavapai County, that is large and filled with many small rural communities, one of the best ways to communicate with voters is through mailers.

Mailers come in all sizes and shapes, but one of the most popular formats is 11 x 6, because you can add a lot of information to it. Polk sent out about seven mailers, Stringer sent out about nine. The majority of Polk’s were about her record, her stand on the issues and the long list of people who endorsed her. Just one of her mailers, and two other quarter-panels were devoted to discussing Stringer’s scandals and record. On each mailer, there was a statement, “Paid for and authorized by Polk for County Attorney”.

Stringer’s mailers were very different. Every single one of them devoted at least half, if not all, the space to attacking Polk. Each one also said, “Paid for by Conservatives for Stringer – Authorized by David Stringer”.

The mailers showed no actual endorsements in favor of Stringer’s candidacy, although they were cleverly designed to look like people were endorsing Stringer. For example, five of them had a photo of Stringer standing next to President Trump. In the image, cut out and replicated against several different backgrounds, Trump is smiling and showing a “thumbs up”. The problem is that neither Trump nor his campaign ever gave him permission to use the photo in such a matter nor did Trump endorse Stringer. Trump’s campaign sent a “cease and desist” to Stringer in response. He also used a quote from former Arizona Attorney General Tom Horne along with his picture.

Stringer was even more audacious than that. In one mailer, he used photos of victims that had been murdered by illegal immigrants - yet their tragedies had nothing to do the Polk or her office. Most of the murders occurred in other states. Just one of the victims, who was a Phoenix Police Officer, was killed in Arizona while he was on duty. When Julie Erfle, the officer's widow, found out that Stringer used her husband as part of his campaign, she issued a statement in the strongest of terms:

“Once again a disgraced politician is using the tragedy of my husband’s death for his own political gain. There is no way my husband would have ever wanted to be affiliated with a racist pedophile like David Stringer. Just stop.”

Political campaigns often make statements and create marketing materials that would be considered shady at best. But, it’s rare that a candidate finds himself under scrutiny from the Bar Association. Stringer managed to achieve that dubious distinction.

However, as was common in Stringer’s mailers, that information was used without Judge Logan’s knowledge or consent.

From the court documents: 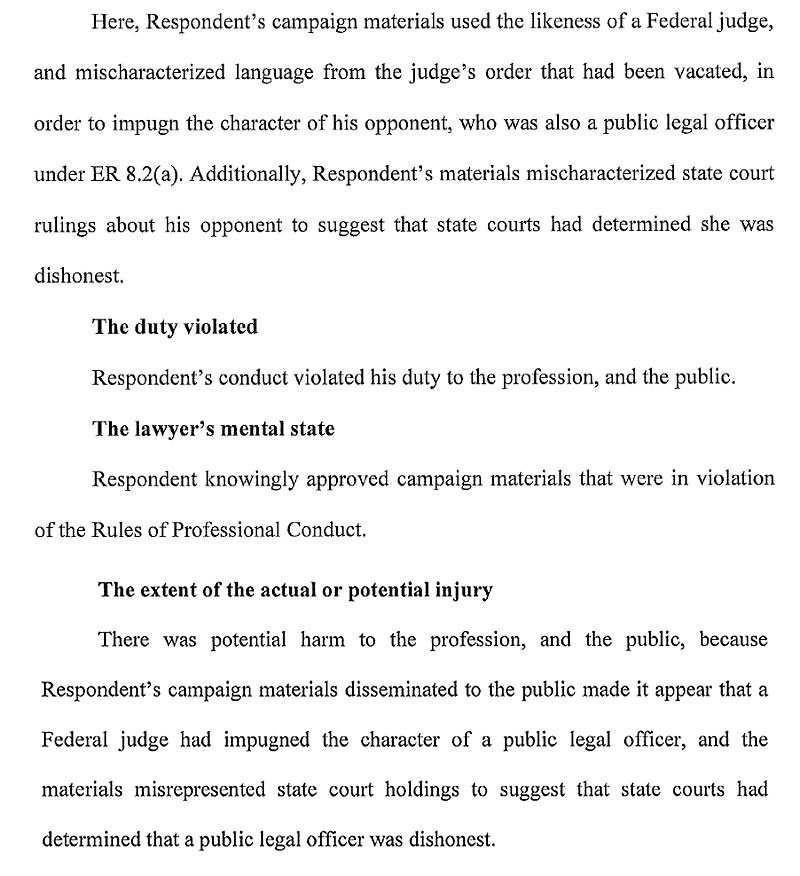 The two parties agreed that the appropriate sanction under the circumstances would be  “Reprimand”. Additionally, Stringer was to be assessed the costs and expenses of $1200. The Arizona State Bar and Stringer’s attorney presented this agreement to the Presiding Disciplinary Judge on December 17th, 2021.

However, it was not yet resolved. The Presiding Disciplinary Judge felt that suspension would be more appropriate under the circumstances. She pointed to the fact that Stringer didn’t negligently engage in this conduct, but that he knowingly approved these campaign materials that were in violation of the Rules of Professional Conduct. Remember, his campaign materials all carried a statement that they were paid for by "Conservatives for Stringer - Authorized by David Stringer."

Judge Downie said that she could not approve the Agreement as written. 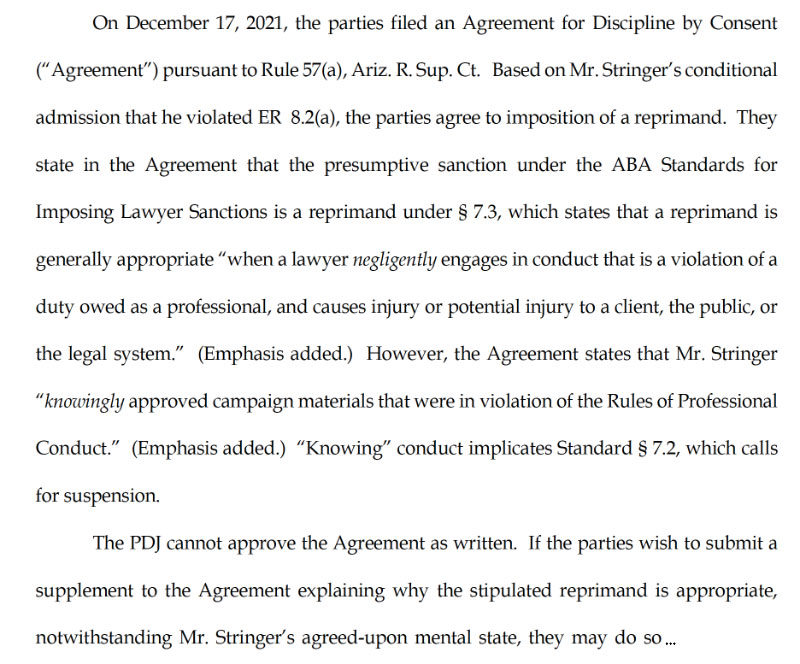 After the new year, the parties submitted a brief justifying “Reprimand” as being an appropriate sanction, pointing out that, “The object of lawyer discipline is not to punish the lawyer but to protect the public, the profession and the administration of justice.”

Judge Downie was persuaded by the brief and agreed to the “Reprimand” sanction, issuing a final judgment and order on January 19, 2022. 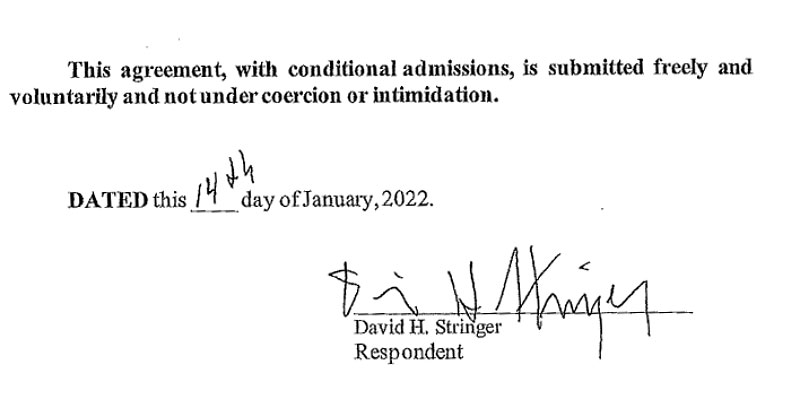 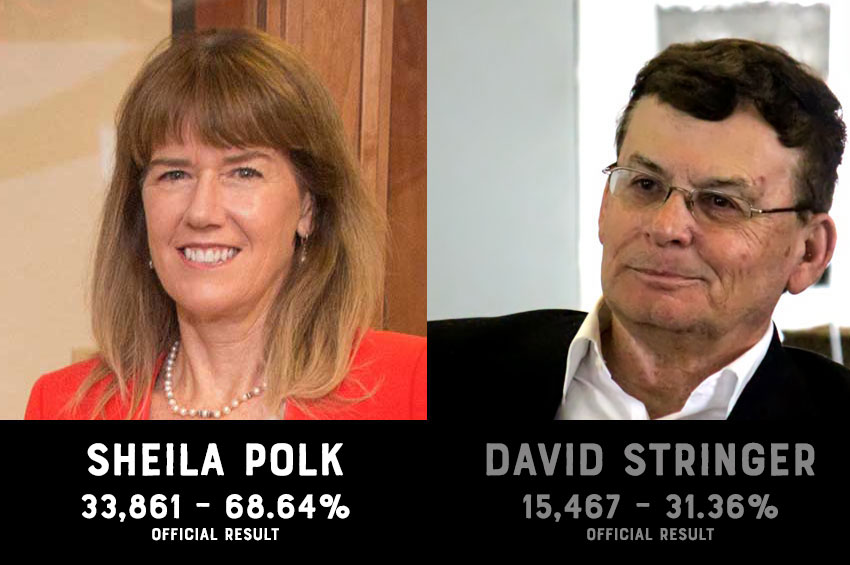 Links to Court Documents and Agreements

Yavapai County Attorney responded to the decision in an email:

The Presiding Disciplinary Judge has issued an official reprimand against attorney David Stringer for some of his unethical conduct during my 2020 reelection campaign for Yavapai County Attorney... Mr. Stringer admits he misused the likeness of a Federal Judge and mischaracterized language from the Judge’s order that had been vacated in order to impugn my character. Mr. Stringer further admits to mischaracterizing state and federal court rulings to incorrectly and inaccurately suggest that courts had determined that I was dishonest in my role as County Attorney.

It is a significant event that the Presiding Disciplinary Judge has disciplined Mr. Stringer with a public reprimand and with a finding that he acted with a dishonest or selfish motive. This is especially egregious in a campaign for such an important office as the county attorney.

The position of county attorney is a constitutional office dealing with public safety that requires the taking of an Oath to the U.S. Constitution and the Constitution and laws of the State of Arizona. The person that serves as County Attorney must be a person of honesty, integrity, and good moral character. While Mr. Stringer’s unethical efforts to defeat me in the campaign were overwhelmingly unsuccessful thanks to the voters, his deliberate mischaracterization of state and federal court rulings to impugn my good character and mislead the voters should not be forgotten. Mr. Stringer’s willingness to commit unethical conduct to win such an important public safety position should be widely and openly condemned. The people of this county deserve better.

Copperstate News reached out to Mr. Stringer to ask if he wanted to make a statement. As of this writing, he has not responded.