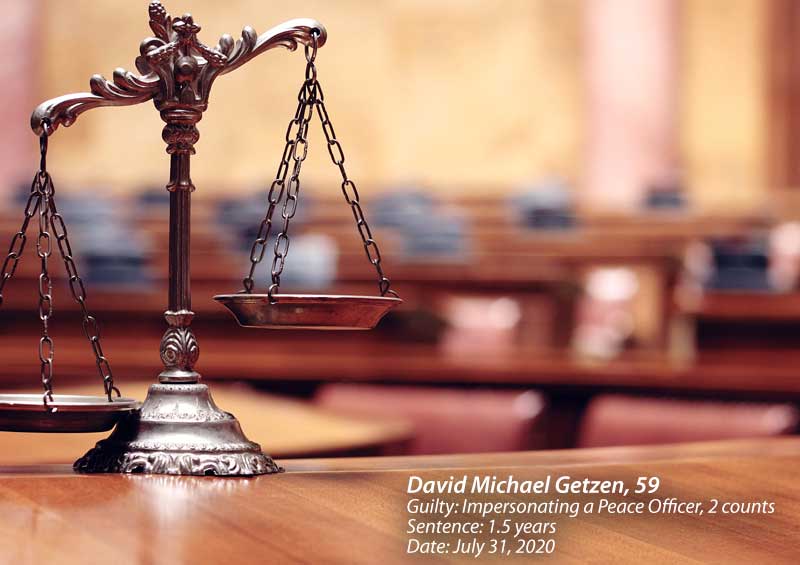 David Michael Getzen, 59, of Cottonwood, was sentenced on July 31, 2020, to a total of 1.5 years in the Arizona state prison after pleading guilty to two counts of Impersonating a Peace Officer, both class six felonies.

The events occurred on October 4, 2019, when Getzen called the Yavapai County jail claiming to be an FBI Agent. In the call, Getzen said the detention facility needed to “surrender” two sheriff’s deputies. Getzen also threatened to “shoot the place up” and shoot Judges Michael Bluff and Tina Ainley, both Yavapai County Superior Court judges, as well as Yavapai County Attorney Sheila Polk and Sheriff Scott Mascher, if the jail did not release the individuals. He also said he would show up the next day with his buddies to “take care of it.” In another call, Getzen provided his “FBI number,” and claimed he had a warrant for the arrest of a deputy county sheriff.

Detectives with the Yavapai County Sheriff’s Office were able to quickly identify David Getzen as the caller. The next day, Getzen was located in downtown Prescott near Fair Street and Gail Gardner Way and taken into custody without incident. The case was handled by the Coconino County Attorney’s Office because the victims are all Yavapai County elected officials.