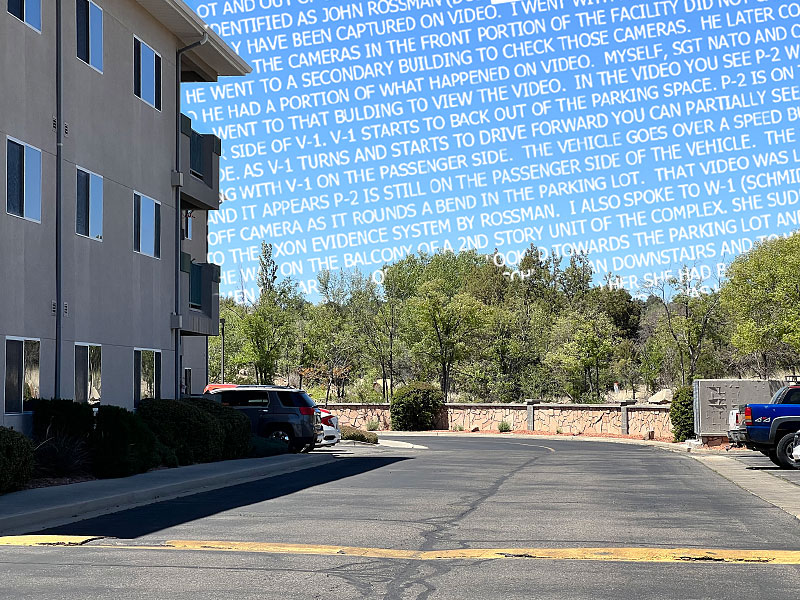 Although it was an accident, there are still consequences

The evidence points to an accident

To answer the most critical question at the beginning, yes, former LD1 Representative Noel Campbell, who was also running for Arizona LD1 Senate, allegedly ran over his wife, Mary Beth, with his vehicle. It does not appear to be intentional. However, Noel left the scene, claiming he didn't realize what happened.

Their argument started earlier in the day, according to Noel.  In an effort to defuse the situation, he left the house, and decided to go to the carwash. While at the carwash, he said he spoke to Mary Beth on the phone. He told Mary Beth that he was going to Las Fuentes to visit a friend.

During a later interview at Attorney David Stringer’s office, Noel told police that he arrived at Las Fuentes, an assisted living facility, signed in, and sat down with a newspaper. It was about then that Mary Beth arrived, dressed in full motorcycle gear. Noel told Mary Beth he was not going to see his friend and “…they were going to leave.”

They exited the building, and Noel walked to his car, a hybrid Chevrolet Volt. He got into the driver’s side door. The windows of the vehicle were lowered a couple of inches to let the heat out of the car. Mary Beth went to the passenger side of the car, but it was locked, so Mary Beth started talking to him through the lowered window. Noel told Mary Beth he didn’t want to talk, and started backing up his vehicle.

In the police report, Sgt. Barto writes, “Mary grabbed onto the window and started to walk and talk to him as the vehicle was moving. Noel stated that after backing out of the spot he drove slowly towards the exit of the property and Mary continued to hold onto the car and talk to him. At some point Mary let go, so Noel rolled up the window of the car and drove off.”

Noel claimed he didn’t see Mary Beth fall or hear her scream, and didn’t feel anything different with his car. He went home and picked up his dogs. When police examined Noel’s vehicle, there was a vertical scratch mark going down the passenger side door. “The mark was consistent with someone or something falling towards the ground while making contact with the vehicle.”

All of the information so far is “according to Noel” because Mary Beth didn’t say much to the police.

What Mary Beth did say

Novak arrived at the same time as the fire department and a Lifeline ambulance. Members from the the Central Arizona Fire and Medical Authority (CAFMA) and Lifeline located the subject, and checked on her. She was keeping her arm very still and would not move it. She refused to identify herself to the medical staff, and was uncooperative with any treatment. One of the firemen asked Officer Novak to step away, since he believed that the policeman’s presence was the reason for her lack of cooperation.

Suspecting the female to possibly be involved in a domestic violence situation, Officer Novak explained he had to identify her. She made statements that she did not want to identify herself, asking what crime she had committed.

Although she did not have her identification on her, she finally gave her name as Mary Elizabeth Campbell. Officer Novak confirmed it was her through a copy of the MVD photograph that dispatch sent to him.

Officer Attenberger was able to have a conversation with Mary Beth (as she is known around Prescott), and eventually Mary Beth agreed to speak with Officer Novak.

Mary Beth admitted that she and Noel were arguing, but when asked, Mary Beth said she didn’t know what they were arguing about.

Officer Novak writes, “Mary explained that she was at 1035 Scott Dr to visit someone. Noel was already visiting the person that Mary came to see. Mary stated that she and Noel got into an argument. Mary and Noel wound up outside. Mary was at Noel's vehicle. Mary stated that the argument got out of hand. When Mary was asked where the contact of the car into her happened and she pointed to the northeast corner.”

Mary Beth was transported by ambulance to the Yavapai Regional Medical Center where she was treated and released. According to their attorney, Glen Hammond, her arm was not broken.

A female witness, identified as Rae-Ellen Rogers, a staff member at Las Fuentes, showed Sgt. Barto the registry book where Noel signed in. Barto explained, “Rogers went onto say that Campbell comes to the facility several times a week to see a friend that lives at the facility. Today when he came, he walked in and sat down in the common area and began reading the newspaper. A couple of minutes later a female dressed in motorcycle attire walked in and contacted Noel. Rogers stated that the two began to argue. Noel ended up standing up and walking out the door. As he did he attempted to slam the door on the female. Noel was unsuccessful and the female walked out shortly after.”

Another staff member, John Rossman, shared with the police a video from Las Fuentes that partially showed the incident. Sgt. Barto described what he saw in the video. “The video shows a light colored sedan parked on the east side of the building. You can see the head of a subject on the passenger side of the car. The car backs out of a parking space then drives north through the lot. The subject on the passenger side stays next to the car while its moving. The car is traveling at a relatively slow speed. The vehicle goes over a speed bump and the person stays with the car. The vehicle continues to drive away from the camera. Its hard to tell if the vehicle runs over anything but it does come to a stop for approximately 10-15 seconds and then continues. The vehicle eventually leaves the area.” 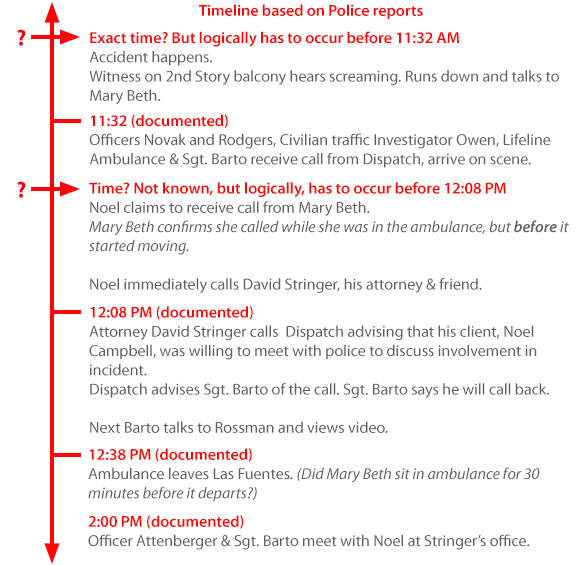 “At this point in the case there are inconsistencies in Noel's statements,” Barto writes. “Attached to the report is the time stamped radio log which shows David Stringer calling police dispatch at 1208 hours and the ambulance leaving Las Fuentes at 1238 hours. The video was entered into evidence.com. The video clearly shows the Chevy Volt stopped in the parking lot for 10-15 seconds before leaving the scene. This is the area that a witness describes Mary being runover. With all of this being said the report is being submitted for review of three counts of leaving the scene of an injury collision.”

However, it is up to the County Attorney to determine if someone should be charged and prosecuted. 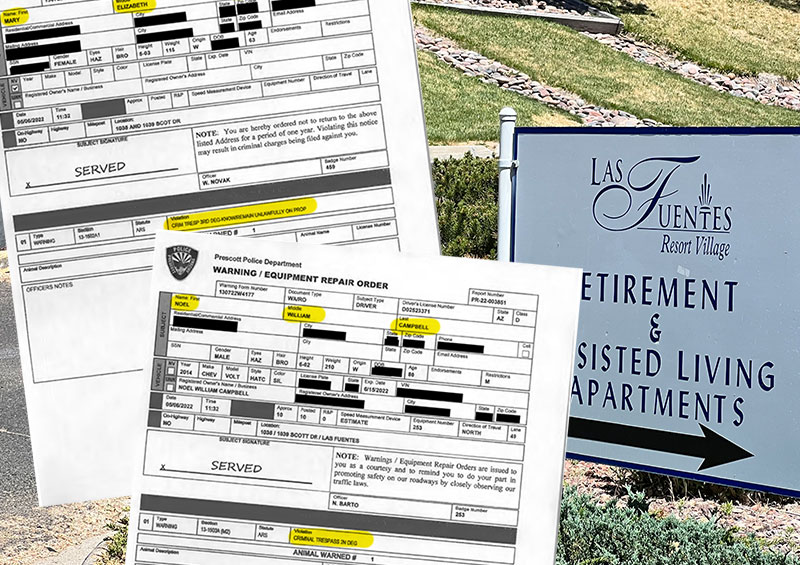 Additionally, both Noel and Mary Beth were served with “No Trespassing” orders, ensuring they will not be able to return to Las Fuentes for a year. Noel’s was 2nd degree, Mary Beth’s was 3rd degree. 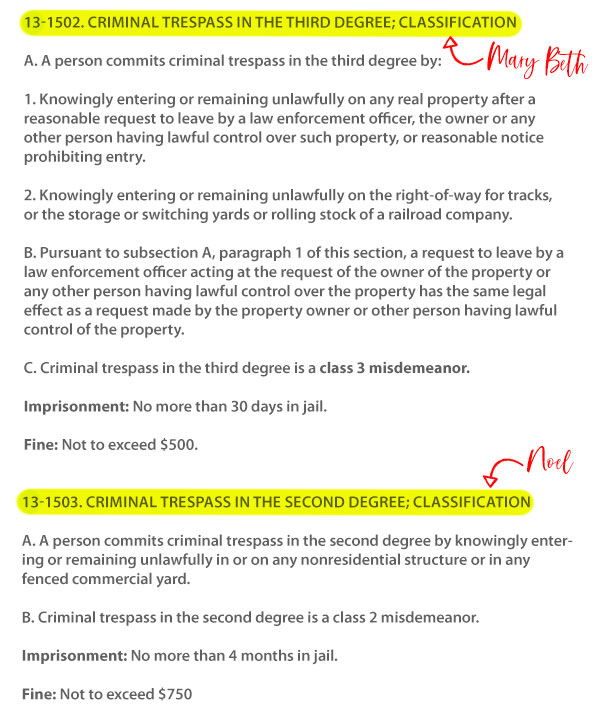 Two days after the incident happened, Noel dropped out of the Senate race. Noel is the 2nd candidate to drop out - Ann Marie Ward suspended her campaign a few weeks ago, citing an unexpected health issue in her family.

Here is the statement Noel released about dropping out of the campaign: 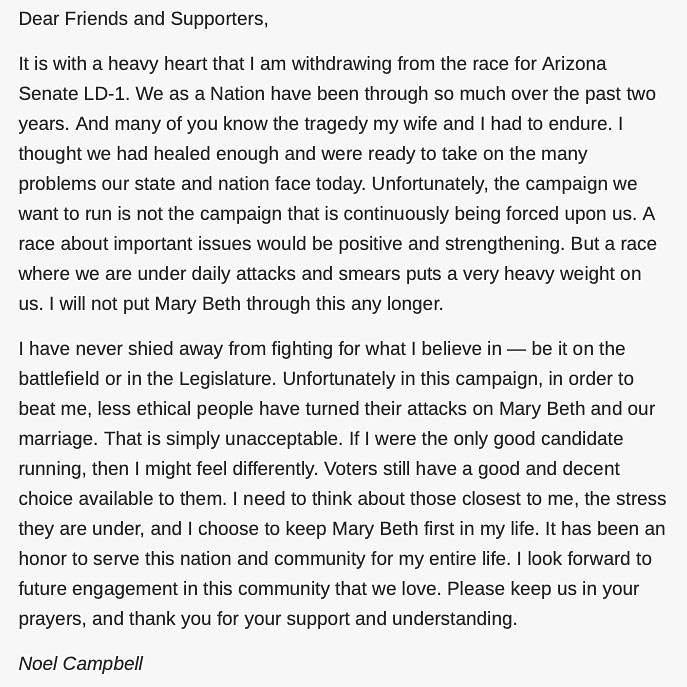 “Mr. Campbell and his wife both spoke candidly about this unfortunate incident with Prescott police officers.  As the YCAO liaison stated, there was no probable cause for any arrest after speaking with them and reviewing the parking lot surveillance video.  We have no additional comment upon what they hope will remain a private matter from this point forward.”

Noel Campbell is 80 years old. He has committed decades of his life to public service as a Naval Commander, a US Customs agent and a helicopter and tanker pilot fighting fires for the US Forest Service. For six years, he served in the Arizona Legislature representing LD 1 in the House of Representatives. Noel loves Prescott and it’s history. He is a member of the Prescott community. In recent years, his wife, Mary Beth, served alongside him.

No matter what happens in regards to this unfortunate situation, the contributions Noel and Mary Beth have made in service to nation, state and community should not be forgotten.