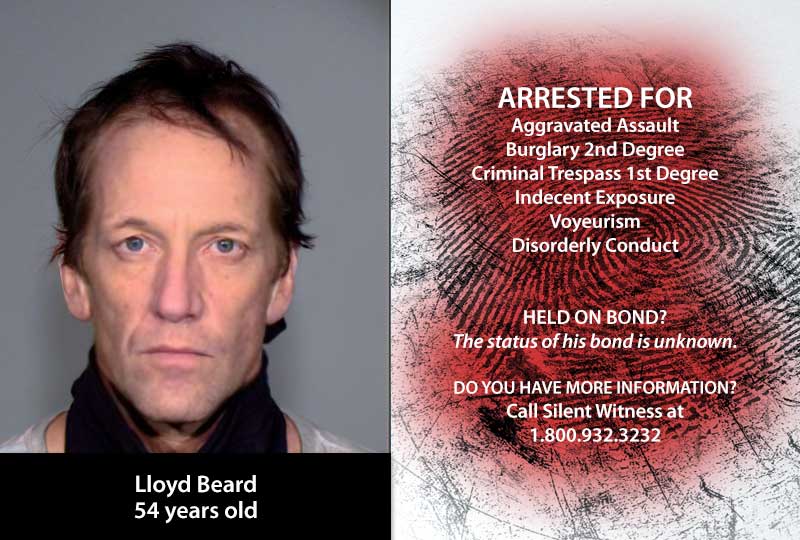 Paulden Mom stops attacker who broke into her home

The attacker was a level 3 sex offender

Wednesday morning, at approximately 3 a.m. YCSO responded to a trespassing in progress on State Route 89 in Paulden. What was originally thought to be a “simple” trespassing call turned out to be much more serious.

54-year-old Lloyd Beard of Prescott broke into the home of a mother, her 12-year-old daughter and 16-year-old son, where Beard made his way to where the daughter was sleeping. The daughter reported that he began touching her face and got into bed with her. The daughter was able to wake her mother, who physically removed Beard from the residence when he refused to leave. She then confronted him in the yard where he was exposing himself and threatening to “drop her”.

Beard took off running, and mom and her teenage son chased him down to prevent him from escaping. When deputies arrived, Beard was laying on the ground with his pants down and had minor injuries from his struggle with the mother. He was medically treated on scene then transported to the hospital. He has been released from the hospital and taken to the Yavapai County jail where he is awaiting booking on numerous counts of Aggravated Assault, Burglary 2nd Degree, Criminal Trespass 1st Degree, Indecent Exposure, Voyeurism, and Disorderly Conduct.

The quick action of the mother saved not only her daughter from further trauma but managed to help take a dangerous predator off the streets. Lloyd is a level 3 sex offender who registered with the Yavapai County Sheriff’s Office last week.

"Violent sexual crimes against children are among the most heinous offenses I can think of. I am always as shocked as all of you at the capacity of these appalling offenders to prey on the vulnerable” said Sheriff David Rhodes. “These violent criminals must be removed from society, and we will always seek to prosecute them and fight for justice for their victims”.

The Yavapai County Sheriff’s Office maintains a sex offender registry and “OffenderWatch” system to manage and monitor the whereabouts, conduct and compliance status of the registered offenders in Yavapai County. Offenders move frequently, so YCSO urges the public to take advantage of our free email alert system. You may confidentially register as many addresses in the County as you wish, and we will continuously monitor the addresses and send you an email alert if a new offender registers an address within the specified radius of any address you register. There is no cost for this service and no limit to the number of addresses you can register - your email address and physical addresses are all confidential.

To learn more about the OffenderWatch program, register for emails, and search for offenders in your area, please visit the link below.