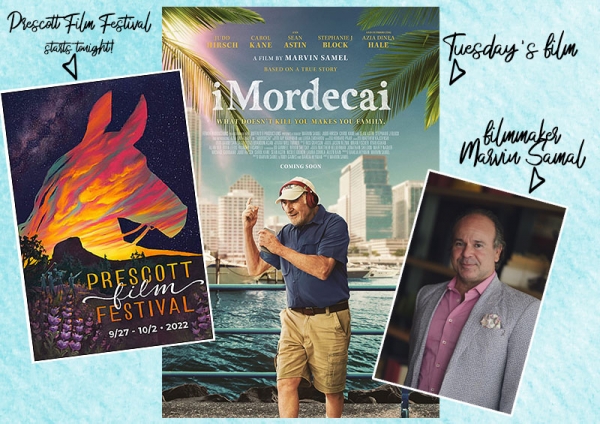 It’s the opening night for the Prescott Film Festival, and the family is in for a treat.

The Prescott Film Festival starts tonight at 7 PM. You don’t want to miss it!

>>Click on Schedule, choose the Tuesday tab, then click on the word, iMoredecai for more information about tonight's screening. (Sorry, direct linking is not possible with this website.)

Young or old, you can relate to this first film (although maybe from different perspectives!) called iMoredecai. Judd Hirsch plays Mordecai, a holocaust survivor,  who relies on a flip phone. When that flip phone stops working, it’s time for an upgrade to a brand-new iPhone, his family assures him.

Mordecai ends up experiencing many adventures as he moves into a new world of technology.

I don’t know about you, but having experienced both teaching people about their new iPhone, and getting iPhones of my own, I can imagine some pretty hilarious scenes.

There really isn’t a trailer for this movie, but there is an interview with the filmmaker you can see here:

Speaking of Director Marvin Samel, he is flying in from Florida for a Q&A after the film. And then, after that, a Cabaret After-Party will follow.

The Prescott Film Festival will continue through Sunday, October 2, with great films every night, and several on Saturday.

As usual, the viewing selections are thoughtful and chosen carefully, with many extra events included. Filmmaker interviews take place with almost every screening, either in person or via Zoom.

Tickets are available at the Yavapai College Performing Arts Center box office, or at their website, or at the door. You can also call 928.776.2000.