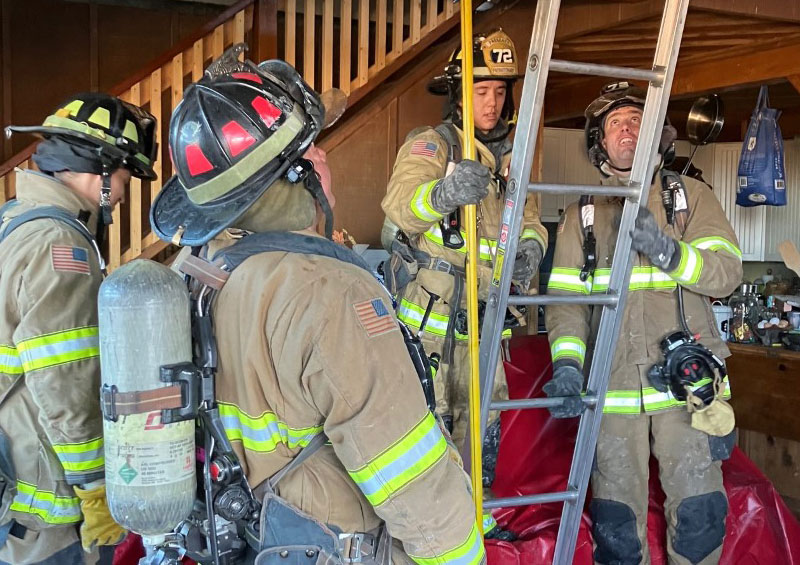 One of our newest firefighters, Spence Smith on a ladder inside the structure.

Firefighters battle blaze, able to confine it to small space

About 7:30 AM on Sunday, November 27th, Prescott Regional Communications Center received a 911 call about a possible chimney fire in the 1700 block of East Chisolm Trail in Prescott. When the initial Prescott Fire Engine arrived on scene they noticed smoke coming from around the chimney of a 2200 ft² house. The scene was made a little more complex as the driveway was about 600 feet long and there was no dedicated fire hydrants in the area. When crews entered the house, they noticed that there was burning in the drywall space around that chimney. They pulled down that drywall in an attempt to knock down the fire. They were successful in confining it to a small area of the attic and living room. On scene, they were three Prescott Fire engines, one CAFMA water tender, a battalion chief, Lifeline Ambulance and law-enforcement. In total, fire department crews were on scene checking for fire extension for a couple of hours.

Not saying it was the case in this fire, but working smoke detectors are critical in the safety of your house and family. Test the smoke detectors monthly. Once a year, change the batteries with a high-quality alkaline replacement and practice exit drills with everyone in your family to insure everyone knows at least two ways to safely exit from any room.

Remember that chimney safety comes with two things. Once a year, have it thoroughly inspected and also have it professionally cleaned. That could mean the difference between a crackling fire in the fireplace and a crackling fire someplace that it doesn’t belong.

As always, be alert… Expect the unexpected and think of fire safety before it starts!