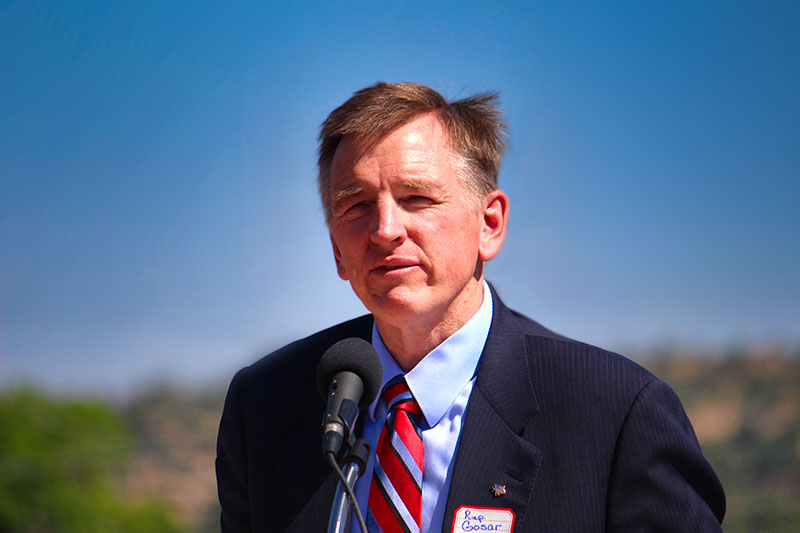 Votes This Week - How I Voted and Why:

Issues Voted on This Week

This week, the House passed a bill that would drastically reform our healthcare system for the better. A statute that's over 70 years old grants health insurance companies an exemption from antitrust laws. This law, also known as McCarran-Ferguson, has created years of only a few companies exerting dominance over the market allowing for little options and higher prices for healthcare.

The bill we passed by unanimous consent was titled the Competitive Health Insurance Reform Act and this bill would simply repeal the outdated exemption from existing federal antitrust laws for the business of health insurance, injecting a much-needed dose of competition into the healthcare marketplace. We can’t even begin to imagine the creativity and innovation that will come about from competition that puts the patient first. It’s now on the shoulders of the Senate to push this powerful legislation across the finish line. I encourage anyone reading this to reach out to their home state Senators and tell them how important this bill is and the need to pass it. The U.S. Capitol Switchboard is (202) 224-3121. A switchboard operator will connect you directly with the Senate office you request.

In the Xinjiang region of China, ethnic minorities like the Uyghurs, Kazakhs, and Kyrgyz are systematically oppressed by the Chinese Communist Party, forced into prison camps, and suffer from a range of human rights violations. The prisoners at these camps are subject to forced labor, and unfortunately, these products are forced into the global markets and sometimes even the U.S. Many items in our own homes may be the product of the worst system of forced labor since World War II.  If passed in the Senate and signed into law, this bill would stop Americans from unwittingly benefitting from Uyghur atrocities.

We cannot allow systemic oppression by communist forces to impact the global market. That is why I voted for the Uyghur Forced Labor Prevention Act which would:

This legislation is necessary to acknowledge the human rights crimes of the Chinese Communist Party and to punish their actions. By removing the market associated with goods from forced labor both in the U.S. and globally, the U.S. is sending a clear signal that China is a human rights abuser and these practices will not be just exposed by the U.S. but punished as well.

Again, I encourage anyone reading this to reach out to their home state Senators and tell them how important this bill is and the need to pass it. The U.S. Capitol Switchboard is (202) 224-3121. A switchboard operator will connect you directly with the Senate office you request.

Also this week, the House passed a temporary spending bill that will keep the Federal Government open until December 11th, 2020. This stopgap measure is just simply kicking our spending problem down the road. Now more than ever, we need to take the time and effort in Congress to dissect federal spending and save the taxpayers money. We spend way too much on unnecessary programs that are now ingrained in our yearly budget. The first step in cutting our budget would be to have conversations, hearings, and input from all members going line by line of all expenditures like any family or business would do. Unfortunately, we have a Democrat leadership that hands us spending packages within 24 hours of the vote with little to no input from most members. For all these reasons and more, I voted against the measure to kick the can down the road.

Lastly, the House of Representatives voted on an energy package chock-full of Democrat priorities. Like many bills under Pelosi’s leadership, this bill was extremely partisan and was destined to die in the Senate. This bill would substantially increase federal spending to establish, reauthorize, or expand numerous federal energy programs. This legislation primarily focuses on implementing climate change related projects and policies and does so through expansive, market-distorting government subsidies, increased regulation, and increased federal interference with state and local governments and the private sector. I was proud to vote no against this measure.

This week, as part of my role as Chairman of the Congressional Western Caucus, I hosted a roundtable with the Chairman of the Federal Energy Regulatory Commission (FERC) Neil Chatterjee. This roundtable focused on the work FERC is doing to expand U.S. energy transmission capacity so that we continue to have the most reliable energy grid in the world. I specifically asked the Chairman about the need to streamline the permitting process for transmission projects, as the current 10 to 15-year timeline to build transmission infrastructure is not sustainable. I also pressed the Chairman on what the Commission is doing to ensure the rest of the country does not have the same energy shortfalls that California has recently experienced.

You can view my discussion with Chairman Chatterjee HERE

Letter to the Department of Justice to investigate Planned Parenthood

This week, I joined several of my colleagues in a letter to Attorney General William Barr to investigate whether Planned Parenthood has violated the Partial-Birth Abortion Ban Act. In a recently published video by the Center for Medical Progress and from unsealed sworn testimony, the Vice President of Abortion Access at Planned Parenthood Gulf Coast made comments regarding abortions in his clinic where babies are delivered “a little too intact.” This statement, and the many others made, indicate that Planned Parenthood may be violating the Act by facilitating partial-birth abortions. This allegation is deeply concerning on a moral and legal level, and that is why I have joined this letter to call for further investigation into these claims. Not only is the health of the unborn at stake in this situation, but compliance with U.S. law is as well. I will continue to fight and defend the unborn.

Friday, President Trump also issued an Executive Order on Protecting Vulnerable Newborn and Infant Children, which is a very big deal and has my full support.

Investigating the Rise of Anti-Catholic Crimes

The First Amendment is one of the most profound legal provisions in the world and serves as the very bedrock of our nation. It is why the colonist sought a new life in America. Yet, in recent months destructive crimes have been perpetrated against Catholic Churches, property, and statues. Some estimates suggest that there have been 70 incidents in North America this year, with the vast majority occurring within the last four months. That is why I joined several of my colleagues in a letter to Attorney General Barr asking the Department of Justice’s Civil Rights Division to investigate this concerning trend. Whenever there is a tangible increase in hate crimes against a specific group, it is the job of the Civil Rights Division to investigate. These crimes against Catholics threaten America’s notion of equality and freedom as a whole and must be addressed.

You can view the text of this letter HERE

This week, I sent a letter to the U.S. Trade Representative and the Department of Commerce requesting initiation of negotiations to develop a comprehensive Bilateral Trade Agreement between the U.S. and Taiwan. Taiwan is the 15th largest foreign investor in the U.S. and our shared enterprises support nearly 100,000 jobs. Taiwan has already taken significant steps toward solidifying this agreement, which is supported by President Trump and also by the Arizona State Legislature. Taiwan has much to offer the free world and is a symbol of economic freedom and democracy in an area of the world dominated by China. A Bilateral Trade Agreement would benefit Arizona’s agriculture, livestock, commerce, and high-tech industries and make America stronger by strengthening our alliance, securing our supply chains, and countering China’s strategy to become a singular global leader by 2049. That is why I am urging the Trump Administration to begin this process and I eagerly await their determination on this matter.

A copy of the letter can be found here.

This upcoming week, I will be speaking about the atrocity that is the Affirmatively Furthering Fair Housing (AFFH) and the risks these regulations pose to our suburbs. This rule makes the federal government the most powerful HOA in America dictating housing density, community decisions and overruling local design in favor of one size fits all government plans for our neighborhoods.

FINAL FINAL Reminder to Fill Out Your Census! (Three Days)

The finalization of the Census data collection is fastly approaching. Follow-ups conducted by Census workers will continue throughout this month, however, the Census Bureau recently announced that all collection efforts will end September 30th so the final count can begin. As one of the fastest-growing states in the country, completing your Census by September 30th is crucial to ensuring our state is apportioned with the correct amount of Congressional seats and the necessary amount of federal monetary assistance. The Census ensures your democratic voice is complete, full, and fair as guaranteed by your Constitutional rights. All households were mailed a Census questionnaire in the spring to fill out (black or blue ink!) and mail back. If you no longer have this document or wish to complete it online, please follow these directions for an alternative response.

Individuals who do not normally file income taxes are still eligible to receive payments. But they only have until October 15, 2020, to submit their information to the IRS through the non-filers portal to get their EIP. For more information contact: This email address is being protected from spambots. You need JavaScript enabled to view it.. In the interim, you can also access the IRS toolkit.

I continue to fight for additional relief as necessary. The government imposed shutdown and social distancing guidelines have often empowered large international corporations like Amazon while crushing many AZ-04 businesses, families, and individuals. It is the responsibility of the government to make whole the citizens and their businesses negatively impacted. As the House, Senate, and President Trump propose solutions and negotiate additional relief I have continued to fight for the many requests from the district including but not limited to: suspension of all payroll taxes, suspension of taxes on tips, diverting foreign aid back to American taxpayers, local relief, additions to the Paycheck Protection Program, infrastructure funding, tax deductions for PPE, repeal of the exemption from antitrust laws for the business of health insurance (passed the House this week), ensuring resources are not allocated to illegal aliens or wealthy companies looking to exploit this crisis and more. I will continue to fight for necessary relief.

In these unprecedented times, there are several Arizona and Federal resources available to assist your family. However, as many people in America are looking for assistance, many of these government agencies have been overwhelmed with inquires, slowing their response time. If you are seeking assistance and not receiving timely responses, please do not hesitate to contact my district or Washington D.C. offices. My staff of dedicated caseworkers are here to help.