Give 2020 the Boot via Online Celebration! Featured 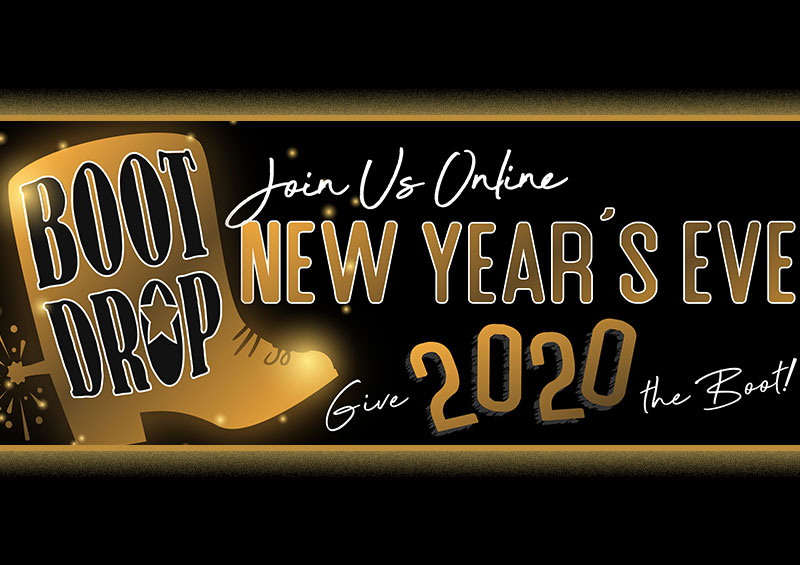 Prescott, AZ. – The cancellation of the Whiskey Row Boot Drop event was announced earlier this month, but the event planners are still going to help people ring in 2021 in a special way. Revelers can say goodbye to 2020 at the 10th annual celebration on Thursday, December 31st, 2020 by clicking on the link provided below or simply visiting BootDrop.com. Programs will be set to air live at 9:30pm to celebrate a virtual Boot Drop at 10pm and then again at 11:30pm to ring in the official New Year at midnight. Sparklight cable customers can tune in to channel 64 locally to also view the special show. The program is filled with live entertainment, messages from local leaders, including Prescott Mayor Greg Mengarelli, and is hosted by Leza from Leza Live on Magic 99.1 and Marco Espitia from M & M Entertainment & Production.

"Of course, we were all disappointed to have to cancel this year’s live event, but we didn't want to end the year on that note. This is a creative way for all of us to come together and still give 2020 the boot. We’ve been working with several local production companies to make this program happen" said Matt Brassard, co-owner of M & M Entertainment & Production. “There is so much talent here and it was amazing how quickly everyone stepped-up to help, and we promise, this will be the next best thing to being downtown Prescott live.”

Prescott Pro Sounds, who normally is on the street that night directing the stage and sound, worked alongside Raven Productions and Big Picture Video to create the half hour show. Scandalous Hands originally slated to be on stage, performs to two songs on the video and local performer, Candice Devine will close the show with a beautiful rendition of Auld Lang Syne. Pop singer, Drew Ryn from Chino Valley, who appeared as a contestant on the national show the X Factor, has given permission to use her latest top of the charts video on the program as well.  Past year’s footage will show the actual boot being lowered from the Palace building’s flagpole to ring in the New Year.

“We’re grateful to everyone who helped make this happen and hope it can bring some positive closure to this difficult year. Though no one will be on the street celebrating that night, the Boot will still be on the Palace building lite-up so people can come and say good-bye to the year in their own private way,” Brassard stated.