Prescott Station Closes at the Insistence of the Health Department Featured 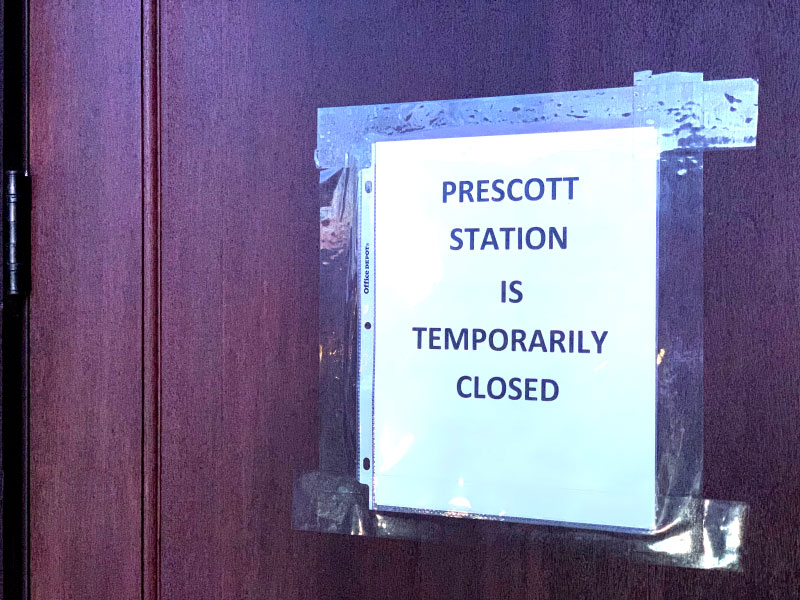 After months of negotiations, the Prescott Station Bar & Grill was compelled to close

While the rest of the world deals with the COVID-19 pandemic, Yavapai County Community Environmental Health Services pursued efforts to close Prescott Station

On October 9, 2020, during the Board of Health meeting, Cecil. Newell from the Environmental Health department reported:

Prescott Station isn’t mentioned here by name, but it is almost certainly the restaurant in question. So, what led up to this?

Prescott Station Informed They Must Close

In a letter prepared on September 3, 2020, The Yavapai County Community Health Services (YCCHS) Department informed the Prescott Station Grill & Bar, and the owners, Robert and Linda Gabrick, of the intention to seek a Revocation of License to operate their establishment. The reason given was that the “…establishment was not meeting minimum requirements…" of the 2017 FDA Food Code, and the Yavapai County Health Code and ordinances.

The Gabricks responded that they wished to request a hearing for the Revocation of License. That hearing took place on Monday, October 19, 2020, before Larry Jacobs, Yavapai County Hearing Officer.

In January of 2019, Yavapai County adopted the 2017 FDA Food Code. Before that, they operated under the 2009 FDA Food Code. According to Ms. Monica Kriner, the Unit Manager and CASA Program Administrator for YCCHS, Prescott Station had long standing and systemic problems.

Robert Gabrick thought the Health Department inspections were for guidance and correction, and did not realize that they were considering closing the restaurant.

In the 2017 Code, three types of problems are listed:

Core Item: Not critical, but it can have an affect on preventing food illnesses

Their last inspection on December 23, 2020, had no Priority or Priority Foundation violations, but 1 core violation - two lights had a bare exposed light bulb that was not shielded or shatter resistant.

The inspector wrote, “Provisional inspection conducted this date. Dinner service observed with no priority or priority foundation violations noted at this time. Facility is very much improved from previous visits.”

According to the Health Department, Prescott Station, “…has shown a blatant disregard for public safety (most recently from 2018 to the present). They continue to show a disregard for high risk for food borne illness it creates in the way they operate their facility…”

Yet, Gabrick was quite responsive to their concerns, making $81,700 in repairs and upgrades within the last 18 months.

Additionally, they invested nearly $500,000 into the property itself.

The Hearing Officer Releases His Findings

In his final judgment on October 26, Jacobs stated that:

Instead, YCCHS completely ignored Jacob’s findings. In an email sent two days later to the Gabrick’s attorney, Joy Biedermann, Deputy Yavapai County Attorney, wrote on October 28, that the YCCHS was only willing to offer only the following:

If Prescott Station is successful with a sale, the new owners will have to apply for a Provisional Permit with the following requirements:

Furthermore, YCCHS isn’t even following their own protocols. According to the Yavapai County Health code (page 12), it reads:

On Thursday, December 30, 2020, Robert Grabrick and his attorneys were granted an emergency hearing before Judge Michael McGill for a Temporary Restraining Order against the County closing the restaurant. McGill denied the request.

According to Gabrick, Judge McGill relied on a law from the late 1930’s, which precluded him from deciding this case. Gabrick reported that McGill said he had hoped there would be a settlement reached amongst themselves in advance of this hearing, but that he believed it was likely that Gabrick had grounds for a civil suit against the Yavapai County.

Despite the fact that Gabrick was able to show a letter of intent from a potential buyer, YCCHS would not relax their requirements.

Gabrick worked hard to bring the Prescott Station into compliance - and what does he get? An irreversible order to close that went against the County Hearing Officer’s ruling and didn’t even follow their own protocols. This action by YCCHS caused irreparable harm to his business, knocked 33 employees out of a job, and caused thousands of dollars less to be paid in taxes for our community.

It appears likely that this is not the last court appearance for the Gabricks over this case.

Gabrick is proud of the thousands of meals served, and the multiple awards they received. On New Year’s Eve, Prescott Station served, “...235 perfectly executed dinners, while saying good bye to people, knowing that it’s the last dinners we would serve, but we served them perfectly. The customers were unbelievably happy. But the Health Department was closing us down even though we did nothing wrong."

As for YCCHS? They’ve already removed information about Prescott Station inspections from their website.