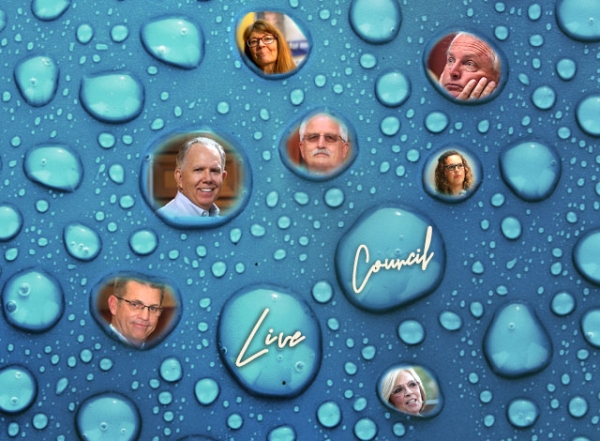 It's the first Live Update of the Prescott City Council meeting in 2021.

Councilwoman Billie Orr is reviewing her term on Council.

This meeting may be viewed on Channel 64 and Facebook Live as well as on the City's website: City Council Live Meeting Videos

Or via Zoom by registering in advance at: Zoom Registration Link

Comments from the public may be submitted through the City website: Speaker Request Form

B. Appointment of Jim Lamerson to the Board of Adjustment and Tim Holt to the Pedestrian Bicycle & Traffic Advisory Committee.

C. Approval of Retention of Outside Legal Counsel for Airport and Aviation Law Matters.

H. Approval of City Contract No. 2021-095 with Jack McClung for the Donation of "Raven" an Original Framed Photograph to the City of Prescott.

J. Approval of City Contract 2021-087, an Intergovernmental Agreement with Arizona Department of Transportation for Pavement Preservation Work at Prescott Regional Airport, to Include a 10% Payment in the Amount $31,347. Funding is Available in the Airport Fund.

K. Acceptance of Grant No. E1S1M01C from the Arizona Department of Transportation in the Amount of $1,575,000 for a Perimeter Security Upgrade Project at Prescott Regional Airport.

L. Approval of City Contract 2011-003AS01, Consent to Assignment of Lease from Guidance Helicopters, Inc to Hangar 3, LLC for Property at Prescott Regional Airport.

M. Approval of City Contract 2005-251AS02, a Consent for Assignment of Lease from Prescott Hangars, LLC to Juliet Tango, LLC, for Property Located at Prescott Regional Airport.

Miscellaneous Concrete Repairs & Demerse/Morell Storm Drain Project in the amount of $169,000. Funding is Available in the Streets Fund.

She wants the new attorney for the airport to be paid out of the Airport fund, not the general legal fund.

She clarifies the scope of the new attorney's responsibilities.

Goode expresses his approval of this appointment, but also offers his opinion that the airport manager should be able to jump over the City legal department and go directly to the new attorney. He claims that in the past some of the legal counsel he has received was less than satisfactory. (paraphrased by this editor). Paladini responded that his job responsibilities are clear in the City charter, and he's going to follow the law, therefore matters referred to the aviation attorney will go through him.

Item F & G are being discussed together regarding the abrogation easement for this development.

These items are to determine noise levels and overfiight notes and ask the new airport attorney for the correct statements, etc.

Michael Lamar explains that this is why they want to have an aviation attorney on retainer. Lamar said he wants to know what the rules are, what they've already negotiated away, and what they should do in the future.

Councilman Goode says that it was his understanding that would-be buyers would be required to sign abrogation easement, but he does not think this has occurred. He expresses a concern about liability.

Attorney Paladini responds that developments around the airport have all had abrogation easements, but renogiating back twenty or so years may require some negotiations.

Item M: A discussion took place earlier in an Executive Session. Rusing wants to ensure that this lease is acceptable to the FAA, and notes that she thinks it is below market value. She wants the airport attorney should take a look at it.

Paladini said that the lease is being assigned from one legal entity to another, without changing the terms of the lease.

A. Adoption of Ordinance No. 2021-1738 Authorizing Partial Abandonment of an Easement no Longer Needed by the City.
AN ORDINANCE OF THE MAYOR AND COUNCIL OF THE CITY OF PRESCOTT, YAVAPAI COUNTY, ARIZONA, AUTHORIZING THE ABANDONMENT OF A PORTION OF THAT CERTAIN PUBLIC UTILITY EASEMENT LOCATED OVER A PORTION OF LOT 72 AND LOT 73, AS SHOWN ON THE FINAL PLAT FOR THUMB BUTTE ESTATES II, AS RECORDED IN BOOK 21 OF MAPS, PAGE 38, RECORDS OF YAVAPAI COUNTY, ARIZONA AND AUTHORIZING THE MAYOR AND STAFF TO EXECUTE ANY AND ALL DOCUMENTS TO EFFECTUATE SAID ABANDONMENT OF EASEMENT.

AN ORDINANCE OF THE MAYOR AND COUNCIL OF THE CITY OF PRESCOTT, YAVAPAI COUNTY, ARIZONA, REPEALING PRESCOTT CITY CODE TITLE IX, CHAPTER 9-1 (PRESCOTT TRAFFIC CODE) SECTION 9-1-20 (USE OF ELECTRONIC DEVICES).

Permitting requests spiked from previous months in December. They are buried and not able to keep up.

Much, but not all, of the cost will include cost recovery. Expected that the new inspector will cross-train.

Mayor Mengarelli compliments their extra efforts during the pandemic, noting that they were able to pivot during a difficult time.

Billie Orr states that she supports this and wants to support the construction industry.

B. Adoption of Ordinance No. 2021-1742, Amending City Code Title I (Administrative) Chapter 1-4 (Elections) by Adopting a New Section 1-4-4 Relating to the Number of Signatures Required on Nominating Petitions; Declaring an Emergency and Providing for a Severability Clause.

AN ORDINANCE OF THE COUNCIL OF THE CITY OF PRESCOTT ARIZONA, AMENDING CITY CODE TITLE I (ADMINISTRATIVE) CHAPTER 1-4 (ELECTIONS) BY ADOPTING A NEW SECTION 1-4-4 RELATING TO NUMBER OF SIGNATURES REQUIRED ON NOMINATING PETITIONS; DECLARING AN EMERGENCY; AND PROVIDING FOR A SEVERABILITY CLAUSE.

Currently, there is not a standard in the charter or the City code.

Rusing asked if they would have to collect fewer or more signatures? The standard doesn't change.

Another Public Comment: Not sure of name. Wants to know when packet will be available. Later this week.

This is a bit confusing to write about it - I recommend you listen to the full discussion.

However, this cannot be voted on this right now, because it includes changes to the City Code.

It sounds like it will be approved when it can be voted on with the Code changes.

The entire Item 8C cannot be voted on during this meeting, because it includes changes to the code.

What can be voted on passed 7-0

A very heated discussion. Councilman Goode has been undermining Attorney Jon Paladini all day long. Now, Goode's saying that he thinks part of this might not be legal. He thinks that it is possible that the developer can add more homes in the future, and the City is only obligated to provide water to 340 homes. It's obvious that Goode is going to vote against it. It would have to be voted on by the current council at the time. Goode also is unhappy about providing water to areas outside the City limits. He states that he will not support this resolution.

Councilwoman Orr apologizes to the owner, and says that the City of Prescott has missed an opportunity to annex this development.

(My browser just quit, so some of my notes were lost.)

E. Approval of Process for Filling a City Council Vacancy.
Recommended Action: 1) MOVE to approve filling the vacancy by either: a. appointing for the unexpired term (through November 2023) or b. appointing until the November 2021 election for a "short term" special election; and 2) MOVE to approve the timeline presented by staf for the application filing period and interviews for filling the upcoming City Council Vacancy.

Several comments received. Most were in favor of option "B".

They are hoping to have the filing period open for 2 weeks, then the Executive Session would take place, plus interviews in a separate Executive Session. The new councilmember would be seated by February 23, I believe.

Council voted for Option A, 4-2. Goode and Rusing in opposition.

Right now, it looks like the applications will be open for 2 weeks, starting tomorrow.

Blair wants it to be no longer than 2 weeks, and does not want anything done in Executive Session. If they were running, they'd be in the public light, anyway, he says.

Paladini notes that the applications are public records.

There appears to be consensus on a 2 week period for applications. What to do after that is still a little uncertain, part of that is because they don't know how many applicants they will receive.

So, they will likely discuss the process in an Executive Session after the applications have been received.