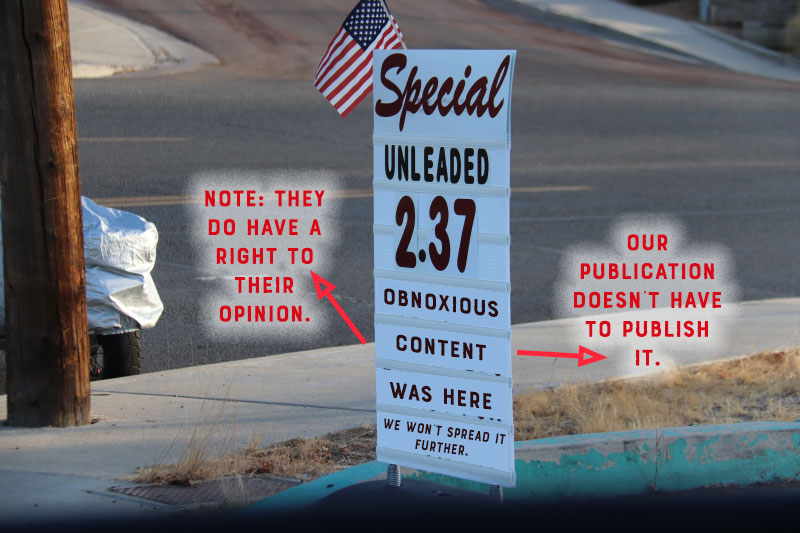 This photo was created by CopperState News. The City of Prescott did not provide it.

The City is bound to uphold the Constitutional rights of all citizens.

PRESCOTT, AZ (January 20, 2021) – The City of Prescott recently learned of offensive and abhorrent signs posted at a local business.   We absolutely reject the message on the signs, and similar rhetoric, however the City is bound to uphold the Constitutional rights of all citizens.

City Code inspectors spoke with the manager of the establishment, who moved the signs from the City sidewalk to their private property, but insisted on keeping the content as is.

The City is unable to regulate the content of signs on private property, regardless of how repugnant the content may be.  These types of signs are considered temporary, and in accordance with city code, are allowed to remain in place for up to 90 days.

Speech regardless of how offensive, is protected by the 1st Amendment, and the owner of the sign has the same protections as the news media, demonstrators or those on social media.

Over the past several years, the City of Prescott has supported events that encourage dialogue and understanding, including most recently, the virtual celebration of Dr. Martin Luther King, Jr.  Other events sponsored by the City include a virtual town hall for teens, entitled Better Together, where local youth discussed raced, diversity and inclusion together in a professionally facilitated event.  The Mayor continues dialogue with groups and citizens who are concerned about these matters.

The City of Prescott embraces, welcomes, supports and serves people of all backgrounds within the community and city organization.  We champion diversity and welcome individual perspectives, backgrounds and opinions.  In December of 2019, Mayor Greg Mengarelli and City Council Prescott received the Civic and Community Conscience Award from the NAACP Arizona State Conference.  The City will be engaging in racial sensitivity training for our entire staff in the coming year.