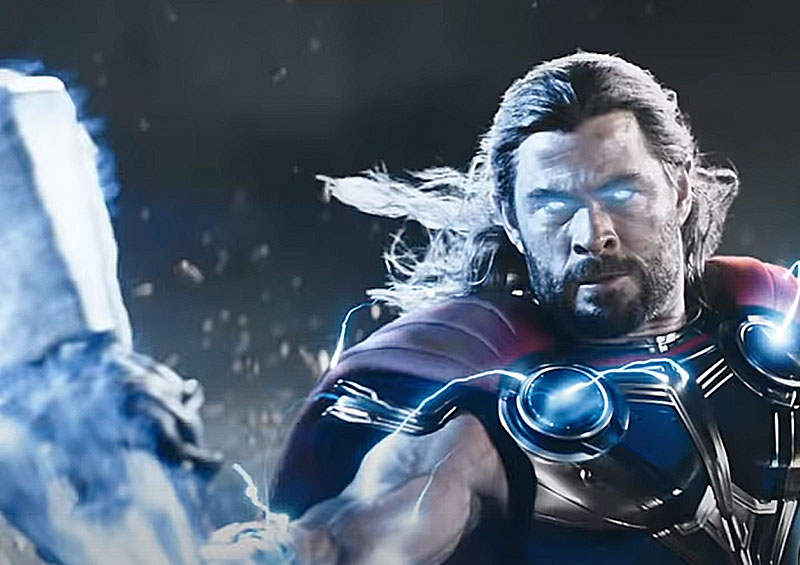 Cash and famous faces bring Thor back to the silver screen

This theatrical extravaganza has a cumbersome and erratic theme and a quite charming Thor!

Thor is returning from retirement and brings thunder and love with him.  Yaayyyyy.

The Marvel company, now a part of the Disney attempt to conquer the world, unleashed the most expensive summer blockbuster of the year and pulled out all the stops.  Besides the flood of cash, the cast includes a vast assemblage of famous faces.

Chris Hemsworth returns as Thor.  I can't think of any living actor who can successfully make us believe he IS the God of Thunder.  He has a commanding screen presence and is as buff as a college athlete, not a thirty-eight-year-old man.  Hemsworth also has excellent comic chops, as we know from his hilarious stint as the ditzy secretary in the 2016 "Ghost Busters.”

We also see (or hear) Dave Bautista, Pam Klementieff, Karen Gillian, Sean Gunn, Chris Pratt, Vin Diesel, and Bradley Cooper.  The "Guardians of the Galaxy" team comes out as a body.  I would watch "Thor: Love and Thunder" just to see the Guardians team once again.

With a budget of $250 million and a bucket full of famous stars, will people come to see this mighty theatrical extravaganza?  You can bet your bippy they will.

Writer/director Taika Waititi returns to his task after presiding over "Thor: Ragnorok."  Oscar-winner Waititi, a New Zealander, made "Jojo Rabbit" and the wonderfully entertaining comic take on Vampires, "What we do in the Shadows."  Waititi also acts.  We saw him recently as the villain in "Free Guy," and he had a voice role in "Lightyear," a Disney/Pixar production.

I grant that people will pour into the theaters and enjoy the movie.  But is the movie any good?  Well, it is cumbersome, complicated, and erratic in its theme.  We have heroic moments and comic moments mocking heroes.  We have introductions to gods from all cultures, including the god of dumplings.  The gods are mocked and made to seem both ridiculous and despicable.  And yet the movie makers want us to take Thor seriously in his guise as the god of thunder.  It is a mush, conceptionally and emotionally.

It is fun, though.  People will ignore the parts they don't like and focus on the color, the great rock and roll soundtrack, and the joyous reunion of Thor and Dr. Jane Foster.

This is a summer blockbuster, and no one, even great fans, will take it seriously.

"Thor: Love and Thunder" gets a stupendous but average three saw blades.  This movie entertains us without causing a ripple in our cognitive parts.  It has a mild PG-13 rating and runs almost exactly for two hours.

The movie makers eliminated a nude Thor scene to maintain the PG-13 rating.  The most ardent fans of Chris Hemsworth are still pouting.

Rate this item
(0 votes)
Last modified on Saturday, 09 July 2022 20:01
Published in Reviews
Tags
« Review: b. simple Restaurant Movie Review: Where the Crawdads Sing »
back to top