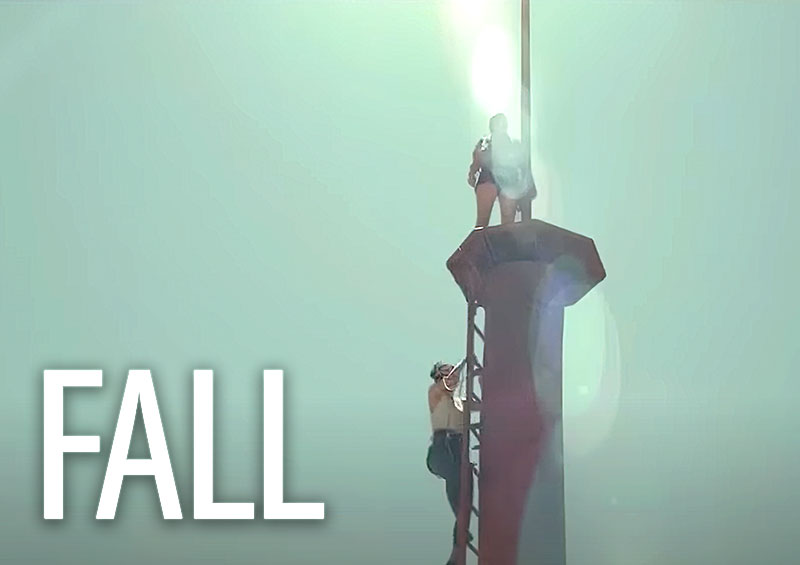 Sometimes getting down is harder than climbing up

We have come to the end of the season of summer blockbusters, much to our collective regret. We now enter the doldrums of small, genre films. “ Fall” begins that process of winding down the noise and color and ramping up the more human scale of intense, emotional films. In a good year, the fall season is my favorite part of the movie year.

In “Fall,” we have two female athletes, climbers, do some self-diagnosed therapy by climbing to the top of a disused two-thousand-foot tall communications tower in the Mojave Desert. In classic horror film tradition, they make rookie mistakes that cause them, and we in the seats, some life-endangering problems. Not that this is a horror film with ghosts or zombies or something, but it scared the bejeebers out of me. Two thousand-foot-tall derelict communication towers should be left clear alone, so say I.

But the bold climbers, played by Virginia Gardner and Grace Caroline Currey, forget to let anyone know what they plan to do. They get out of cell phone coverage, so they are entirely on their own when, as they must, things go haywire.

Currey and Gardner have a string of roles on TV and in the movies. They are in their mid-twenties, young but with many parts under their belts. They are tested and trained actors, if not yet famous. Currey has been acting professionally since she was five years old.

Director/writer Scott Mann has just a handful of films to his credit as a director. His most famous was “Heist,” a substantial movie with well-known names in nearly every spot. The public strongly rejected “Heist,” the famous faces notwithstanding.

Jeffery Dean Morgan, late of “The Walking Dead,” is the only famous name or face in “Fall,” and he only briefly. The two young women carry the whole film and do so while perched on the top of a frighteningly tall structure.

This movie terrified me. We are hard-wired to fear falling. The movie plays on this very human trait to the absolute maximum. Nearly the entire film has the two climbers perched precariously two thousand feet in the air, subject to death by impacting the Earth at any moment. It took over twenty minutes for my heartbeat to return to its normal state.

Those who seek an hour-long adrenaline pump will enjoy this movie.

“ Fall” will roundly scare those movie fans like me who are queasy about heights. The one-hour and forty-seven-minute film has a mild PG-13 rating. The diverting, if not edifying, film rates an average of three saw blades.

A fun movie fact-The producers excised a plethora of bad (the worst) words from the film, post-production. Using movie magic, they manipulated the lips of the actors digitally, so they said something more acceptable than what they said while on camera. Movie magic has come a long way, baby.