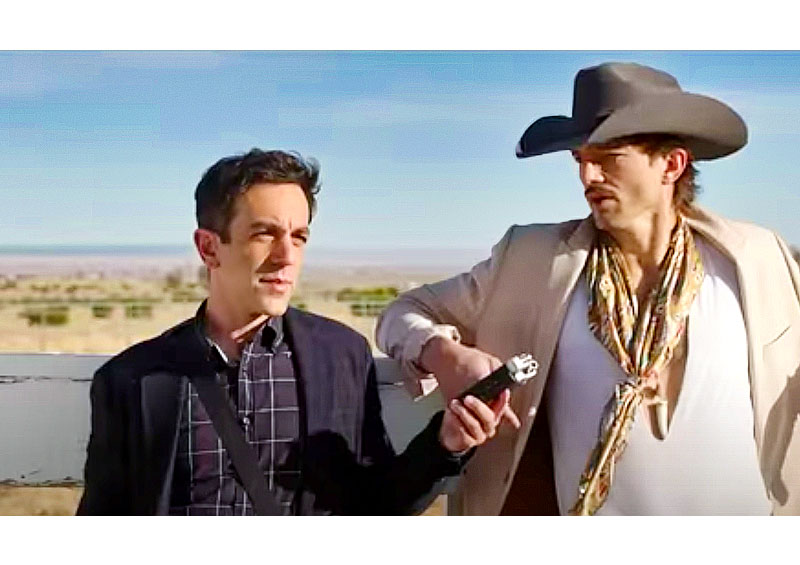 What happens when an intelligent New York guy goes to Texas to start a podcast?

An ambitious, small budget film which makes a big impression

Ben, played by actor, director, writer, producer, book writer, and comic B.J. Novak, goes to Texas from New York City to attend the funeral of a casual bedmate. Ben is an intelligent guy, a well-educated New York intellectual who aspires to break into the podcast field. He is morally shallow and ambitious. For him, people are simply tools to be used to advance his career or to give a few minutes of empty pleasure. As written by well-educated New Yorker Novak, the film character is familiar, mildly loathsome, and spot on.

Texas is, just as we might expect, a shocking revelation to him. In many other similar tales, we get a gloss of stereotypical rural yee haw stock Texas characters. Here we do as well, but quickly shift gears into exploring the actual humans behind the stereotypes. In that lays the incredible power and charm of the film. This is not simply a fish out of water story, but it also has that aspect. To his later regret, Ben, the New Yorker, does not understand the local college football fan base. This is the best writing of any film I have seen this year. The writing (by B.J. Novak again, as is the direction and the actor for the leading character, Ben the New Yorker) is sharp, clever, and in many unexpected places, very deep and wise. I mentally rolled around in the dialog like a happy dog would roll around in something delightful. This is one of those low-budget, brilliant films that come along once in a while to give our ears and eyes a rest from explosions and dinosaurs and engage our thinking organs. It is fun and funny too, a bonus. Novak, the scriptwriter, might be a bit too earnest in portraying rustics as intellectuals who live in a remote areas. He is trying to elevate the rural folk by, in one case, having a cowgirl referencing Checkov. That sort of clunks. But the words he gives Ashton Kutcher to utter are profound, so a hit for him there.I think that actors as a group are capable of much greater things than they are typically asked to do in films. Novak asks a lot of his actors, and he gets a lot. Issa Rae plays the radio executive that Ben reports to. She is perfect in her portrayal of a driven, brilliant, and tremendously capable New Yorker but with just enough wisdom and compassion to prevent her from being the demonic presence we often get in movie descriptions of people of her place and stature.The players of the dead girl's family and friends are all outstanding as well.I like this ambitious, small-budget film quite a lot. The four sawblade movie takes a big bite and almost succeeds in producing a masterpiece. It is the best artistic film I have seen this year by a Texas mile. "Vengeance" has a hard R for violence, drug use, and adult themes. It runs for one hour and forty-seven minutes. I think this is the career-best role for Ashton Kutcher. I would watch this movie just to see him work. He is that good.