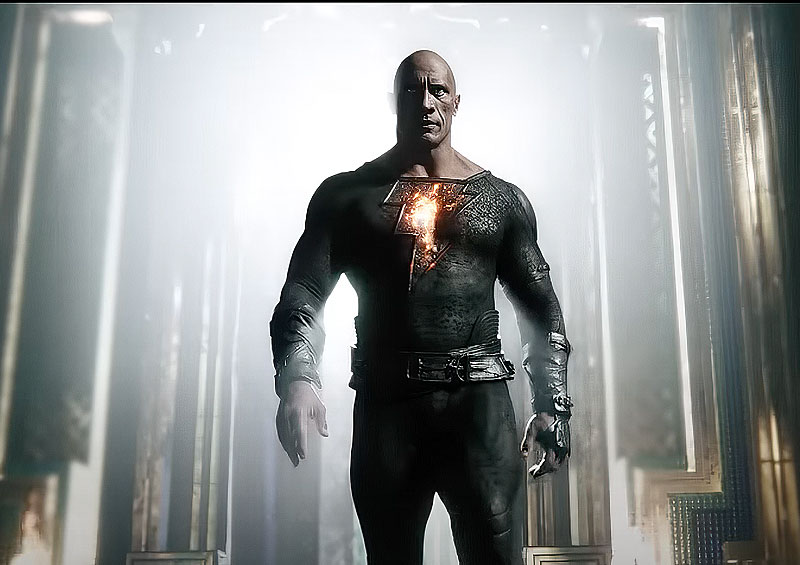 This is straight up superhero stuff. The film takes itself seriously.

I firmly believe that if a scrum of producers spends $200 million to make a movie, I should see it. We should do proper honor to the purse. And whatever else this film might be, it is a stupendous visual experience. It is loud, too, with massive battles between superbeings.

The movie makers here attempt to replicate the enormous success of the Marvel Comic films by rolling out this, the hoped-for first in a long series of movies based on the DC Comic universe of stories and characters. They give it their best shot with this budget and Dwayne Johnson in the title role. It works too.

Joining 'The Rock' is Pierce Brosnan, who appears as Doctor Fate. The good doctor is one of a group of superheroes in the Justice Society of America. His colleagues include Atom Smasher, Hawkman, and Cyclone.

Also appearing as archeologist Adrianna Tomaz is American actress Sarah Shahi. She has over sixty credits, but I know her best from her role on the TV series "The Rookie." Director Jaume Collet -Serra made the recent Dwane Johnson project "Jungle Cruise" and the Paris Hilton version of "House of Wax" in 2005. He has a good range of talent.

Thousands of years ago, the King of Kahudaq created a magic crown that bestowed superpowers upon the wearer. Today, an archeologist finds the artifact, but the Intergang, a rage of well-organized criminals, attacks her to grab the artifact. Much to the regret of the criminals, the archeologist manages to summon up "Black Adam." He has powers equal to those of Super Man. He is not at all shy about killing people. He has an ancient attitude about killing those who oppose him. His presence back in our time presents big problems for everyone on Earth. "Black Adam" is not exactly a bad guy, but he does have dangerous powers that he uses with less care than one would wish.

I found this a very entertaining movie. It is full of loud noise and colorful special effects. We never doubt that goodness will triumph, but we never have confidence about the cost of victory. That is good enough for me. This is straight-up superhero stuff. There is no wink wink, nod, nod business. The film takes itself seriously on its own terms.

"Black Adam" is a must-see, if not for the story, then for the spectacular special effects. This PG-rated film runs for two hours and four minutes. The public will decide if the DC Comics characters have the power of the Marvel Comics characters in the battle for the wallets of the movie-going public. I give "Black Adam" a better-than-expected four saw blades. I liked this movie.