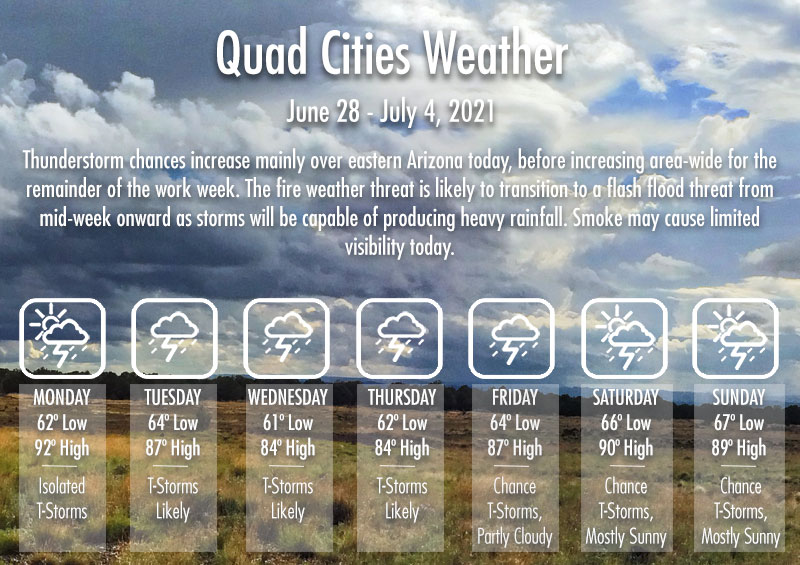 Look for monsoonal moisture this week

Thunderstorm chances increase mainly over eastern Arizona today, before increasing area-wide for the remainder of the work week. The fire weather threat is likely to transition to a flash flood threat from mid-week onward as storms will be capable of producing heavy rainfall.

An easterly surface wind shift behind a passing gust front earlier this morning has increased surface dew points in the Little Colorado River valley and across the White Mountains. Daytime heating and instability will lead to isolated to scattered showers and thunderstorms for mainly eastern Arizona and parts of the Navajo Nation beginning later this morning. Moderate rainfall, cloud to ground lightning strikes and gusty outflows are most favored for an area east of Payson to Chinle this afternoon.

While coverage is expected to generally decrease this evening, overnight showers are possible in central and western Arizona. Expect isolated storm coverage tonight, but updates may be needed if organized convection begins to move out into the west- central Arizona by later this evening.

Beyond monsoonal thunderstorm activity, breezy easterly to northeasterly winds will occur today. Gusts around 18-23 mph are possible outside of gusty and erratic winds caused by thunderstorm outflows. Temperatures in north-central Arizona are expected to be a few degrees above normal, while northeastern Arizona could be as much as 5-10 degrees below normal for daytime highs today. Smoke produced by area wildfires will be pushed southward again today into the Verde Valley and as far west as Prescott/Chino Valley. Areas of limited visibility from the smoke are possible.

Mid and lower level flow begins to turn southeasterly into Tuesday and, along with moisture from Hurricane Enrique, will help to create a much more moist boundary layer by Tuesday afternoon.

There is high confidence in an active period through mid week with the potential for heavy rain leading to flash flooding.

Ensemble guidance is creating a low to moderate confidence in the forecast for a slight downturn in monsoonal thunderstorm activity by this weekend. Even if a downturn does occur though, continue to expect at least areas of isolated to scattered thunderstorm coverage. 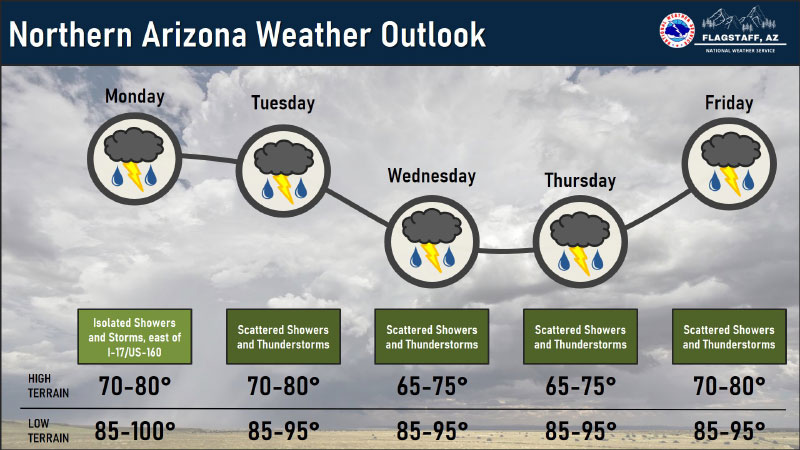