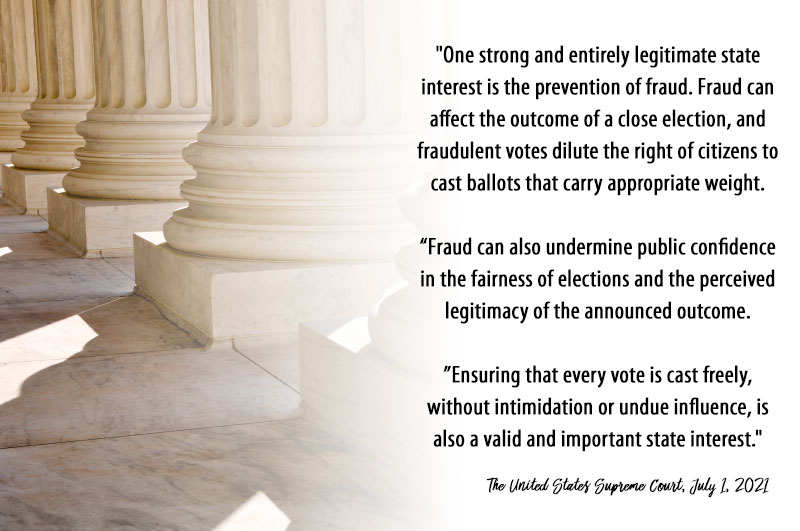 “Today is a win for election integrity safeguards in Arizona and across the country,” said Attorney General Mark Brnovich. “Fair elections are the cornerstone of our republic, and they start with rational laws that protect both the right to vote and the accuracy of the results.”

The Democratic National Committee (DNC) challenged Arizona’s regulation of ballot-harvesting and limitation on out-of-precinct voting in 2016. The DNC erroneously claimed the measures violated the Voting Rights Act (VRA) and that the ballot-harvesting law was enacted with discriminatory intent.  The U.S. District Court of Arizona rejected the DNC’s challenges after a full trial, but a majority of judges on the Ninth Circuit Court of Appeals reversed those findings to invalidate Arizona’s laws.

Today, the justices strongly refuted the DNC’s claims stating, “...neither Arizona's out-of-precinct rule nor its ballot-collection law violates §2 of the VRA." SCOTUS further concluded: "Under our form of government, legislators have a duty to exercise their judgment and to represent their constituents. It is insulting to suggest that they are mere dupes or tools."

In their decision, SCOTUS found: "One strong and entirely legitimate state interest is the prevention of fraud. Fraud can affect the outcome of a close election, and fraudulent votes dilute the right of citizens to cast ballots that carry appropriate weight. Fraud can also undermine public confidence in the fairness of elections and the perceived legitimacy of the announced outcome. Ensuring that every vote is cast freely, without intimidation or undue influence, is also a valid and important state interest."

Brnovich v. DNC has broad implications for the rest of the country. If SCOTUS had accepted the logic of the DNC, every voter integrity law in the country would be in jeopardy if it created any disparity between minority and non-minority voters.

Additionally, the majority of states require ballots to be cast in the correct precinct. Requiring voters to vote in their assigned precinct furthers important state interests in administering the election free from fraud and ensuring voters get a ballot with the correct local races.

General Brnovich consistently defended Arizona’s election laws in several other lawsuits filed by outside groups throughout 2020.

More background on Brnovich v DNC can be found here.