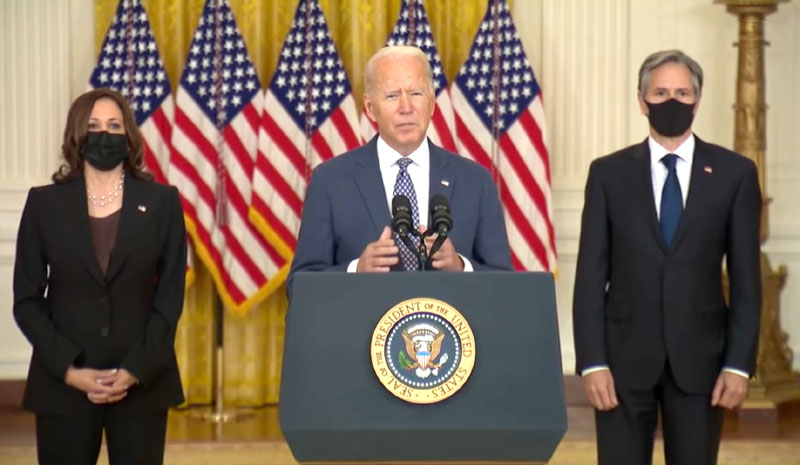 It is with heavy heart that I am compelled to write this special update.

Our great nation has been humiliated on a global scale due to incompetence, hubris and idiocy from the White House and the State Department. After four years under President Trump of record economic growth, global respect for our foreign policy, peace in the middle east, no terror attacks, and energy independence, the Biden Administration has wrecked everything in 7 months.

—because he banned new pipelines and production here.  Gas prices are at record highs.

As I write this, we do not know exactly how many U.S. citizens are trapped in Afghanistan. It is likely between 10,000-15,000.  There is desperation. People are so desperate some clung to the outside of airplanes—only to predictably fall to their death.

In February, Biden intentionally cancelled a Trump program put in place to rescue our people in Afghanistan.

Our military leaders told the trapped Americans they are on their own.   Even worse, the DOD has our troops feeding Afghan civilians and helping them come to the United States as “refugees” while claiming that Americans need to pay $2,000 to fly home, if they can get to the airport safely.

Americans, indeed the world, including the Taliban witnessed the horrific debacle in Afghanistan. Caught entirely flat-footed, Mr. Biden put forth the reprehensible and incompetent plan to withdraw United States troops before American civilians were safely removed.

Our military ground troops are the best in the world. But the Commander in Chief, and the Joint Chiefs of Staff led by the goofy Gen. Milley, who is preoccupied with homosexuals, cross-dressing and raising the rainbow flag across all of our embassies, have led our country into disaster. They have humiliated our nation. The State Department needs to wake up and understand we live in a real world of consequences.

Make no mistake, Joe Biden and Joe Biden alone is responsible for the terror hell that is now Afghanistan. Desperation is growing as efforts to evacuate tens of thousands of Americans is completely inhibited by Taliban-controlled checkpoints throughout the country. Joe Biden, the Commander in Chief, largely ignored or incompetently assessed months and months of plans submitted by the State Department and the Defense Department about the safe evacuation of the Americans residing in Afghanistan.

Joe Biden has brought shame and humiliation upon this country.  Instead of competence, we have a dereliction of duty that has now led to absolute chaos in Afghanistan. Our allies around the world feel completely betrayed by America. While French and British troops continue to go door-to-door in Afghanistan rescuing their trapped citizens, Mr. Biden decided it was a good idea to abandon our citizens before pulling our troops out who could have remained there long enough to ensure our citizens’ safe departure.

There is no defense of how Mr. Biden is handling this exit from Afghanistan. None. I supported President Trump and Mr. Biden’s decision to get American troops out of the failed 20-year war in Afghanistan. That war started with lies from the State department and ends with lies and incompetence from Mr. Biden.

The plan to achieve the withdrawal implemented by Mr. Biden and his woke generals is global embarrassment and deeply humiliating.  Worse, abandoning the countless number of Americans, including civilians and contractors, has now put their lives in danger.

We have since learned that in a July 13, 2021 memo, 23 different State Department officials warned the Secretary of State that the Taliban would make rapid territorial gains and recommended beginning evacuation flights of all American citizens living in Afghanistan on August 1st before withdrawing the United States military.  It is heartbreaking that Joe Biden ignored top State Department officials.

Sadly, we still have no answers to how many Americans remain stranded in Afghanistan.  On top of that, we have learned that Americans being rescued from Afghanistan may be responsible for reimbursing the federal government for as much as $2000 per person for the cost of their flight!  There are absolutely no words to describe how angry I am to hear this inhumanity. We also have not heard a coherent plan from Mr. Biden on how he intends to evacuate them safely or how long it may take.

We know nothing about Mr. Biden’s plans to get any of the billions of dollars in top military equipment that has now fallen into the hands of the Taliban. Mr. Biden has taken no questions about his decision to draw down troops before securing the safe passage out of Afghanistan for our citizens. Instead, Mr. Biden has been largely silent when pressed for answers or conveniently blames others.

Failure to get Americans out of Afghanistan in an orderly and safe manner is unconscionable and reprehensible on a global and historic scale.  The situation is rapidly deteriorating.  And what is Mr. Biden’s response to the Americans stranded:  “the United States government cannot ensure safe passage to the Hamid Karzai International Airport.”   Awful. Unconscionable. Impeachable.

What is happening in Afghanistan is horrific and the sole responsibility of one man: Joe Biden. There must be congressional investigations to get answers to these and many more questions to better understand how Mr. Biden made the decision to depart Afghanistan in this horrific manner.

JUST IN - U.S. Embassy warns “potential security threats" at #Kabul airport and is now “advising U.S. citizens to avoid traveling to the airport and to avoid airport gates at this time," in a new security alert. pic.twitter.com/aj0PaekvY2

Ranking Member @RepMikeRogersAL: "The President needs to wake up and give us a plan now for how we get our fellow Americans and allies safely out of Afghanistan.”https://t.co/LAybmMnSuR pic.twitter.com/UTNdHLm6YB

Blinken: Leaving Americans to get to the Kabul airport on their own is “the best way to do this.” pic.twitter.com/8Ocom7JsgL

Breaking: The Taliban have attacked district of Andarab again to seek revenge. A local told me: "the war is going on in earnest, that People Resistance group now have the strategic points, but the Taliban had taken their children and women hostage and demand fathers to surrender"