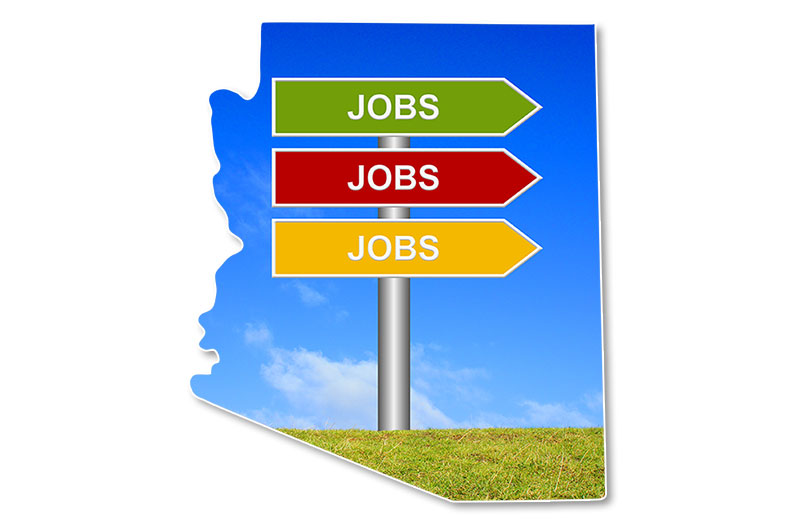 It’s all about jobs, the economy and being a leader

PHOENIX — More than 700,000 jobs will be created in Arizona in the next decade, another sign of Arizona’s economic prowess coming out of the pandemic.

According to a new report from the Arizona Office of Economic Opportunity (OEO), which studies the state’s economy and labor market trends, the state’s robust economic growth will far exceed the nation as a whole.

“Jobs, jobs, jobs - that’s the forecast for Arizona over the next 10 years,” said Governor Doug Ducey. “Our economy’s momentum continues to accelerate. Arizona has emerged as the destination for key high-tech, high-wage industries like semiconductors, electric vehicle manufacturing, startups and more. Over the next decade, Arizona will remain a leader in the U.S. for people, businesses and jobs moving to our state.”

The largest job gains are anticipated in the Education and Health Services (23,906 jobs annually) and Professional and Business Services sector. The Education and Health Services and Construction sectors are expected to see the fastest job growth rates at 3.2 percent and 2.7 percent annualized growth respectively. The report predicts job growth in all 15 counties and all sectors excluding government.

“Governor Ducey and Arizona business leaders have set the stage for a decade of exciting job growth and economic success,” said Sandra Watson, President & CEO of the Arizona Commerce Authority. “These projections are based on current trends and trajectories, which reflect the efforts of recent years to grow advanced manufacturing, diversify our economy, improve the state’s attractiveness for business and investment and rebound quickly from the pandemic. Arizonans will benefit from the creation of more quality jobs and greater opportunity throughout our state.”

According to a recent story, Arizona is recovering jobs lost during the pandemic faster than most other states, with the third-fastest jobs recovery in the nation. This comes on top of forecast-beating revenue collections reported by JLBC, another sign of economic strength. In addition, personal income in Arizona rose last year at a rate faster than nearly any state in the country.

Arizona is leading on economic and workforce development programs. Major companies including Intel, Taiwan Semiconductor Manufacturing Company (TSMC) and Lucid Motors have selected Arizona to build and expand their operations. Arizona has emerged as the number one place for new semiconductor investments and was recently dubbed by Forbes as “U.S. Semiconductor Central.”

The report follows the successful 2021 Arizona legislative session, which included the passage of the state’s largest tax cut in history that will allow every Arizona taxpayer to save more of their hard-earned money.