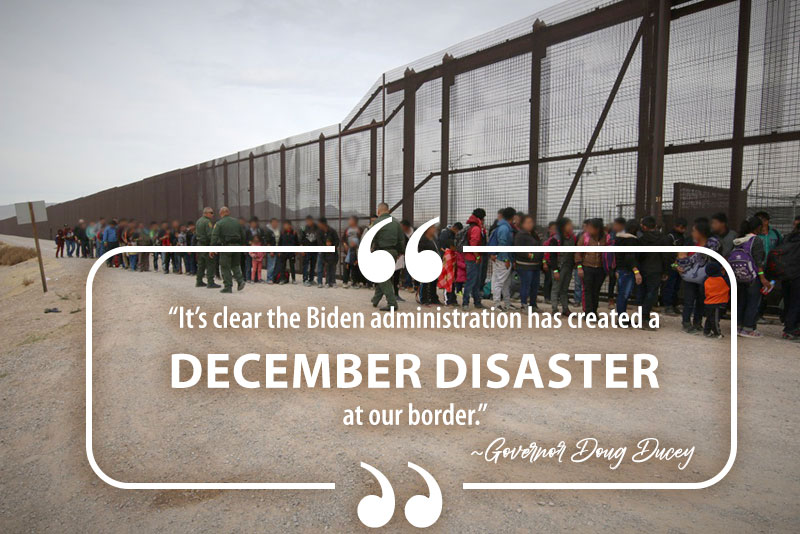 "We simply cannot stand by and watch this catastrophe unfold."

“It’s clear the Biden administration has created a December Disaster at our border,” said Governor Ducey. “As a result of piecemeal policy and a lack of federal involvement, U.S. Customs and Border Protection has been inundated. We simply cannot stand by and watch this catastrophe unfold. We are taking action at the state level to protect Arizonans and our communities. My thanks to the men and women of the Arizona Department of Public Safety, the members of the Arizona National Guard, the team at the Arizona Department of Homeland Security, members of the Border Patrol and the entire law enforcement community for your commitment to protecting Arizonans.”

The National Guard is sending the following resources to support the Department of Public Safety:

The Department of Public Safety and the National Guard are also deploying tactical resources to the areas where U.S. Border Patrol and intelligence indicate the most threatening incursions are occurring.

The Governor received a briefing from the U.S. Border Patrol, Arizona National Guard, Department of Homeland Security, Department of Public Safety and local law enforcement and he toured the mounting crisis at the border and its impact on the community. The Governor held a press conference following the tour and briefing.

This crisis means migrants are making the dangerous journey to the U.S., facing illness, violence and death. In September, federal authorities reported a family of three was found in the Yuma desert. The 37-year-old mother and her 10-year-old daughter were found dead from heat exposure and beside his mother’s body was a two-year-old boy found alive.

BACKGROUND
In March, Governor Ducey traveled to Douglas, Arizona to get a first-hand view of the security and humanitarian situation at the U.S.-Mexico border. After taking an aerial border tour, the Governor received a briefing and held a press conference and a border security roundtable.

In April, Governor Ducey issued a Declaration of Emergency and deployed the Arizona National Guard to the southern border to support local law enforcement efforts as the nation experiences a rapid increase in apprehensions and migrant children in federal custody.

The day after issuing the Declaration of Emergency, Governor Ducey toured Arizona’s border in Yuma and received a briefing on the escalating humanitarian and security crisis from Border Patrol, local law enforcement and community leaders.

In May, Governor Ducey joined 19 fellow governors to call on President Biden and Vice President Harris to reverse their destructive border policies.

On June 30, the Arizona Legislature passed and Governor Ducey signed the FY 2022 budget, which included $25 million in state funding for the National Guard border mission and $30 million to assist law enforcement with border security operations, in addition to existing funding for the Border Strike Force.

On August 13, Governor Ducey called for the resignation of Secretary of Homeland Security Alejandro Mayorkas following explosive leaked comments in which Mayorkas called the border crisis “unsustainable,” said “these numbers cannot continue” and said “if our borders are the first line of defense, we're going to lose.”

On September 20, Governor Ducey and 25 fellow governors requested an urgent meeting with President Biden to find meaningful solutions to the border crisis. Their hope was to meet with the president and his team directly to discuss actions the administration can take. Secretary Mayorkas responded two months later on November 24, but has not taken meaningful actions.

On October 6, Governor Ducey joined Texas Governor Greg Abbott and eight other governors in Mission, Texas for a border security briefing and press conference, where they detailed a ten-point plan for the Biden administration to resolve the border crisis.