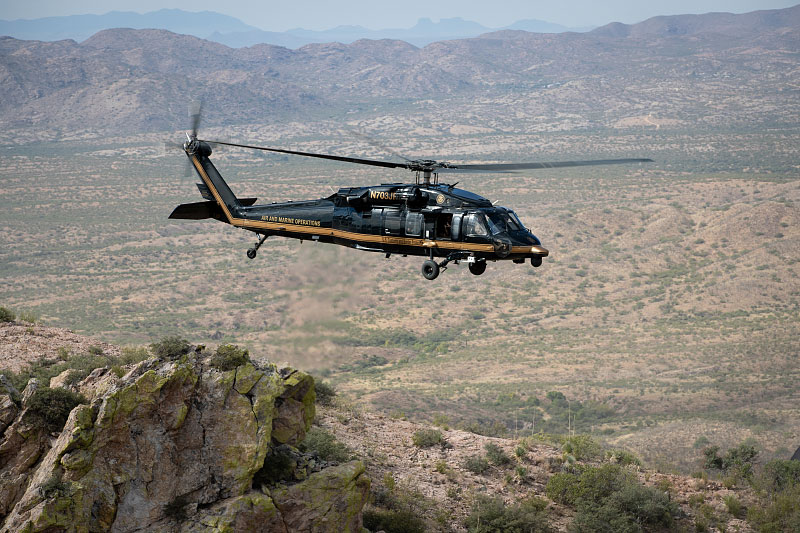 Air and Marine Operations and U.S. Border Patrol Rescue a Lost Migrant in the Baboquivari Mountains

‘Our agents are the lifeline between those in need and the rescue resources of CBP.'

On February 4, the Arizona Air Coordination Center received information Pima County/City of Tucson 911 center that a migrant was lost somewhere in the Baboquivari Mountains. The individual was advised to stay in place while agents responded.

“Twenty-four hours a day, 365 days a year, our agents in the A2C2 are answering the call from someone in trouble,” said A2C2 Acting Director Mark McComack.  “Our agents are the lifeline between those in need and the rescue resources of CBP.”

At approximately 7:00 p.m., the A2C2 advised Tucson Air Branch of the lost migrant and his presumed location and by 7:30 p.m. an AMO UH-60 Black Hawk crew from the Tucson Air Branch with a Tucson Sector Border Patrol Agent aboard had arrived in the area and located the migrant at an altitude of 5,500 feet on the southwest side of the Baboquivari Peak.

Based on the light conditions and terrain, the Black Hawk aircrew performed an intricate one -wheel landing near the migrant and deployed two Aviation Enforcement Agents and the Border Patrol Agent to assess the migrant. Once the migrant was ready for extraction the agents requested for the aircraft to return for a pickup. The aircrew made another one-wheel landing, and the migrant and agents were secured back in the aircraft. The migrant was transported to the Border Patrol facility near San Miguel, Arizona to determine if further medical attention was necessary.

“Every day our aircrews risk their lives to protect America or help or those in need,” said Deputy Director, Tucson Air Branch, Hunter Robinson.  “That could be anywhere from the mountains of Southern Arizona to the skies over Los Angeles for Super Bowl XVI”

AMO safeguards our Nation by anticipating and confronting security threats through our aviation and maritime law enforcement expertise, innovative capabilities, and partnerships at the border and beyond. With federal agents and mission support personnel, aircraft, and marine vessels operating throughout the United States, Puerto Rico, and U.S. Virgin Islands, AMO conducts its mission in the air and maritime environments at and beyond the border, and within the nation's interior.