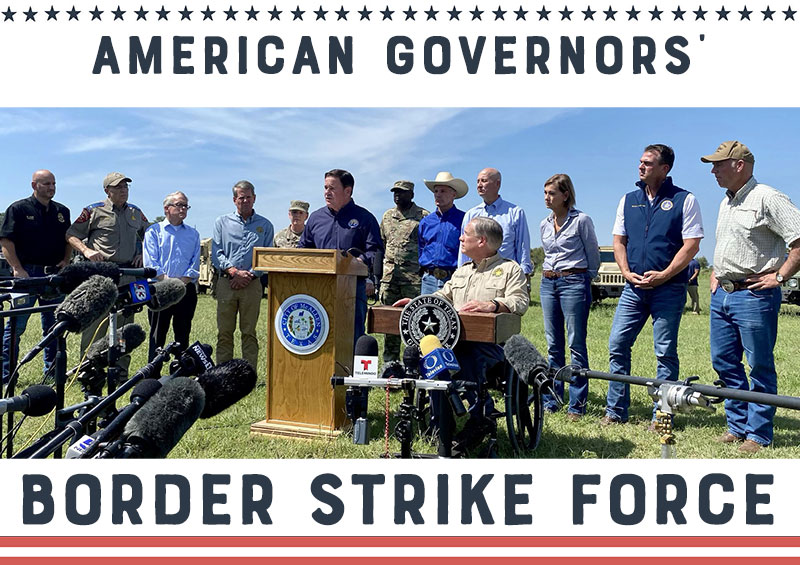 PHOENIX — Governor Doug Ducey and 25 other governors today launched the American Governors' Border Strike Force, a partnership to do what the federal government won’t: secure the southern border.

The American Governors' Border Strike Force announcement by Governor Ducey and Governor Greg Abbott of Texas comes a day after a report by the U.S. Customs and Border Protection that disclosed migrant crossings along the U.S.-Mexico border are at the highest level in two decades.

“What we’re doing in Arizona works,” said Governor Ducey. “But this is not just an Arizona issue, it’s a national issue. If our entire southern border isn’t secure, our nation isn’t secure. As dangerous transnational criminal organizations continue to profit from holes in the border and fill our communities with drugs, it’s no coincidence that we’re seeing historic levels of opioid-related deaths. The American Governors’ Border Strike Force will serve as a force multiplier in the fight against criminal activity directly tied to our border. My thanks to my fellow governors who saw the problem and chose to be part of the solution.”

The unprecedented collaboration among 26 states will fill the void created by federal inaction and work to secure the southern border by sharing intelligence, strengthening cybersecurity and improving efforts to protect children and families.

Today’s announcement comes as the Biden administration is preparing to lift Title 42, a common-sense policy that has helped secure the border.

In conversations with Governor Ducey, Border Patrol in Arizona expressed a need for more analytical and cyber assistance.

“Criminal organizations know how to exploit the crisis at the border, and are using it to flood massive quantities of fentanyl, heroin, methamphetamine and cocaine into our country,” said Tim Roemer, Arizona Department of Homeland Security Director and the state’s Chief Information Security Officer. “The Biden administration’s failed border policies have created a homeland security and humanitarian crisis — and every state in the country is paying the price. The American Governors’ Border Strike Force will increase collaboration and intelligence sharing across state lines so we can work together to keep illegal drugs out of our towns and cities.”

As a comprehensive force, states can act in cohesion across state lines to target transnational criminal organizations, and drug and human trafficking crimes financially and operationally.

The American Governors’ Border Strike Force will focus on these dangerous organizations, as the current largest threat to public safety at both state and local levels. By partnering across states, the Strike Force provides a force multiplier in the fight against criminal activity tied to the southern border.

The multi-state effort will:

While opioid-related deaths are at historic levels, fentanyl is streaming across the border and filling Arizona communities’ bloodstreams. Fentanyl overdoses have replaced car accidents as the leading cause of death for people 19 and younger in Pima County.

With record breaking migration leading to an overwhelming amount of apprehensions at the southern border, law enforcement is stretched too thin to effectively combat the cartels. This leads to more drugs entering the country, more dangerous individuals avoiding arrest, and more victims of human trafficking.

Governor Ducey and Governor Abbott first teamed up in December to form the collaboration.

You can watch a recreated video presentation of the Strike Force information:

Today’s announcement comes after months of work and collaboration among states to secure the southern border.

This month, Governor Ducey called on the Biden administration to maintain Title 42 to protect public health and safety.

In his January State of the State address, Governor Ducey proposed the idea for the American Governors' Border Strike Force. He said, “Texas Governor Greg Abbott and I are teaming up to form the American Governors' Border Strike Force – a commitment between states to do what the Biden administration is unwilling to do: Patrol and secure our border.”

On October 6, 2021, Governor Ducey joined Governor Abbott and eight other governors in Mission, Texas, for a border security briefing and press conference, where they detailed a ten-point plan for the Biden administration to resolve the border crisis.

On September 20, 2021, Governor Ducey and 25 fellow governors requested an urgent meeting with President Biden to find meaningful solutions to the border crisis. Their hope was to meet with the president and his team directly to discuss actions the administration can take. Secretary Mayorkas responded two months later on November 24, but has not taken meaningful actions.

On June 10, 2021, Governor Ducey and Governor Abbott sent a letter to all U.S. governors asking them to send available law enforcement resources to the border.

On May 11, 2021, Governor Ducey joined 19 fellow governors to call on President Biden and Vice President Harris to reverse their destructive border policies.