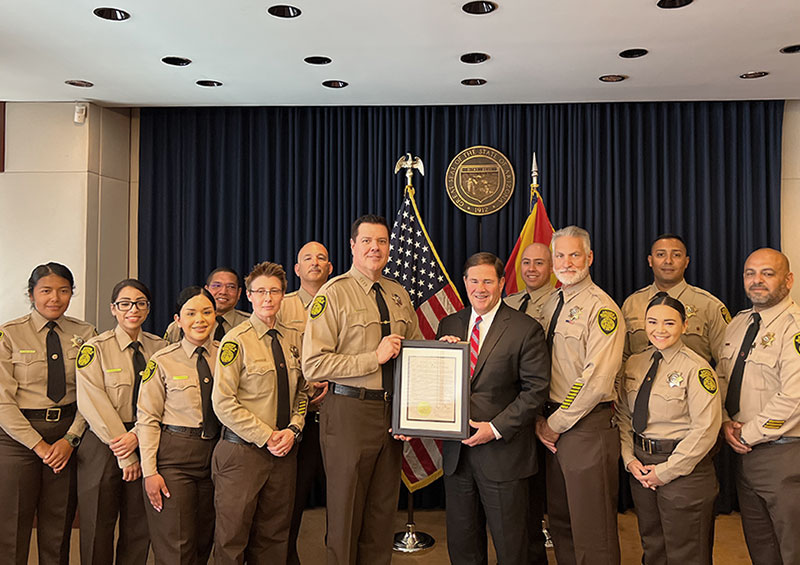 Governor Ducey expresses thanks for the states correctional officers

PHOENIX — Governor Doug Ducey today is expressing thanks for the state’s correctional officers and their dedication to public safety as he marks Arizona Correctional Officers and Employees Week.

“Arizona’s correctional officers and employees are the unsung heroes of law enforcement,” said Governor Ducey. “Every hour of every day, they show up to work and encourage, motivate and guide the men and women who are paying their debt to society. The job of a correctional officer is demanding and tough, and Arizona is grateful for their service, dedication and sacrifice.”

The governor met this afternoon with correctional officers and employees of the Arizona Department of Corrections, Rehabilitation and Reentry (ADCRR), and the Arizona Department of Juvenile Corrections (ADJC). He expressed his deep gratitude for the work of the departments to routinely provide direction, rehabilitative services and behavioral intervention for inmates.

A partnership between ADCRR and the Arizona Department of Economic Security (DES) eases the transition back into society for those who have served their time. Launched in 2017, Second Chance Centers expand opportunities for those nearing release by offering resources that lead to job readiness, including job skills training, résumé and interview preparation, on-site job fairs, enrollment in health care, transportation services and more. Under Governor Ducey’s leadership, ADCRR and DES have served nearly 17,000 inmates on parole through Second Chance Centers, Community-Based Reentry Centers and Parole Offices.

The Arizona Healthy Forest Initiative pairs ADCRR and the Arizona Department of Forestry and Fire Management (DFFM) to address the risk of wildfires. The program expands opportunities for state inmates to learn crucial job skills for post-sentence employment by treating our state’s land and wildlife. The skills learned through the program will help inmates find jobs upon release, reducing recidivism across the state and helping those who served their time build better lives.

Arizona has twelve inmate crews who are trained to be professional wildland firefighters. Crews are used during wildfire season to help with suppression efforts, but they are also used throughout the year on fuels mitigation projectsaround Arizona. Crews have also been used to help on special assignments, such as search and rescue, disaster clean up, sandbagging operations and other similar projects.

The governor recognized Arizona Correctional Officers and Employees Week with a proclamation, which can be viewed HERE. 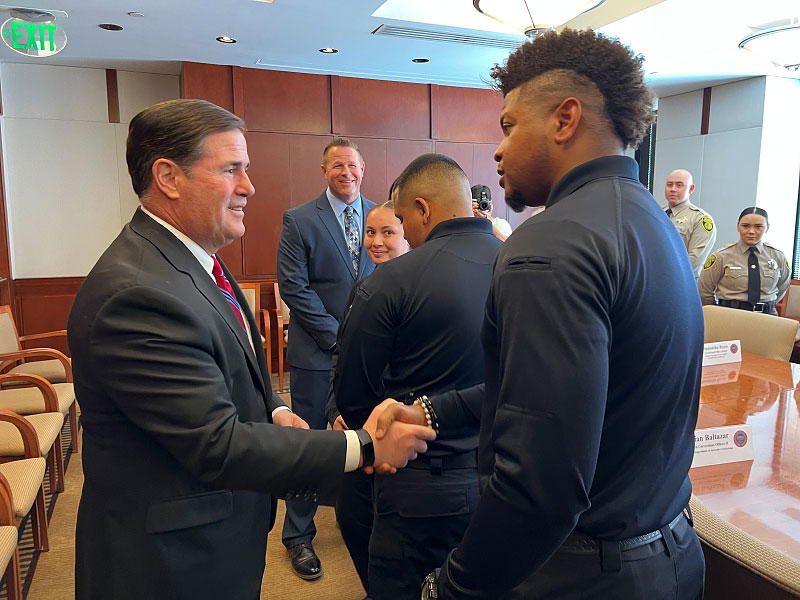