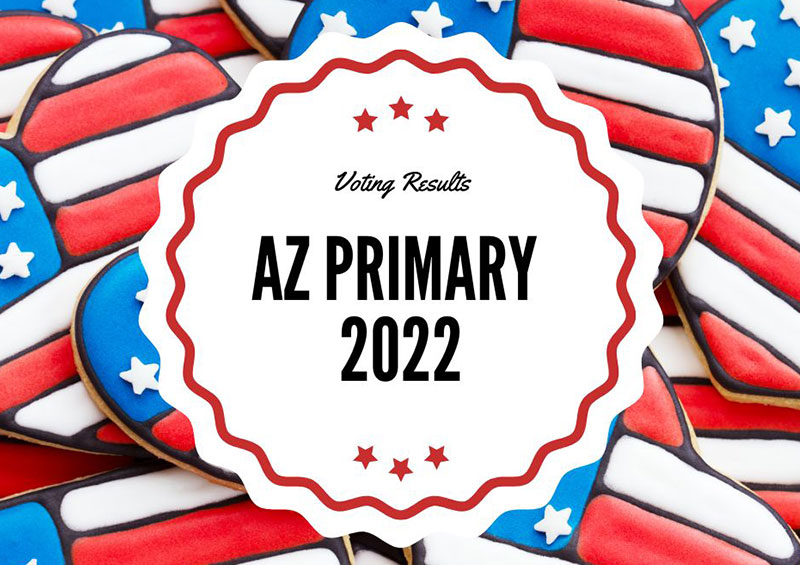 The counting isn’t over - not by a long shot.

Because many voters do not trust drop boxes due to the election controversies from the last two years, a lot of them chose to drop off their ballots in person at Polling Locations and Vote Centers. This has lead to a very large backlog of ballots to process, which should include adequate signature verification. That means we may not know who did or did not win for several days.

Probably the biggest question is in the governor’s race. Karrin Taylor Robson was leading by about 16K votes around 1 AM, and at one time, she was ahead by as much as 34K. But, by this morning Kari Lake has jumped ahead by about 4K votes and .6%. Wow!

Blake Masters jumped out to an early lead over opponent Jim Lamon, and is now considered the winner by many news outlets. (See accompanying article, Blake Masters for the Win.)

In other GOP state races, Mark Finchem is far and away the leader for AZ Secretary of State, with more than a 16% lead over the next contender, Beau Lane. It is likely that he’ll face Democrat Adrian Fontes, who used to be the Maricopa County Recorder.

For Attorney General, Abe Hamadeh has a 50K vote lead over Rodney Glassman, who is his nearest opponent. Assuming that lead holds, he’ll face Democrat Kris Mayes (originally from Prescott) in the General Election.

Kimberly Yee is leading Jeff Weninger by 29% for the State Treasurer seat.

Tom Horne is leading Shiry Sapir in the Superintendent of Public Instruction race by about 11%. If he wins, Horne will go up against Kathy Hoffman in the General Election.

According to the Yavapai County Recorder’s Office, there are still many more ballots to count:

Estimated number of ballots to process

The last report on the Yavapai County website is from about 4 AM. It will likely be updated this afternoon. Right now, it is, of course, unofficial and incomplete.

Currently, in the GOP race for US Representative CD2, Eli Crane has nearly a 14% lead over Mark DeLuzio, his nearest competitor. None of the candidates are from the Prescott area. If Crane prevails, he will go up against Democrat incumbent Tom O’Halleran.

In the GOP race for State Senator, Ken Bennett is leading Steve Zipperman by 160 votes. This is THE race to watch as those 17,000 ballots are counted. The winner will go up against Democrat Mike Fogel. It is definitely too close to call!

For State Representative, LD1, Quang Nguyen is the far away leader at 40.53%. But, two seats are open, and for the second candidate, Selina Bliss is leading Judy Burges by nearly 3,000 votes.

For the Justice of the Peace in Prescott, Mitch Padilla has a 2,300 vote lead over Andy Jolley.

We know for sure that Ron Williams won for Prescott Constable, he ran unopposed, and there are no opponents for the General election, either! Congratulations to Ron!

Both John Hughes from Dewey-Humboldt and Kell Palguta from Prescott Valley, were unopposed, so they won outright. Congratulations to both of them, also!