“Arizona has had enough,” said Governor Ducey. “We can’t wait any longer. The Biden administration’s lack of urgency on border security is a dereliction of duty. For the last two years, Arizona has made every attempt to work with Washington to address the crisis on our border. Time and time again we’ve stepped in to clean up their mess. Arizonans can’t wait any longer for the federal government to deliver on their delayed promises.”

The governor’s action comes just days after the Biden administration lifted the Remain in Mexico policy. This action is the latest in a series of misguided decisions related to border security by the federal government. The White House continues to demonstrate failed border policies, all but encouraging transnational criminal organizations to import illegal drugs across an unrestricted southern border in Arizona.

“Our border communities are being used as the entryway to the United States, overwhelming law enforcement, hospitals, nonprofits and residents,” Governor Ducey said. “It’s our responsibility to protect our citizens and law enforcement from this unprecedented crisis. With the resources and manpower in the right places, our Border Patrol and law enforcement will be better equipped to do their jobs well and prevent cartels from exploiting our communities. That’s exactly what our barrier mission will do."

Fortifying the border will be 60 double-stacked shipping containers, reinforced with concertina wire at the top. 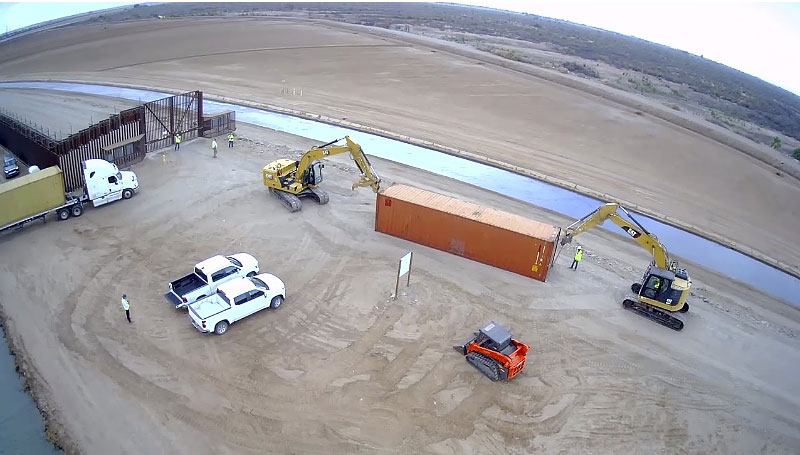 The shipping containers will reach about 22-feet high. The state-owned, 8,800-pound, 9-by-40-feet containers will be linked together and welded shut. The panels of the border wall constructed during the Trump administration are 30-feet high.

Construction began Friday morning on the thousand-foot gap in the border wall near Yuma, Arizona. Emergency management contractor Ashbritt is constructing the barriers. The 25-person team includes heavy equipment operators, operation supervisors and a safety manager. The project will be completed over the weekend.

The barrier mission delivers on the most meaningful border security legislationin Arizona history, which passed the Arizona Legislature this year. Of the $335 million investment in the Arizona Border Security Fund to construct and maintain a border fence, it will take $6 million to fill the thousand-foot gap in Yuma.

“National security starts with border security. Biden’s border crisis deteriorates daily while the White House is silent,” said Jonathan Lines, Yuma County Supervisor. “Border communities like Yuma bear the burden of a broken border while narcotics poison our youth, human smuggling rises and mass amounts of migrants wear on our nonprofits. Beyond that, the seizure of counterfeit products at our ports of entry affects American businesses. Governor Ducey has been a consummate partner, coordinating and leading state and local resources to do what the federal government won’t: secure the border.”

The Yuma border wall gap is a notorious opening in United States border security through which thousands of migrants and an unimaginable number of lethal narcotics flow through every day.

The Yuma Sector saw 235,230 migrant encounters from October 2021 to June 2022 – an ominous acceleration for the sector which already experienced the highest yearly increase among all sectors in fiscal year 2021.

Nonprofits and shelters in Yuma County that assist migrants have been over capacity for months, with capacity ranging from approximately 115 to 160 percent.

“The Yuma community does not have the infrastructure to handle thousands of people crossing the border in need of food, shelter and medical services,” said Yuma Mayor Doug Nicholls. “The surge of migrants the federal government has allowed to trek over the border has the grave potential to greatly impact and strain our community. Washington must send a clear message that this is not the way to immigrate to our country. Too many migrants make the treacherous journey that puts their lives in danger and exposes them to exploitation by cartels. Yuma has experienced the worst of the border crisis. We’re grateful to Governor Ducey for ingraining himself in this issue and finding solutions.”

It’s not just people coming across the border – it’s also lethal drugs. The broken border has empowered the cartels to funnel a shocking amount of fentanyl into Arizona communities. Over 2,400 pounds of fentanyl has been seized in Arizona’s sectors so far this fiscal year. Last year, fentanyl overdoses replaced car accidents as the leading cause of death for people 19 and younger in Pima County.

All this adds up to overwhelmed community resources and law enforcement who work around the clock to give migrants the care they need and keep dangerous drugs off the streets.

“The White House lacks a sense of urgency and detail while the border crisis gets worse every day. In Arizona, we put our money where our mouth is,” said Tim Roemer, Arizona Department of Homeland Security Director and the state’s Chief Information Security Officer. “The brave men and women of law enforcement need this support so they can conduct their important work catching the people who don’t want to get caught and stopping lethal drugs from coming over the border. Governor Ducey once again showed he’ll take action to secure the border and give law enforcement every resource in the state’s power.”

The governor’s action aims to reinstate law and order at the border, freeing law enforcement from burdensome processing back to securing the border.

“I’m glad to see our taxpayer dollars going to support our border communities,” said Senate President Karen Fann. “Senate Republicans prioritized physical barriers this year to stop the flow of fentanyl, end human trafficking and protect our citizens. I’m grateful to work with Governor Ducey and my legislative colleagues to get the job done and secure the border.”

“Republicans in the Legislature made border security a priority in this year’s budget, and I’m thankful to Governor Ducey for wasting no time in putting those funds to good use,” said Rep. Ben Toma. “Improvements to the border wall will make our communities safer by combating human trafficking and stemming the flow of fentanyl into the state.”

Governor Ducey has a strong track record of taking action and supporting efforts to secure the border.

Governor Ducey signed on June 30, 2022 the most meaningful border security legislation in Arizona history, a plan to make record investments in protecting the state from the unprecedented crisis confronting our communities and law enforcement. The fiscal year 2023 budget, dedicates a record $564 million to help to secure our border with a physical barrier, address critical public safety staffing shortages, and modernize the technology and public safety equipment to target criminal activity and keep our citizens safe.

On May 11, 2022, the governor called on the leaders of social media companies to step up and take action to protect youth from cartel recruiting messages luring them into transnational human smuggling activity.

On April 19, 2022, Governor Ducey and 25 other governors launched the American Governors' Border Strike Force, a partnership to do what the federal government won’t: secure the southern border. Governors Ducey and Abbott joined Martha MacCallum on Fox News to talk about the initiative that same day.

On April 1, 2022, Governor Ducey called on the Biden administration to maintain Title 42 to protect public health and safety.

In his January State of the State address, Governor Ducey proposed the idea for the American Governors' Border Strike Force. He said, “Texas Governor Greg Abbott and I are teaming up to form the American Governors' Border Strike Force – a commitment between states to do what the Biden administration is unwilling to do: Patrol and secure our border.”

On December 7, 2021, the governor surged and repositioned Arizona’s public safety resources to address the Biden Border Crisis in Yuma, Arizona.

On October 6, 2021, Governor Ducey joined Governor Abbott and eight other governors in Mission, Texas, for a border security briefing and press conference, where they detailed a ten-point plan for the Biden administration to resolve the border crisis.

On September 20, 2021, Governor Ducey and 25 fellow governors requested an urgent meeting with President Biden to find meaningful solutions to the border crisis. Their hope was to meet with the president and his team directly to discuss actions the administration can take. Secretary Mayorkas responded two months later on November 24, but has not taken meaningful actions.

On June 10, 2021, Governor Ducey and Governor Abbott sent a letter to all U.S. governors asking them to send available law enforcement resources to the border.

On May 11, 2021, Governor Ducey joined 19 fellow governors to call on President Biden and Vice President Harris to reverse their destructive border policies.

On April 20, 2021, ​​Governor Ducey issued a Declaration of Emergency and deployed the Arizona National Guard to the state’s southern border to support local law enforcement efforts.